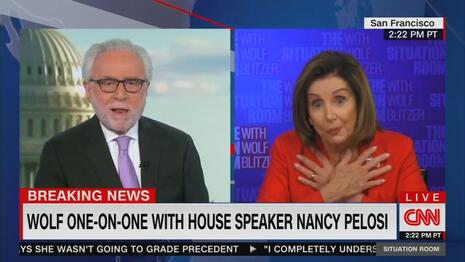 Christmas came early for those wanting CNN to resemble a real, serious news organization (albeit for only 14 minutes). On Tuesday’s Situation Room, host Wolf Blitzer hammered Speaker Nancy Pelosi (D-CA) for refusing to accept any and all offers of compromise for coronavirus stimulus from Republicans and the White House.

In response, Pelosi melted down at the idea of facing adversarial questions, repeatedly snapping at Blitzer as a Republican “apologist” and Trump supporter who doesn’t “know what you’re talking about” and, unlike the federal government, wasn’t helping to feed and provide aid to the less fortunate.

Blitzer began with a rather basic question:

And as you know, there are Americans who are being evicted from their homes. They can't pay their rent. Many Americans are waiting in food lines for the first time in their lives. Can you look them in the eye, Madam Speaker, and explain why you don't want to accept the President's latest stimulus offer?

Pelosi was immediately incensed, demanding he “ask the same question of the Republicans about why they don't really want to meet the needs of the American people.” She continued to meander and Blitzer interjected that not only do Americans “need the money right now,” but members of her own party were frustrated.

He cited Congressman Rho Khana (D-CA) as just one example, but Pelosi replied by dismissing Khana and citing not only Blitzer as a GOP “apologists,” but his colleagues as well: “I don't know why you're always an apologist — and many of your colleagues — apologists for the Republican position. Ro Khana? That’s nice. That isn’t what we’re going to do and nobody’s waiting until February.”

The first of many cross-talks ensued, ending with Blitzer reminding her that “don't let the perfect, as they say here in Washington, be the enemy of the good,” while Pelosi continued to go after Blitzer: “Do you have any idea what the difference is between the spending that they have in their bill and that we have in our bill?”

Blitzer brought up Andrew Yang as someone else who was interested in a deal and, sure enough, Pelosi dismissed both Khana and Yang, again accused Blitzer of being an apologist for the GOP and the President (click “expand”):

BLITZER: Yesterday, I spoke yesterday to Andrew Yang, who says the same thing. It's not everything you want —

PELOSI: Yeah, but you know what?

BLITZER: — but there’s a lot there.

BLITZER: — I’m not an apologist. I'm asking you serious questions because so people are in —

PELOSI: I’m saying to you —

BLITZER: — now. Let me ask you this. When was the last time —

BLITZER: — well, let me ask you when was the last —

PELOSI: If you’re going to answer your own questions —

BLITZER: — time, Madam Speaker — when was the last time you spoke with the President about this?

PELOSI: — I don't speak to the President. I speak to his —

BLITZER: Why not? Why not call him?

PELOSI: What makes me amused if it weren't so sad is how you all think that you know more about the suffering of the American people than those of us who are elected by them to represent them at that table.

Pelosi’s arrogance continued as Blitzer brought up the bipartisan Problem Solvers Caucus, and like with the others, she showed antipathy and disregard for their concerns.

But the most baffling moment came when Blitzer called out Pelosi on the possibility she’s refused to accept a deal because she doesn’t want to allow Trump “to take credit if there’s a deal that would help millions of Americans right now?”

A stunned Pelosi was torqued and got even more personal in her attacks against Blitzer by questioning his intelligence (click “expand”):

PELOSI: With all due respect, with all due respect — and you know we’ve known each other a long time, you really don't know what you're talking about. If the plural of anecdote is not data — yes, there’s some people said this or that. Overwhelmingly, my caucus wants what is right for the American people. Overwhelmingly, our chairmen, who wrote the bill, read their statements. They all put out their own statements when they saw what the White House was proposing. So do a service to the issue and have some level of respect for the people who have worked on these issues, written the bill to begin with. Now, let me just say this in terms of the numbers. I want people to do the math. We had 3.4, which would make the needs of the American people for a sustained period of time, so that there was some certainty in what would happen. The Republicans said no. Well, so we took it down a trillion dollars by cutting the time. We took it down another $2 trillion — $200 trillion — excuse me, $200 billion so we are $1.200 billion dollars down. We came down to 2.2. At the same time — since tomorrow will be five months since we passed the bill — at the same time, because there was no resolution, Mitch McConnell said let's pause. The virus didn't pause. And now we’re at a place where we need more money. We need more money for PPP — for our small businesses. We need more money for our airlines. We need more money for our schools. So we have absorbed nearly half a trillion dollars more of expenses, still within the 2.2 —

BLITZER: I understand all of that and I have only the —

PELOSI: — by cutting back.

BLITZER: — greatest respect for you.

PELOSI: So, do the math.

PELOSI: We have come down —

BLITZER: — I have only the greatest respect —

BLITZER: I just want to point out, though. $1.8 trillion dollars — $1.8 trillion is a lot of money. The American people need that money ASAP because they’re suffering right now and I'm not saying it's perfect.

BLITZER: I care, of course, how it’s spent, but what I don’t understand —

PELOSI: But you don't even know how it's spent.

PELOSI: You don't even know how it's spent.

BLITZER: — talk to the President personally, call him up, say, “Mr. President, let's get a deal tomorrow.”

Blitzer tried to wrap it up by acknowledging he not only respects her, but also Khana, the Problem Solvers Caucus, and Yang (seeing as how she doesn’t) because all they want is “a deal because so many people right now are suffering.”

Pelosi then accused him of having “been on jag, defending the administration all this time with no knowledge of the difference between our two bills” and admitting she “hate[d]” to see that Blitzer didn’t accept her narrative.

Again, Blitzer tried mightily to end the interview, but Pelosi kept wanting to have the last word and work in a few more jabs about Blitzer and anyone daring to refute her.

At one point, Pelosi wanted to know if Blitzer had helped the poor he sees in Washington D.C. because the reason those people have help has been due exclusively to the government (click “expand”):

BLITZER: Madam Speaker, these are incredibly difficult times right now and we’ll leave it on that note. Thank you so much for joining us.

PELOSI: No, we will leave it on the better note that you are not right on this, Wolf, and I hate to say that to you.

BLITZER: And it's not about me. It's about millions of Americans who can't put food on the table, who can't pay rent and are —

BLITZER: — getting by on these —

BLITZER: I know you are.

PELOSI: And we know them.

PELOSI: We represent them and we know them.

BLITZER: As we say —

PELOSI: And we know them. We represent them.

BLITZER: — don't let the perfect be the enemy of the good as they say.

PELOSI: It is nowhere near perfect.

PELOSI: Always the case but we’re not even close to the good.

BLITZER: — alright. Let's see what happens because every day is critically, critically important. Thanks so much for joining us

PELOSI: Thank you for our sensitivity to our constituents’ needs.

BLITZER: I am sensitive to them because I see them on the street, begging for food, begging for money. Madame Speaker, thank you so much.

BLITZER: We’ll continue this conversation down the road for sure.

For those interested in learning more about the MRC’s Conservatives Fight Back page, go here.

To see the relevant transcript from October 13, click here to read it as a PDF.