NBC’s flagship affiliate WNBC in New York City faced a well-deserved backlash tsunami on Thursday for an ugly piece that appeared to blame the rise of anti-Semitic attacks in the city and surrounding communities on....Jewish people themselves. 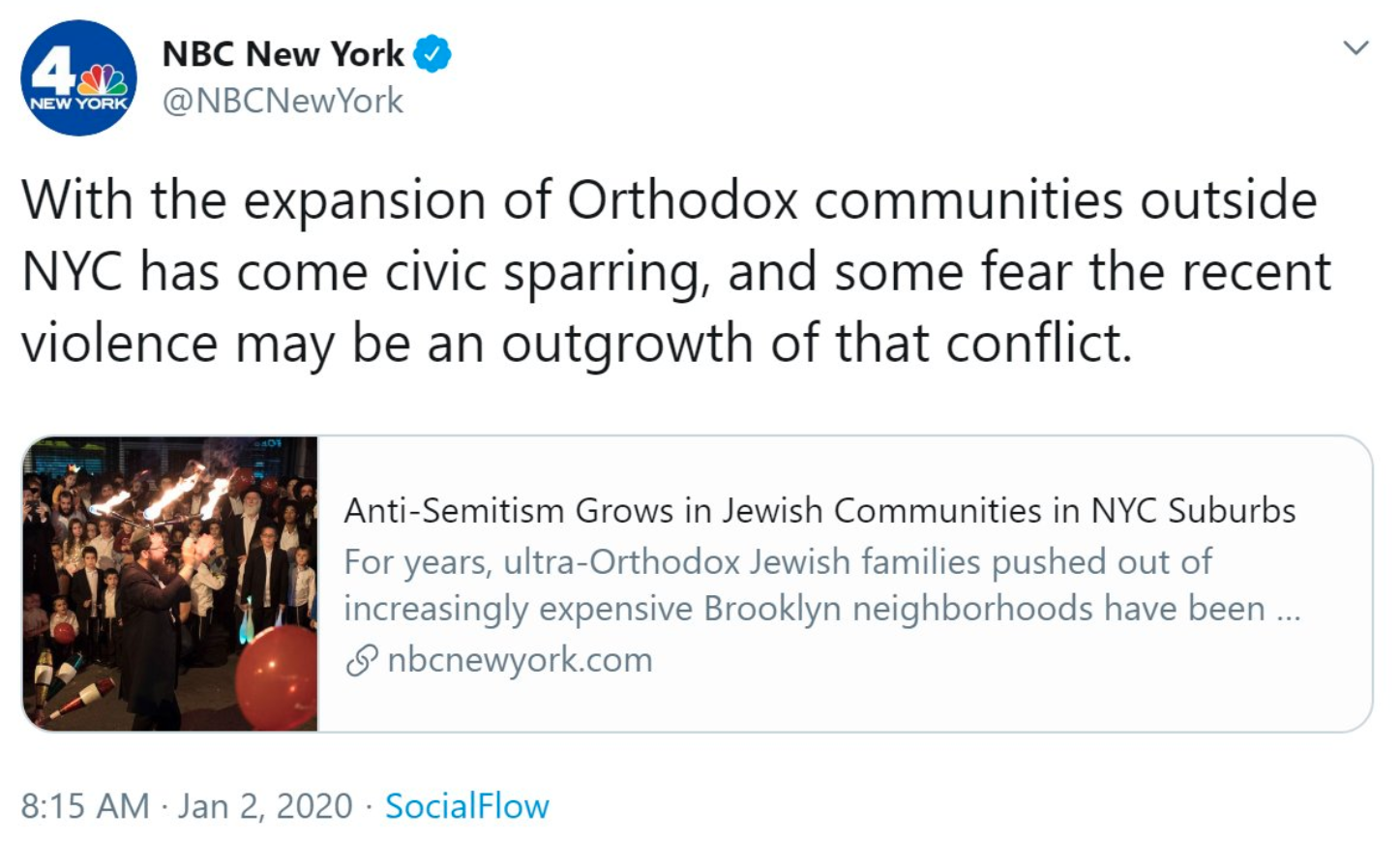 Very quickly, the ratio was on with people from across the political spectrum denouncing the tweet and points in the piece itself that, in the words of New York Times columnist and editor Bari Weiss, was akin to “blaming cross burnings on the expansion of black communities.”

For a sampling of those who condemned WNBC, our friends at Red State and Twitchy have round-ups here and here.

Hours later, the tweet was deleted and replaced with one that made things worse and offered quite the measly apology/non-apology: “We are deleting an earlier tweet regarding a story on the recent anti-Semitic attacks in the tri-state area. A new tweet follows; we regret the error.”

As for the new tweet, the caption mirrored the article: “Anti-Semitism grows in Jewish communities in #NYC suburbs.”

Unfortunately, it wasn’t just the tweet that came across as victim-blaming. The article itself was too. In point one of the “What to Know” section at the top of the piece, it originally read: “With the expansion of Orthodox communities outside NYC has come civic sparring, and some fear the recent violence may be an outgrowth of that conflict.”

Without an author’s note, it was changed by dropping everything after “sparring.”

In the body, it began by passing the blame from perpetrators to Jews in graph two (click “expand”):

The expansion of Hasidic communities in New York's Hudson Valley, the Catskills and northern New Jersey has led to predictable sparring over new housing development and local political control. It has also led to flare-ups of rhetoric seen by some as anti-Semitic.

Now, a pair of violent attacks on such communities, just weeks apart, worry many that intolerance is boiling over.

On Dec. 10, a man and woman killed a police officer and then stormed into a kosher grocery in Jersey City, fatally shooting three people inside before dying in an hours-long gunfight with police. The slayings happened in a neighborhood where Hasidic families had recently been relocating, amid pushback from some local officials who complained about representatives of the community going door to door, offering to buy homes at Brooklyn prices.

Yikes. So again, this is NBC News’s way of that people moving into other neighborhoods are responsible for a lack of harmony and cause for concern because, well, they’re Jewish.

Further down, the article continued the bashing of Jews (click “expand”):

Yet the tone of the debates over growth in some areas where Hasidic families have been moving has been more intense.

In East Ramapo, there were legal fights after Hasidic voters, who generally do not send their children to public schools, elected a majority of members of the local school board.

Rockland County Executive Ed Day said the arguments over housing density involve legitimate policy issues and are the biggest challenge when it comes to accommodating the growing Orthodox Jewish community.

The Orthodox community has special needs, he said, like housing for large families and residences within walking distance to a synagogue. That creates "demands that are counter to many of the communities they're residing in," Day said.

That’s unless you’re CNN’s The Lead host Jake Tapper, who actually stepped up and had a terrific segment on December 30 about how anti-Semitism cuts across all ethnic, political, and racial lines.