It was a great day for the pro-life cause on Tuesday as the board of the abortion group Planned Parenthood embarrassingly fired president and Dr. Leana Wen after only eight months on the job. Unfortunately, ABC’s World News Tonight and the CBS Evening News saw no reason to inform their viewers about Wen’s ouster as the organization charged with murdering unborn children has found itself in dire financial straits.

In contrast, this was the second story covered on NBC Nightly News with a full, one-minute-and-41-second report from White House correspondent Kristen Welker.

Anchor Lester Holt stated in the lead-in that there was “breaking news tonight of a shake-up at Planned Parenthood” which “forc[ed] out its President after less than a year on the job, and it comes amid a battle over new and more restrictive abortion laws across the country.”

Welker then went to work revealing that Wen tweeted late Tuesday afternoon that “the [Planned Parenthood] Board ended my employment at a secret meeting” because, as she later stated in a letter, the two sides had “philosophical differences over the direction” of the organization.

The NBC correspondent again quoted the physician, who asserted that she didn’t agree with the board’s belief that they should “double down on abortion rights advocacy.”

Perhaps equally important was what Welker stated next, which was the possibility that a new Trump administration “rule barring federally-funded family planning clinics from providing referrals for abortion” that could spell doom for Planned Parenthood’s finances to the tune of “about $60 million a year” in losses.

In part, Welker concluded by citing that the regulation was in addition to legislation in states across the country “restrict[ing] access to abortion,” mirroring President Trump’s insistence that protecting life “has long been a key priority and campaign promise.”

The details of Wen’s firing grew even more intriguing as, according to sources speaking to BuzzFeed’s Ema O’Connor, Dr. Wen had refused to “use ‘trans-inclusive language’” because she believed that Planned Parenthood invoking transgender people would be a turnoff to “people in the Midwest.”

“Wen sometimes went through PP's press releases and docs, deleting the word ‘sexual’ from the phrase ‘sexual and reproductive health,’ the source said. She also resisted using ‘abortion’ as a stand-alone, preferring ‘abortion care’ or other phrases entirely,” O’Connor added. The full story by O’Connor and colleague Ruby Cramer can be found here. 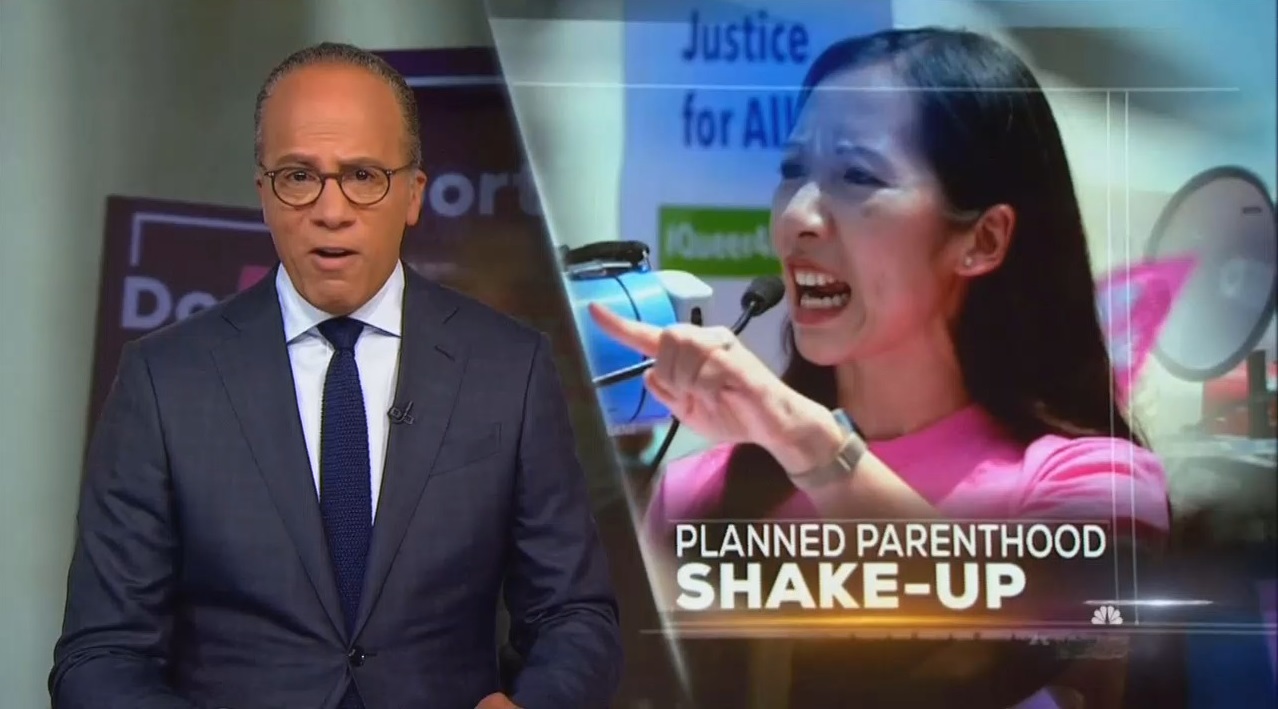 LESTER HOLT: There is breaking news tonight of a shake-up at Planned Parenthood. The organization forcing out its President after less than a year on the job, and it comes amid a battle over new and more restrictive abortion laws across the country. NBC's Kristen Welker has late details for us.

[ON-SCREEN HEADLINE: Breaking News; Head of Planned Parenthood Says He Was Forced Out]

KRISTEN WELKER: Tonight with abortion rights under fire, the President of Planned Parenthood, Leana Wen says she was forced out of her job today. Wen tweeting, “I just learned that the....Board ended my employment at a secret meeting.” And in a letter to employees adding, the move comes amidst “philosophical differences over the direction” of the organization. The board has decided to, “double down on abortion rights advocacy.” Planned Parenthood thanked Wen for her service. A source familiar with her departure tells NBC News, it was due to management style and lack of political savvy. Wen was the first physician to lead the organization in decades.

LEANA WEN: We will win because we are standing on the right side of history.

PRESIDENT DONALD TRUMP [on 06/26/19]: And we're proudly defending the sanctity of life.