On Friday morning, our friend and Daily Caller editor Amber Athey uncovered the latest batch of embarrassing, old tweets from newly-hired New York Times editorial board member and resident racist Sarah Jeong in which she targeted men and police.

Athey explained that she did “[a] search for ‘cops’ and ‘police’ on Jeong’s Twitter reveals an extensive history of anti-cop sentiment and a lack of sympathy for police who are injured on the job” and she found quite the batch of results.

Concerning the male species, she tweeted on numerous occasions about wanting to kill men and quipped that all “bad men” should be killed even if that meant that every single male met their end.

Replying to Glitch’s Anil Dash, Jeong tweeted that “anyways my point is that we should kill all the men *prior* to removing the state from marriage as an institution.” Athey added that, during the last election season, Jeong simply tweeted: “fuck white women lol.”

Here’s a screencap of those (again, h/t: Daily Caller): 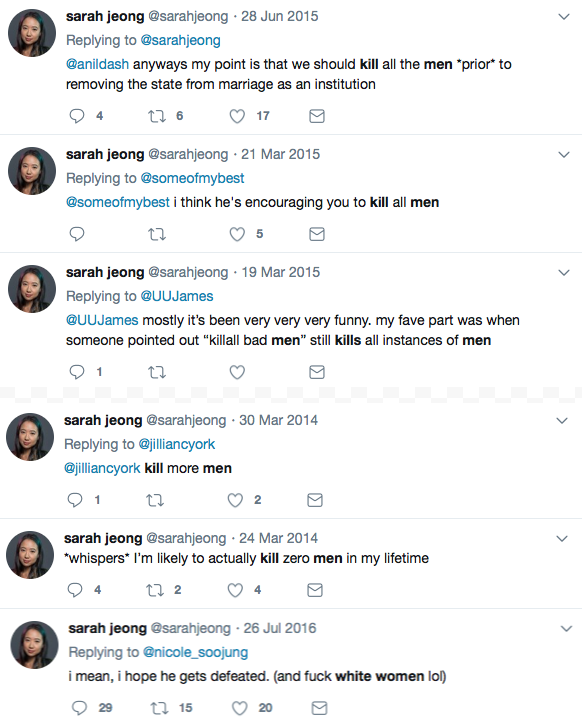 However, much of her scorn was leveled against police officers, ranging from just cursing them to banning police to quipping about dead cops: 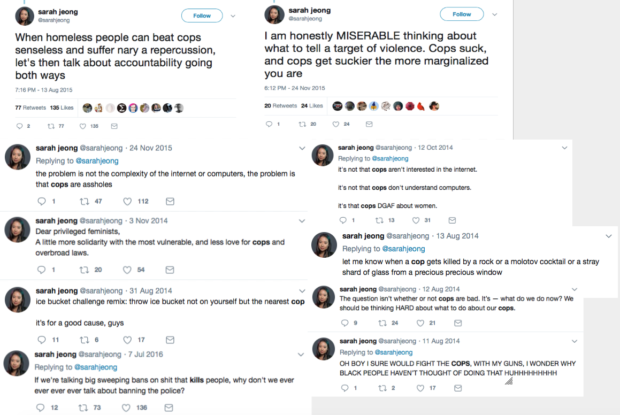 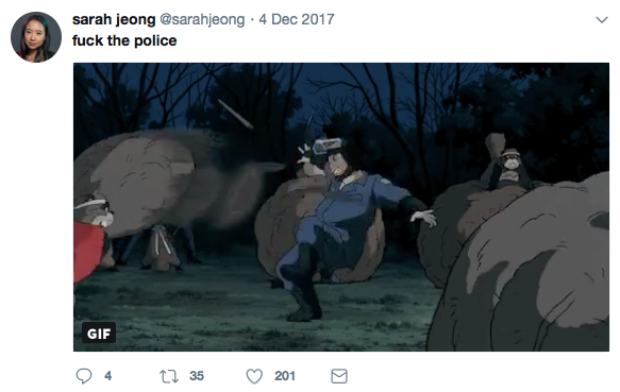 “When homeless people can beat cops senseless and suffer nary a repercussion, let’s then talk about accountability going both ways,” she tweeted on August 13, 2015.

“If we're talking big sweeping bans on shit that kills people, why don't we ever ever ever ever talk about banning the police,” she wrote on July 7, 2016.

Athey summarized a few others:

In one tweet from 2014 she wrote, “let me know when a cop gets killed by a rock or molotov cocktail or a stray shard of glass from a precious precious window.”

Despite these new tweets, it’s safe to say that The Times will still proudly stand behind Jeong as it further proves the double standard when it comes to far-left outlets hiring anyone who offers the slightest of contrarian views.