Since Sunday night, the liberal media have been haranguing network affiliate owner Sinclair Broadcast Group (SBG) for a new “must-run” promo that warned against “biased and false news.” The two have slammed it as Trump-backed “state-run TV” on par with China’s CCTV, Russia Today and the former Soviet outlet Pravda that the two channels have deemed “chilling,” frightening” and “a really embarrassing moment for journalism.”

Both networks have skin in the game regarding Sinclair’s ownership of 173 stations (and possibly more after a proposed merger with Tribune’s stations) with MSNBC’s parent network being NBC. Sanctimonious CNN has unleashed its fury on Sinclair in part because Sinclair’s merger with Tribune has a rosier outlook than the one involving CNN parent company Time Warner and AT&T.

On MSNBC, segments appeared every hour from Morning Joe at 6:00 a.m. Eastern to The 11th Hour ending at midnight (with the lone exception being the 10:00 p.m. Eastern hour’s The Last Word). 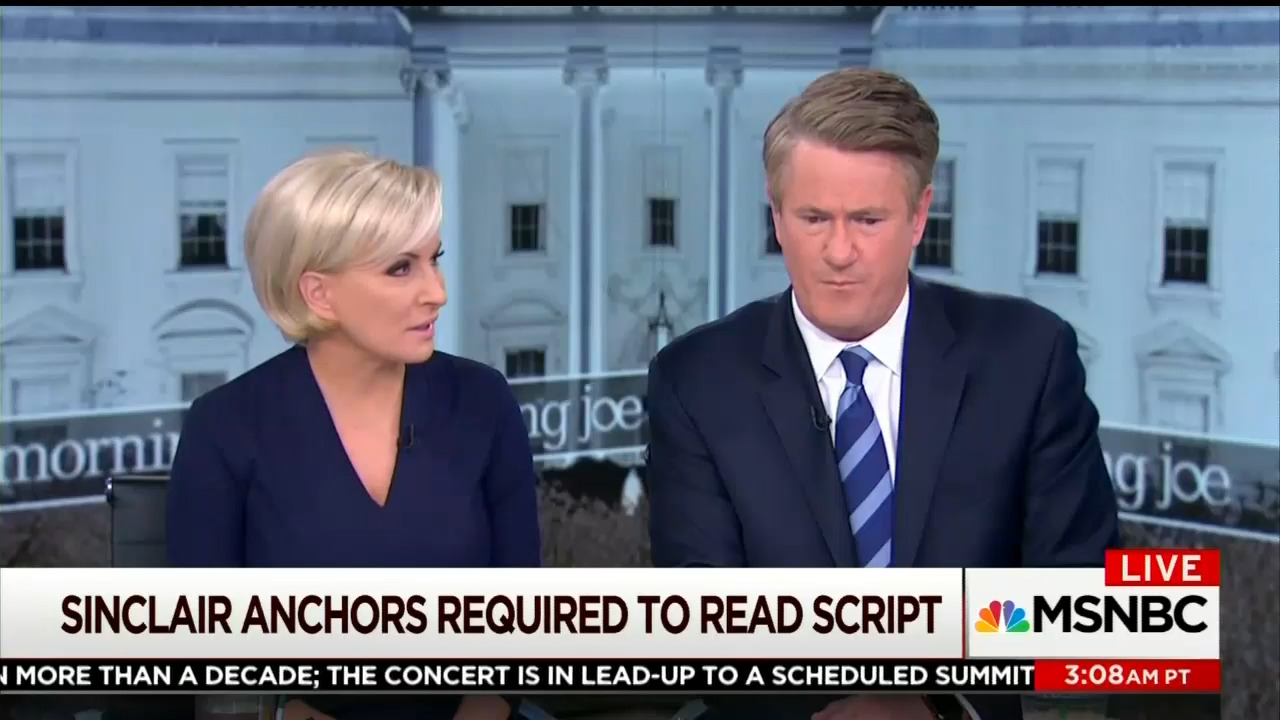 Speaking of Morning Joe, co-hosts and lovers Joe Scarborough and Mika Brzezinski were visibly shaken by this harmless Sinclair ad. Scarborough ripped it as “a propaganda clip attacking news agencies” that’s “straight from the pen of somebody who’s a Trump acolyte” and “is really, really chilling.”

“[D]oes that not remind you so much of what we as Americans and what those of us in the free world mocked from Soviet block countries during 50, 45 years of the Cold War...They're stooges that just repeat the lines that are fed to them,” Scarborough wondered to Jon Meacham.

“It's kind of beyond chilling, right? It's state media, essentially. It's one of the things that we've always, as a country, prided ourselves on a free and raucous press,” Meacham stated.

Brzezinski hyperbolically bemoaned that this was not only “incredible and chilling...and heart-breaking” but “[t]his is a really embarrassing moment for journalism.”

Later in the day, Washington Post columnist Jonathan Capehart argued that this single promo is degrading to American democracy and MSNBC analyst Victoria DeFrancesco fretted that Trump and Sinclair’s promo was “bothersome” and akin to a country like Venezuela under Hugo Chavez.

“It’s also a clarion call. It’s more than a dog whistle, it’s more like setting off a cannonball, saying for those who look to President Trump for leadership rhetorically, for those who share his concern about fake news, for those that want to blast the media for the coverage, you will find a safe home in us,” NPR’s David Folkenflik proclaimed on MTP Daily. 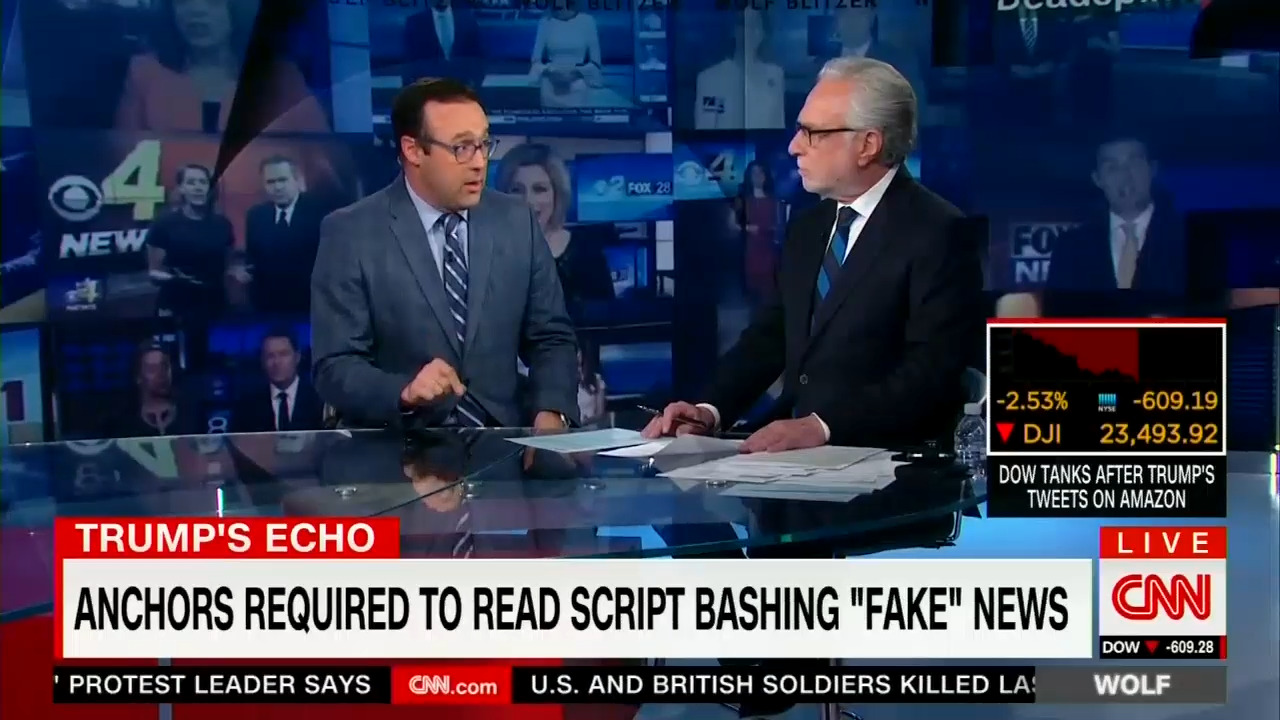 Despite having less airtime, CNN was no less vicious with every program citing the one-minute Sinclair promo except Inside Politics.

On New Day, former Obama administration official and guest co-host Jim Sciutto argued that “it’s like something out of the movie 1984,” while John Avlon complained to Brian Stelter that “[i]t’s allegedly defending the virtues of objective news, nonpartisan news, attacking fake news, but it is coming itself from a partisan perspective.”

“I spent time in China which has an actual state media and it rings very familiar. This is the way authoritarian states operate. It does. You push and pressure across and they have a tremendous look for them,” Sciutto added.

During the 1:00 p.m. Eastern hour, Chris Cillizza told Wolf Blitzer that it’s not only “a little bit concerning” and “insidious,” but it’s set “a dangerous precedent” because “it echoes what we know is one of Donald Trump’s hobby horses, which is, ‘the news is fake and people — there’s too much falsity out there.’”

“I actually don't find propaganda as funny as the President of the United States seems to do in that tweet because I think if you really believe in the First Amendment and free press and the role of the watchdog....you actually have to allow them to have and exercise their own rights...I think this was a rejection of what the principles are for journalism,” legal analyst Laura Coates opined on The Situation Room. 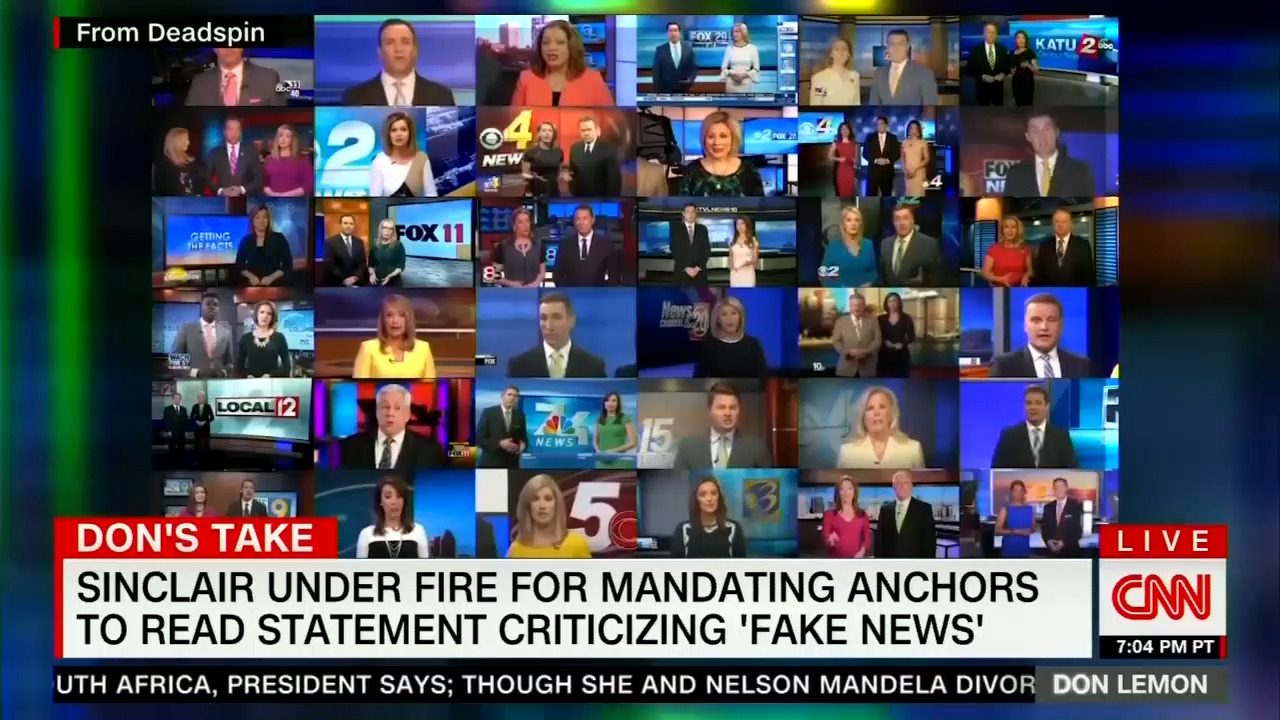 It is not the role of news anchors and journalists to report stories about you and your administration with a glowing beam. It is our job to speak truth to power. Facts First. Not ideology first, not ideology at all. We're not supposed to tell the viewer what to think nor should management.

To hat-tip Ben Shapiro, he wrote this on Monday regarding CNN: “If this same message were read by Brian Stelter on CNN, word for word, nobody would have any problem with it.” If that happened, it’d be praised as triumphantly boasting of CNN’s (false) pursuit of the truth.