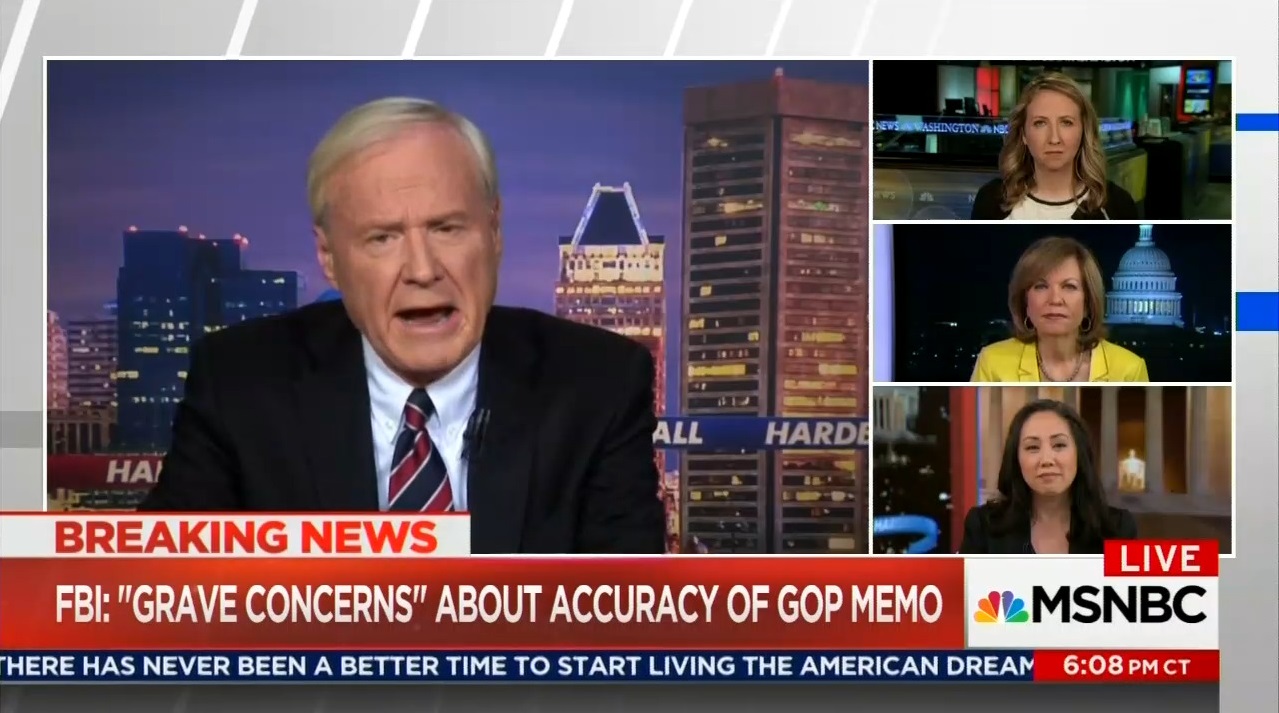 With Tuesday’s State of the Union well-received by the public (and not the liberal media), it was time to move on and back to spreading fake news, attacking Christians, and hurling around tired insults. Luckily for the Resistance, Wednesday’s Hardball accomplished just that.

The Federalist’s Mollie Hemingway exposed this fake news originally pushed by The Daily Beast that Republican Congressman Devin Nunes (Calif.) had falsely denied colluding with the White House to craft the intelligence memo, but MSNBC’s Hardball fit right in with The Daily Beast as they too pushed this falsehood.

NBCNews.com writer Julia Ainsley bemoaned that Nunes “is trying to undermine” Special Counsel Robert Mueller and “unfortunately, what we've heard is that Nunes and possibly other members of Congress have been talking to the White House as they've drafted this memo which further raises questions about its accuracy and its bias.”

Matthews and Page pushed this claim too. Matthews told former Ted Kennedy staffer Mieke Eoyang that “I get the feeling he's getting advice, supervision, direction from the White House” and that he concocted the memo from “something down at the White House.”

“[I]t's something I've never seen before in Washington which is the Justice Department and FBI which are, after all, part of the Trump administration are at odds with the White House...and we've got the White House in a coalition or working with collaborating with the House Intelligence Committee,” Page added.

Matthews has quite a reputation of engaging in juvenile behavior and so one of his top insults is to label someone Joseph McCarthy or guilty of engaging in McCarthyism.

Speaking to Page, Matthews screeched about Nunes and the FBI memo being similar to the Army-McCarthy hearings with Mueller “prosecuting the President” and “the counter-effort here being run by Nunes apparently with the supervision of the White House.”

He then continued later to Ainsley:

It seems to me — not everything matches history, but this use of a document, this making a big deal about this memo is very much McCarthy tactic. It’s — I have in my hand a list here, I've got a document. This use of a document to make it sound like they know anything more than the argument they've made. They simply have a bunch of staff people tasked with coming out to attack the whole Mueller investigation and they do did so in four pages and now it's called a memo, a document, like it's the Declaration of Independence or something.

The liberal columnist Michelle Goldberg stooped to a new low by attacking the emotional recognition of North Korean defector Ji Seong-ho at Tuesday’s State of the Union due to his Christian faith and supposedly being used as a prop to advocate for war with North Korea.

Goldberg begrudgingly footnoted that “the North Korea regime certainly is cruel and depraved, but this sort of thing parading the cruelty and torture inflicted by the regime it's something similar to what you saw both before the first Gulf War and then before the invasion of Iraq to kind of get people to feel emotionally invested.”

Howard Fineman concurred that this echoes past moves by Republican presidents with Trump “want[ing] to the try to isolate the north and scare the north if he possibly can and beat the drums as did he last night.”

On the back end of the show, Matthews spoke to AFL-CIO union boss Richard Trumka and lobbed a softball fretting over whether Trump has made “it more dangerous to work in America” due to slashing government regulations.

Trumka said “[t]here’s no question” it’s more dangerous because we already “lose 150 workers every single day in this country to occupational injuries and disease” but will only go up because of the administration choosing to shrink the bureaucratic state.

“[A]s a result, more workers are going to die on the job, not go home and be able to realize their family,” the far-left big whig concluded.