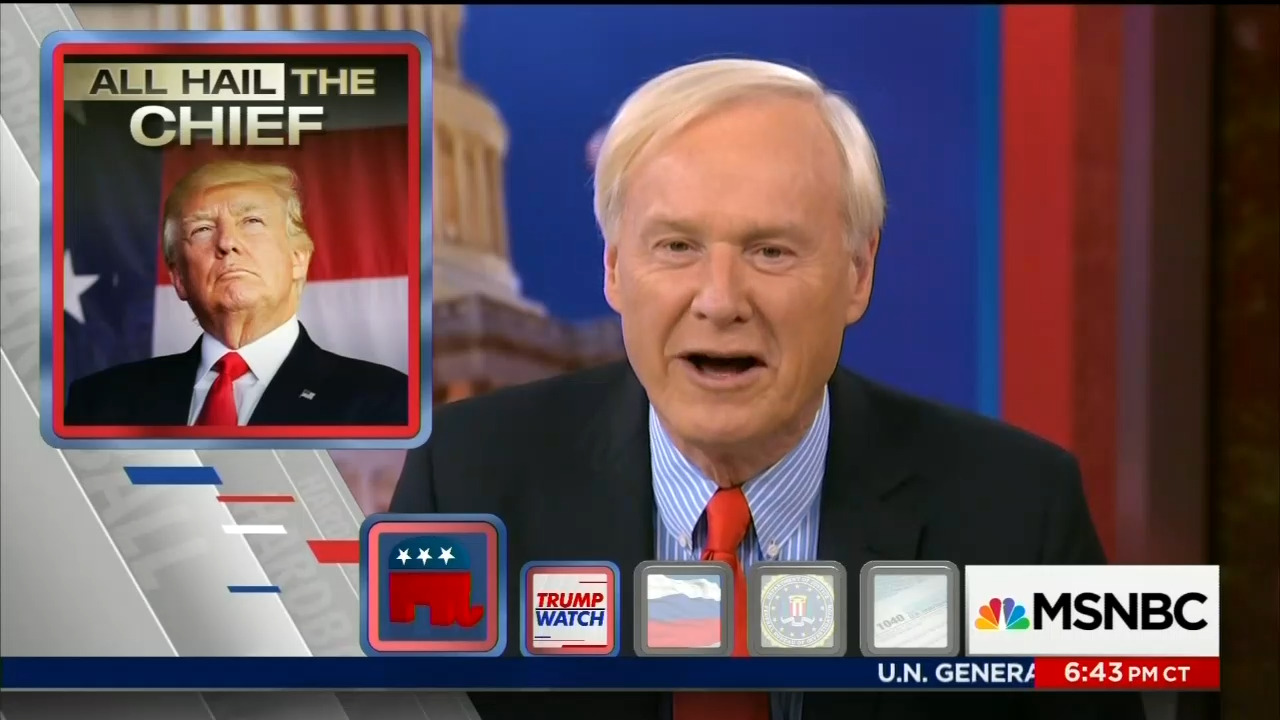 Yes, we’ve made it to the end of another year and those of us tasked with watching MSNBC’s Hardball with Chris Matthews are still sane.

With the departure of Matthews’s beloved Barack Obama from the White House, 2017 was bound to be a tough year for him with the arrival of Donald Trump’s presidency. Matthews didn’t disappoint in providing plenty of content and head-scratching moments to read here at NewsBusters.

Whether it was bidding farewell to the “physically stirring” Barack Obama, suggesting Trump murder son-in-law Jared Kushner like Italy’s Benito Mussolini did, or comparing Russian fake news trolls to the 9/11 hijackers, it was tough narrowing down the list to ten.

On January 4 and January 5, Matthews was despondent to the point that he worried Trump had rendered the liberal media so untrustworthy that swaths of people would stop believing the movie theater times printed in newspapers.

Here’s his mini-tangent from the January 5 show:

The thing is that I do believe that he’s convincing with 34 — 30 to 40 percent of the country that voted for him and they have to believe it because they’re invested in him. He’s their hope, so when the moon is made of blue cheese, are they going to believe it? If he’s going to say the movie starts at 8:30 when it starts at 7:00, they are going to be mad at him if people still go to the movies[.]

The MSNBC pundit ensured that viewers were constantly reminded of his love for Obama and especially in Obama’s last days as President. On January 10, Matthews told guests Eugene Robinson and Megan Murphy that it was so “emotionally and physically stirring” to see Obama elected.

Later in the show, he looked at the camera and thanked Obama upon hearing a clip of him from the 2008 campaign “for having the courage to stand up for this country.”

Less than 24 hour before Donald Trump was inaugurated, Matthews engaged in some fearmongering for the ages, suggesting that Trump was so mentally unstable that he could use the nuclear launch codes (thus deploying nuclear warheads) on January 20.

Unless this is some parallel universe, it’s safe to say that these claims proved to be 100 percent false.

Matthews was one of many MSNBC talking heads who slogged their way through Trump’s presidential inauguration by making one asinine statement after another. The Hardball host’s contributions included the assertion that President Trump’s inaugural address was “Hitlerian” with its “America First” mantra at its core.

“Of course, nothing about human rights, nothing about gender rights and other things you'd hear from a Democrat but I thought it was a strong statement to the people who voted for him,” he added.

On at least three occasions in 2017, Matthews compared Trump to World War II-era Italian dictator Benito Mussolini and thus son-in-law/senior adviser Jared Kushner should watch his back or else Trump could murder him.

Moments after the President’s inaugural address, Matthews provided a suggestion to Rachel Maddow about how Trump could solve questions about nepotism:

MATTHEWS: [B]ut Mussolini had a great solution to that. He had him executed. So, it’s —

MATTHEWS: So, if I were Jared, I’d be a little careful.

Four days later, Matthews did it again, but this time it was to the approval of Mother Jones D.C. bureau chief David Corn.

MATTHEWS: So the son-in-law — you know, one good thing Mussolini did was execute his son-in-law. I mean, I’m talking about Ciano

MATTHEWS: That was an extreme measure. But this was — this is a strange situation.

In 2017, two disturbing claims were made by Matthews when he insisted on an umpteen number of occasions that the Trump children are the American version of Saddam Hussein’s sons Uday and Qusay while the whole family are modern day Romanovs.

Whether it was January, April, April again, June, or October, the comparisons were being spewed on MSNBC airwaves with zero context about the misdeeds committed by the Hussein children and how off-base that is to Trump’s adult children Eric, Don Jr., and Ivanka.

On one occasion, Matthews even joked about how “we know what happened to the Romanovs” as seeming to allude to their brutal murders at the hands of the Bolsheviks. Matthews suffered zero punishment for this outrageous comparison.

The July 20 Hardball featured Matthews screeching about how much President Trump enjoyed being witness to a parade of American and French soldiers while in Paris on Bastile Day.

Instead of moving on, Matthews rambled about how Trump “loves parades” in the same way that North Korean ruler Kim Jong-un and infamous Uganda dictator Idi Amin did too.

Yes, that caption is correct. Rewinding to September 28, Matthews was schmoozing with liberal media BFF and Democratic Congressman Adam Schiff (Calif.) when the former distastefully argued that Russian-backed internet trolls in 2016 were the al-Qaeda terrorists who hijacked three four airliners on September 11, 2001.

You know, when they came here to bomb us — hit the World Trade Center back in 2001, do you notice how they came here for flying lessons? And Americans gave them flying lessons down in Florida and the guy said I thought they were from Germany. Come on, a little sophistication about who is coming to get the bombing lessons for controlling an airplane to fly it into the World Trade Centers. And now these guys just casually take Twitter. They exploit the hell out of it. It's free. They exploit Facebook. They pay a few bucks and these numb nuts that give them this authority — they treat these platforms like they are open to anybody.

This Matthews moment came on October 4 and a few days following the Las Vegas massacre when the left predictably pushed any and all gun control measures (most of which would have done nothing to stop the attack).

Matthews was among friendly company in USA Today’s Heidi Przybyla and Washington Post columnist Eugene Robinson, so he felt no pushback when he linked Second Amendment advocates to North Vietnamese fighters that stymied the efforts of American troops during the Vietnam War:

You know, we couldn’t win in Vietnam because we were going the stay — they were going to stay there, and we’re going to come home....The people who are for gun control get interested in something for a while, but the gun owners stay with it. They never leave it. They’re the home team, and they’re never going to let people touch their guns.

Matthews’s disastrous 2017 ended with a bang thanks to the passage of the Tax Cuts and Jobs Act into law and it left him enraged just days before Christmas.

Going first to the December 20 show, Matthews bemoaned “Trumpkins” holding a “song fest” at the White House equal to “a druid celebration of the winter solstice.” He also noted that Republicans were there “do[ing] their hosannas” and bowing before “Sun King” Donald Trump.

December 21 didn’t see any cooling of the rhetoric on Matthews’s part as he continued to condemn the supposed act of thievery that robbed the poor to feed the rich.

In a tease for a later segment that invoked Ethiopian strongman Haile Selassie, Matthews trashed the Republican celebration as “look[ing] like a North Korean parade.”