On Wednesday, The New York Times editorial board and Twitter account arguably crossed a line into becoming a grassroots advocacy group, encouraging and providing both readers and Twitter followers with phone numbers to call select Republican Senators in order to defeat the Republican tax plan.

This decision reeks of hypocrisy, considering the newspaper’s fervent opposition to the Citizens United case, which my colleague Clay Waters has written about here and here. Newspaper editorial boards state their support or opposition for legislation or policies on a daily basis, but launching a campaign to call U.S. Senators? That’s a far different matter.

After looking at their new Twitter bio, one can’t help but wonder if they’ve morphed from a for-profit corporation to a 501(c)4 group or political party:

In addition, the far-left editorial board started a hashtag campaign entitled #TheTaxBillHurts and asked for respondents to let them know how they “will...be hurt by it.” They also uncorked one snarky tweet after another directed at Republican Senator, President Trump, and Vice President Mike Pence. Hate to break to The Times, but smugness doesn’t often win converts.

The lobbying effort started with a 797-word editorial in the print edition, featuring a graphic of a husband, wife, two children, and dog about to be crushed (and presumably murdered) by a giant elephant foot, symbolizing the Republican Party.

The piece read like a Bernie Sanders screed, lambasting the GOP’s “enormously unpopular tax bill, which lavishes benefits on corporations and wealthy families, more generous to real estate tycoons and hedge fund billionaires to win over a couple of lawmakers who say the legislation doesn’t do enough for small businesses.”

Forgotten in this deal-making are the millions of poor and middle-class families whose tax and health insurance premiums would rise under the Senate bill....All told, half of all taxpayers would pay more by that year and two-thirds of people in the middle 20 percent of the income distribution would pay more, according to the Urban-Brookings Tax Policy Center.

The bill would also repeal the Affordable Care Act’s mandate that most Americans have health insurance or pay a penalty. As a result, up to 13 million could lose coverage, and premiums would rise 10 percent a year for the next 10 years, the C.B.O. says.

Republican senators have a choice. They can follow the will of their donors and vote to take money from the middle class and give it to the wealthiest people in the world. Or they can vote no, to protect the public and the financial health of the government. There’s no compromise on that.

Throughout the piece, it referenced nine Republican Senators, but The Times later went further, tweeting this with a link to finding your Senator and the D.C. office numbers for seven of them: “Now is the time to contact senators, if you haven’t done so already, about this tax cut plan.”

Out of left field, they linked the tax plan to the President’s retweets of alleged crimes by Muslims: 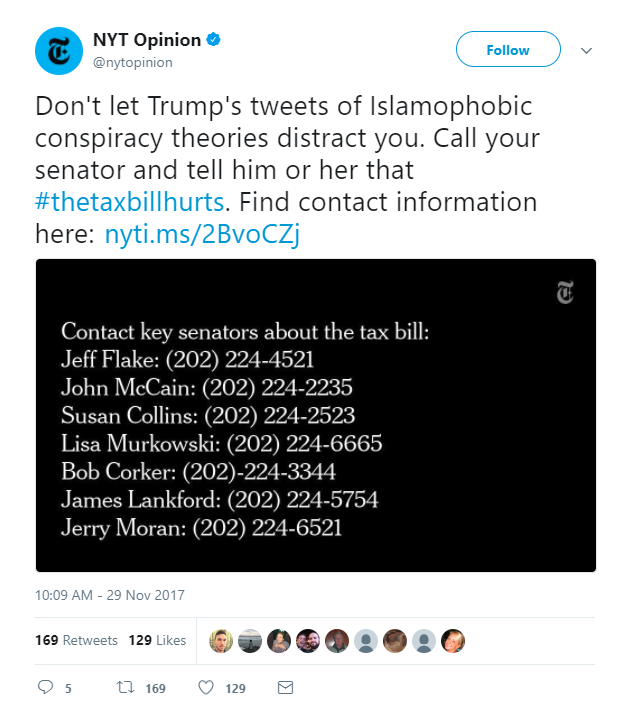 From there, they spaced out tweets for the seven senators referenced in the first tweet of phone numbers: 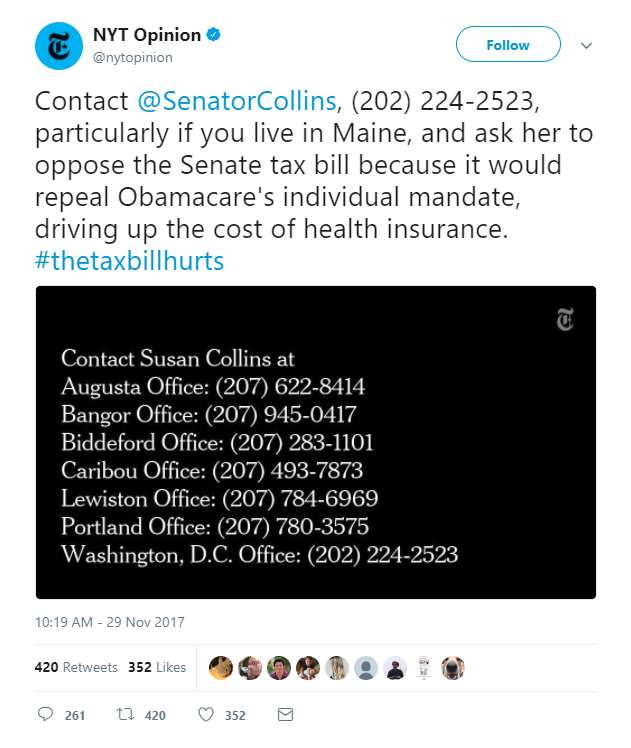 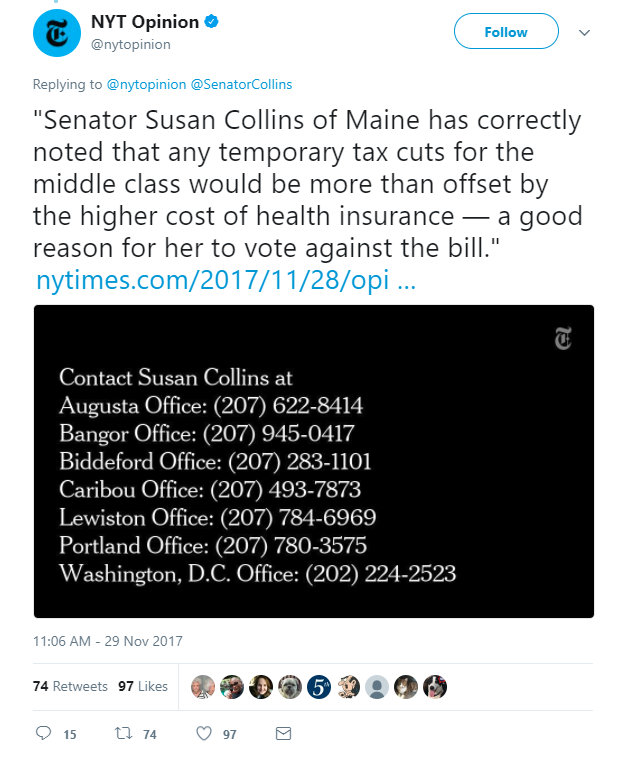 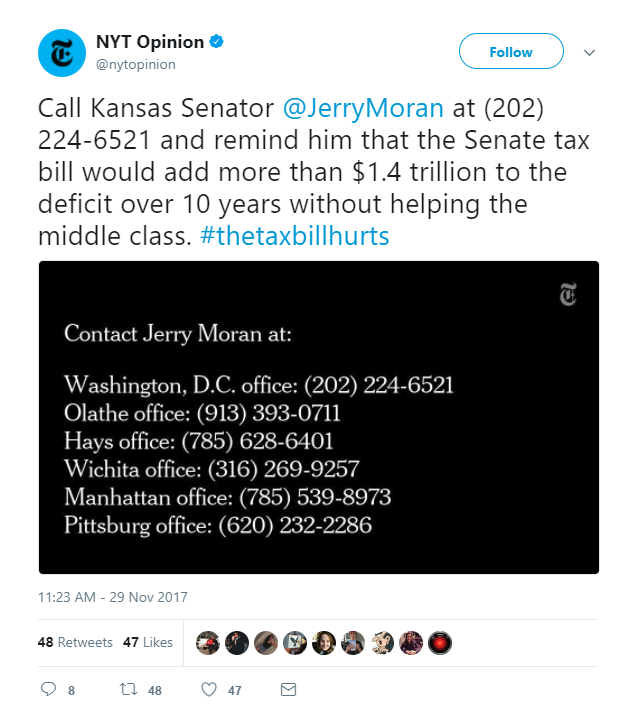 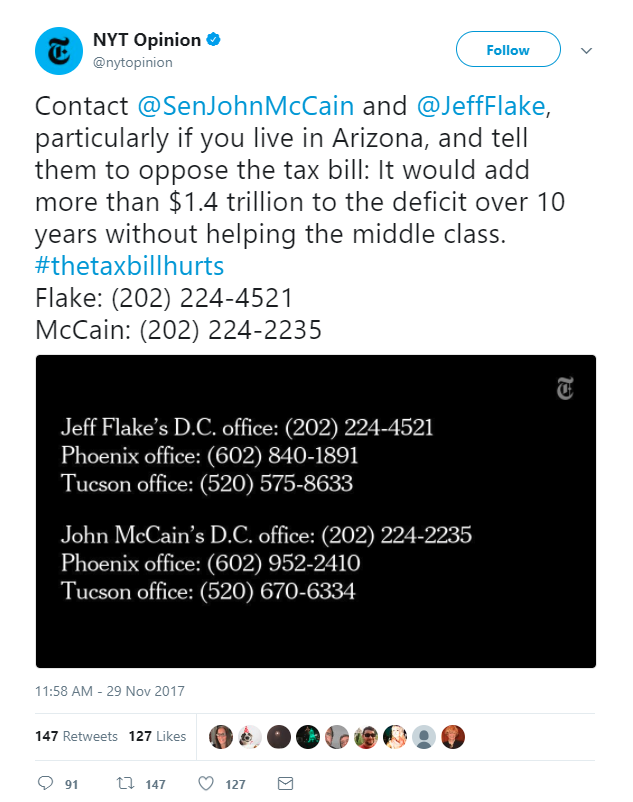 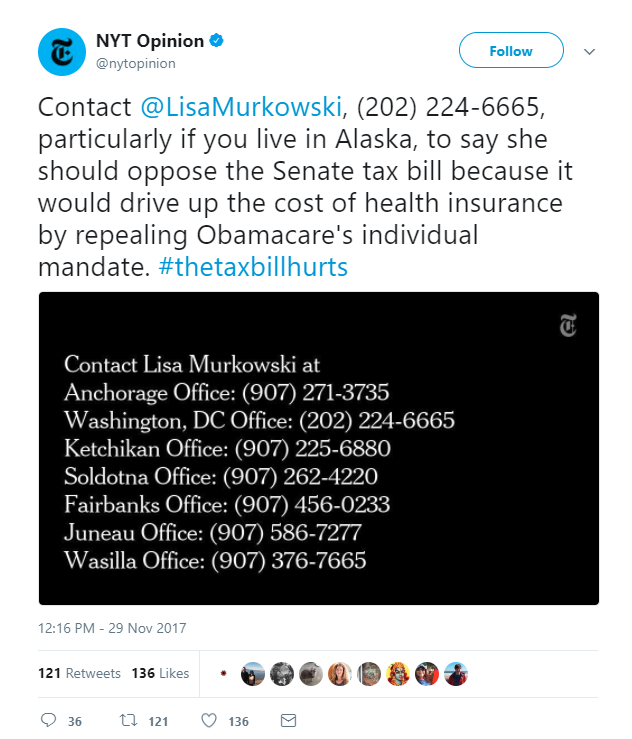 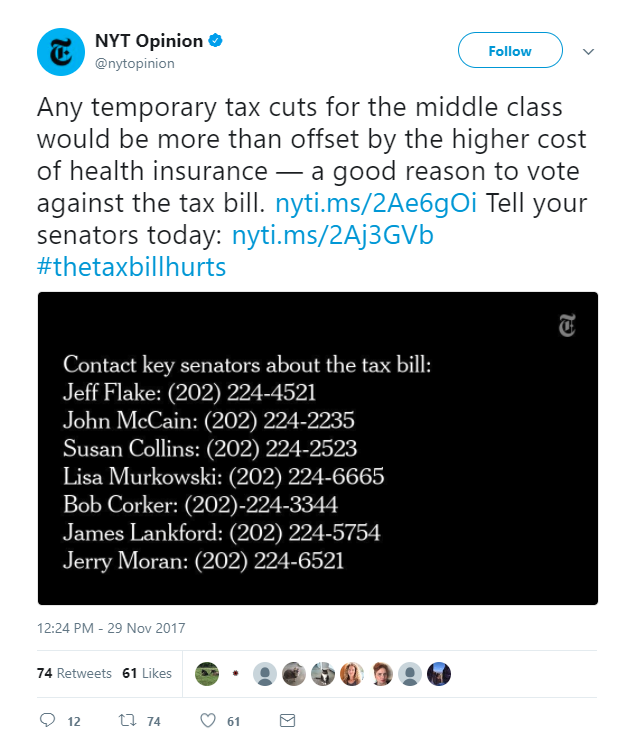 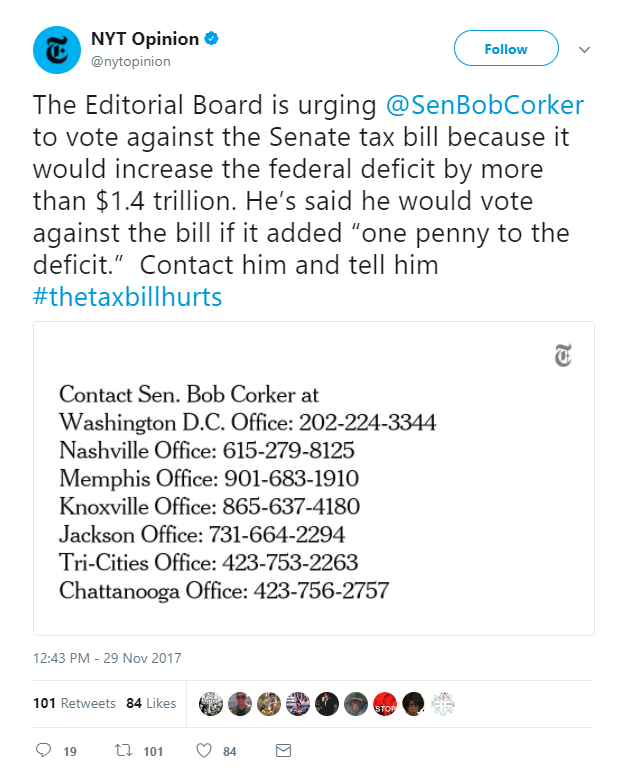 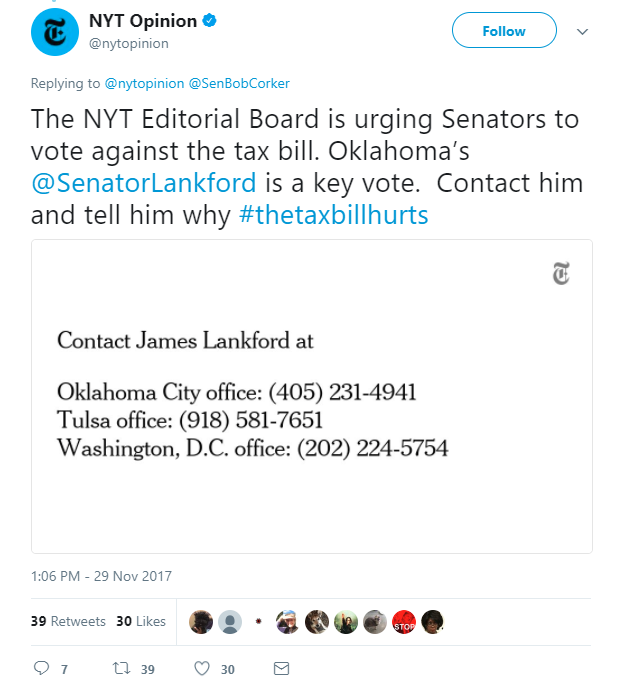 The newspaper seemed to acknowledge its pivot to advocacy, tweeting just before 2:00 p.m. Eastern: “Thank you for listening to the Editorial Board on why #thetaxbillhurts, and alerting the Senate to your concerns. We're now back to regular programming here, with our mix of op-eds, columns, videos and more.”