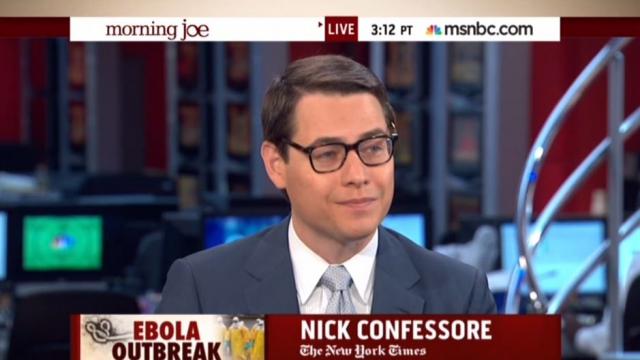 The New York Times is still bitter over the Supreme Court's 2010 Citizens United decision, which allowed businesses and individuals to give unlimited sums of money to support independent campaigns on behalf of favorite candidates. Considered a free speech victory for conservatives, Citizens is a horror story for liberal activists and the Times, a free-speech organization that wants to regulate the political speech of other citizens.

Wednesday's New York Times story by Nicholas Confessore and poll reporter Megan Thee-Brenan played up some thin polling data under the trumpeting headline "Poll Shows Americans Favor an Overhaul of Campaign Financing." A comprehensive deck of graphical polling data was included so the story filled out just over half of A18. The text box read: "Deep support for new measures, but little confidence in them."

Meanwhile, the positive polling of conservative causes opposed by the Times -- such as voter identification laws to combat vote fraud -- goes conveniently unmentioned by the paper.

The tone of the report was liberal and moralistic, with "the regime of untrammeled money" resulting in citizens (all the ones quoted by the Times supported more regulation) feeling "profound alienation from their own government."

Americans of both parties fundamentally reject the regime of untrammeled money in elections made possible by the Supreme Court’s Citizens United ruling and other court decisions and now favor a sweeping overhaul of how political campaigns are financed, according to a New York Times/CBS News poll.

The findings reveal deep support among Republicans and Democrats alike for new measures to restrict the influence of wealthy givers, including limiting the amount of money that can be spent by “super PACs” and forcing more public disclosure on organizations now permitted to intervene in elections without disclosing the names of their donors.

And by a significant margin, they reject the argument that underpins close to four decades of Supreme Court jurisprudence on campaign finance: that political money is a form of speech protected by the First Amendment. Even self-identified Republicans are evenly split on the question.

Only one problem: Constitutional rights aren't up for a vote.

The poll provides one of the broadest and most detailed surveys of Americans’ attitudes toward the role of money in politics since the Citizens United decision five years ago. And the responses suggest a growing divide between the nation and its highest court on constitutional questions that have moved to the heart of the American system, as the advent of super PACs and the abandonment of public financing by both parties in presidential elections have enabled wealthy donors, corporations and unions to play a greater role in political fund-raising.

In recent years, the Supreme Court’s conservative majority has steadily chipped away at restrictions on political donations while narrowing the constitutional definition of corruption. In a series of decisions, the court has rejected the notion that the access and influence afforded big donors can justify further restrictions on campaign money, while dismissing concerns raised by the court’s liberal wing that unrestricted political money skews policy-making in favor of the wealthy.

The reporters put the onus on Republican politicians:

Republicans in the poll were almost as likely as Democrats to favor further restrictions on campaign donations, even as some prominent Republicans call for legislation to eliminate existing caps on contributions.

Just a single line, paragraph 14 out of 23, showed that raw figures aside, the American people care very little about the campaign finance issue, compared to jobs and the economy. It's certainly not high on their list of priorities:

More than half of those surveyed said they were pessimistic that campaign finance rules would be improved. (Republicans and independents expressed more pessimism, while Democrats were evenly divided.) Over half of respondents said that the current rules equally benefit the Democratic and Republican Parties.

And virtually no one in the poll ranked campaign financing as the most important issue facing the country.

The Times, a journalist enterprise which depends on the First Amendment for its very existence, has previously showed disturbing ambivalence toward the free speech rights of opponents, in matters both foreign and domestic.