Joy Reid Spends Sunday Making a Fool of Herself on Twitter, Spurting Off on Guns, Jesus, Liberalism

On Sunday, MSNBC’s AM Joy host Joy Reid decided that she would spend her day making one clueless, deranged, and false statement after another on issues ranging from the definition of classical liberalism to guns to the NRA to the Sutherland Springs church shooting to even the ministry of Jesus Christ.

Let’s take the first dumpster fire tweet, which was on what she defined as a “classical liberal”: 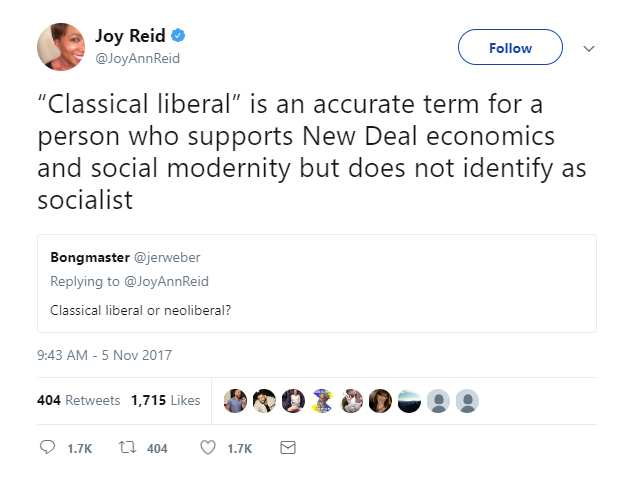 As friend and Townhall weekend editor Timmy Meads stated, that’s “essentially the polar opposite of what classical liberal means.”

There are a litany of outlets that provide correct definitions, but here’s one from the Mises Institute:

“Classical liberalism” is the term used to designate the ideology advocating private property, an unhampered market economy, the rule of law, constitutional guarantees of freedom of religion and of the press, and international peace based on free trade. Up until around 1900, this ideology was generally known simply as liberalism.

For anyone who is still confused, a video from the Institute for Human Studies group LearnLiberty.org laid this out in a great talk by Dr. Nigel Ashford.

As The Resurgent’s Josh Hammer tweeted, what would be a fun exercise is to “[f]ind me a single person in the country who would identify as both a ‘classical liberal’ and a supporter of ‘New Deal economics.’”

Alas, Reid was just getting started. Upon hearing of the monstrous attack on First Baptist Church in Sutherland Springs, Texas, Reid came out by doing — what else — and attack the National Rifle Association (NRA):

This comment came without knowing anything about the gunman, his criminal record, history, or anything else that would have been relevant to her scorching hot take. If she had waited, she would have learned that, due to his criminal past, he was prohibited from owning firearms and thus the weapons used in Sunday’s massacre were obtained illegally.

As a reminder, this is the same person who referred to this writer as ugly, hated Jesus, and “represent[ed] the foulest tradition” in a smear job for the ages, so that’s the type of tasteless person we’re dealing with here.

With that, she then turned her ire toward Christians and trashing anyone who offered their prayers in the aftermath that didn’t involve pleas for gun control. It only got worse as she took direct aim at Christ, flaunting her supposed knowledge of Christianity (which in of itself isn’t something Christians should be doing). Here’s a few of them: 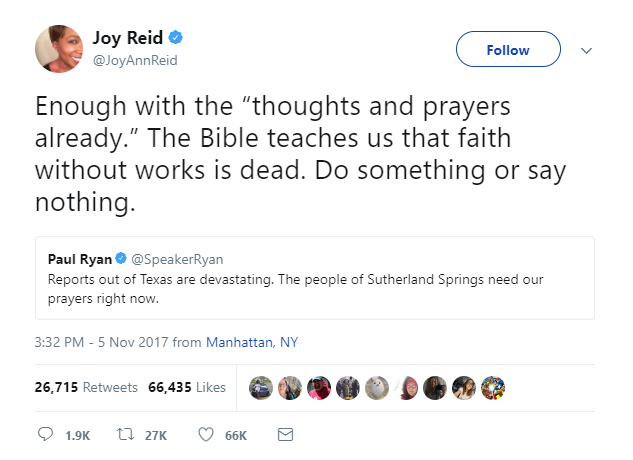 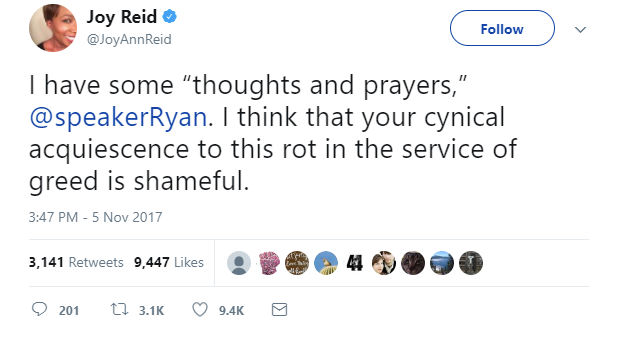 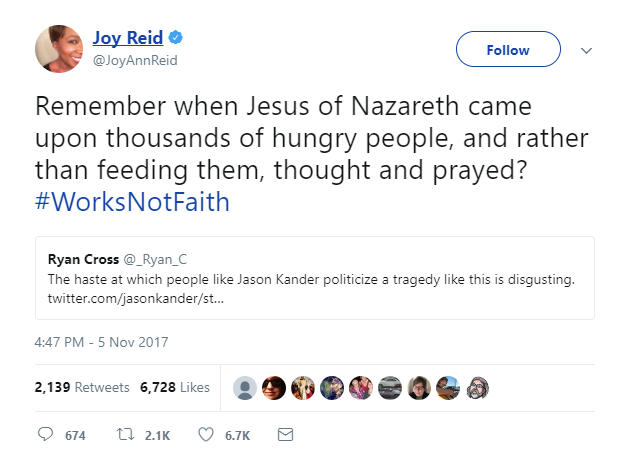 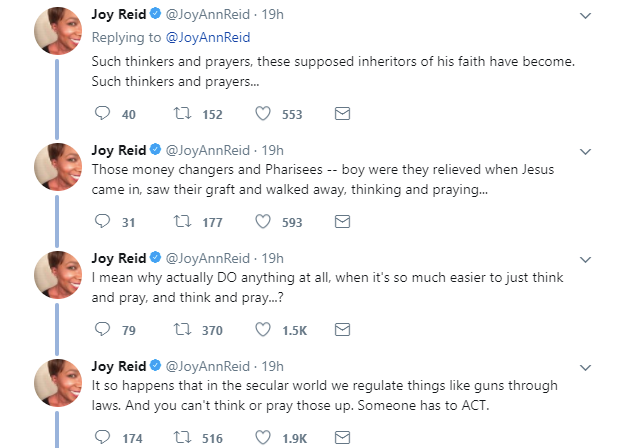 There’s just so much fake news and pure rage in these tweets it’s difficult to not lash out at Reid’s lowlife behavior.

As flagged by our friends at Twitchy, one of Reid’s Twitter critics quoted 1 Thessalonians 5:17 in which the Apostle Paul encouraged readers to “pray without ceasing.” 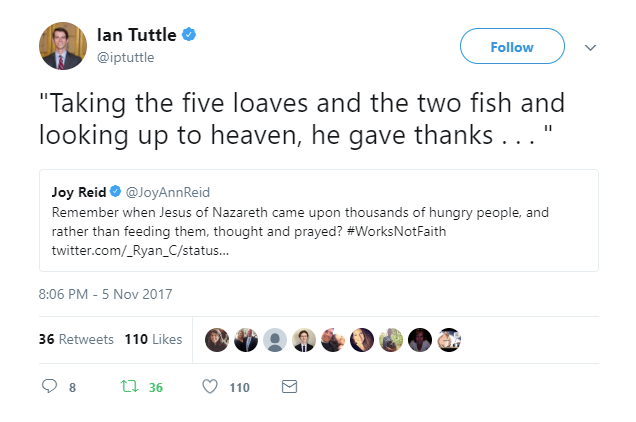 Without wading into the divide between Catholics and Protestants, all Christians agree in the importance of Christ as our Savior and that prayer is a central tenet of our faith.

Reid’s hardened heart reappeared again on Monday as she claimed to be a firm Christian woman who “grew up in the church” when she berated Ricochet’s Jon Gabriel and The Federalist’s Bre Payton and Sean Davis.

In that spat, she referred to Payton as “hun,” so mark that one away as something that would have caused a media uproar if someone said that to a liberal woman.