MSNBC’s AM Joy host Joy Reid went on unhinged Twitter tirade against none other than yours truly on Tuesday afternoon, decrying me as, among other things, an ugly person “represent[ing] the foulest tradition in American history” who hates not only Jesus but the poor too. 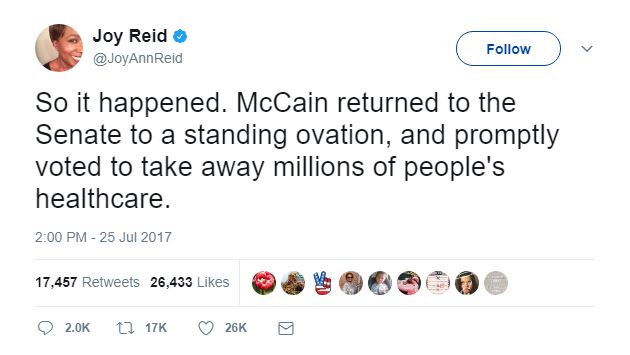 I followed with this quip: “Stop fearmongering with fake news. This love-now-hate for John McCain shows how nothing matters to you people.”

Little did I know, this was more than a trigger for Reid. She started off by taking issue with my tweet: “I find it hilarious that you -- well in your parlance ‘you people’ -- dare to talk about civility.”

Reid might have thought I was talking about African-Americans, but I was obviously referring to the media. As I noted in my last item about the reaction to McCain returning for the motion to proceed, the media have gone from loving McCain to despising him to loving him again last week to now trashing him.

As you’ll see below, basic human decency was lost in Reid’s responses, devolving into name-calling and making assumptions about me that I will each briefly address. Here’s her next tweet: 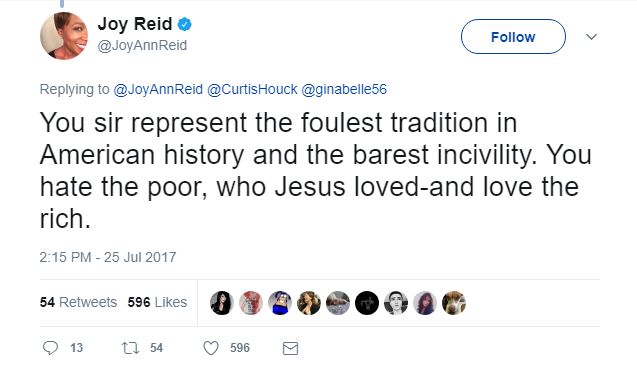 First of all, this one alone showed how little she knew about me. It’s downright offensive that she would suggest I belong to “the foulest tradition in American history and the barest incivility.”

My father was a Marine before becoming a teacher, recreation center executive, and now hospital security official while my mother helps to oversee my aunt’s small manufacturing business. I lived a middle class life where my parents sacrificed so much and taught me the values that made this country great.

Even when things didn’t go our way, I was shown how to hold fast to the belief that God has a plan for each and every one of us. Sometimes, it’s hard to do the right thing.

I’ve had plenty of friends from diverse backgrounds throughout the years. No matter what, I didn’t let my political beliefs get in the way of friendships.

Moving on, here’s her next two tweets: 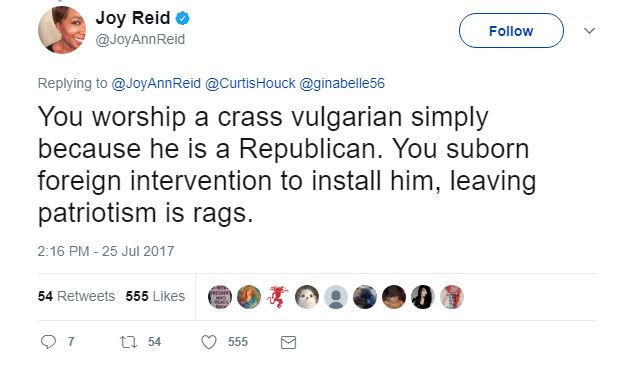 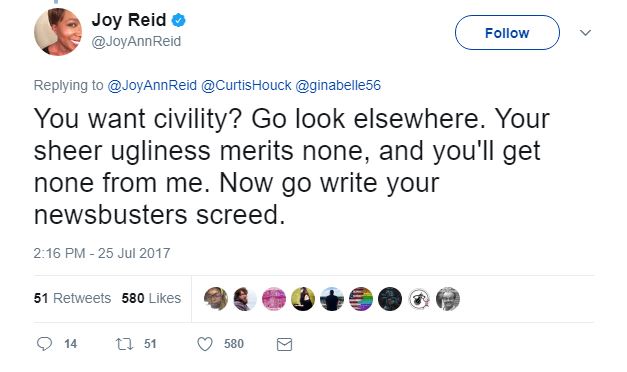 As far as my personal beliefs go, this is not the space for that. Reid also ranted in those two passages that I possessed a “sheer ugliness” that “merits none.” Yikes. I wouldn’t wish that on my worst enemies. Again, she exhibited a reckless disregard for my personal history.

Whether it’s my internships through college, working as the NewsBusters evening and Sunday analyst, or the ups and downs of my life, I truly love writing for you, the readers and people of the conservative movement.

Needless to say, Reid’s type of language is unbecoming anyone in American political discourse. Period.

She concluded by saying “get the hell out of my mentions,” but immediately continued tweeting at me: 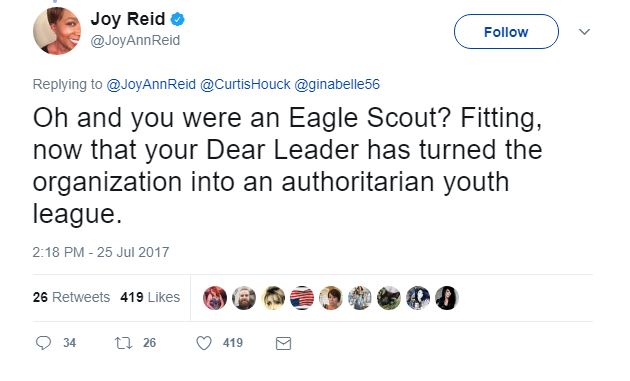 My colleague Tim Graham astutely mentioned earlier how the Boy Scouts were beaten and battered by the left and “the LGBT Pressure Bus” so that they would kowtow and promote nefarious lifestyles. So, it’s intriguing that the left is now concerned about upholding the Boy Scout Oath and Law.

I did respond with smaller quibbles, but here’s the uninterrupted tweetstorm I first sent out (with links to stories for emphasis):

Yikes. First of all, if I was so horrible, why are you still messaging me? You know nothing about me and my beliefs over the years. 2nd of all, whatever happened to praying for your enemies, as you and Rev. Barber denounced. You want to talk about loving Jesus? That's it, not wishing the worst on someone. Also believing in the abortion of innocent children, but that's for another debate. You showed your contempt for huge swaths of the American people by denouncing millions as "hillbillies" back in March. You allow guests like Jennifer Rubin to decry Trump cabinet picks as ignoramuses. NewsBusters uses no such language and doesn't accept it. You also said people are too dumb to understand Hillary's e-mails in August '16. YOU are supposed to be role model for people and you're doing anything but that. All the best to you.

Nevertheless, she expressed doubt that I prayed for my enemies, saying that she’d be “shocked you don’t choke on the word ‘love.’” I tweeted that I certainly have, as per Matthew 5:43-48. I also made clear that I find Barack Obama to be a good man who loves his family and I still prayed for him despite my vehement disagreements.

Alas, she countered with Jeremiah 22 to claim that conservatives like myself want to rob the poor of their health care, creating a fallacy that conservative policymakers a lot smarter and older than I am could debate.

Joy Reid can lob these insults and claims I don’t know Christ, but following Christ has been the center of my life, above any material possession or person. All that we have is because of God’s blessings and His Son’s sacrifice on the cross so that our sinful selves would have a chance at eternal life.

So, yes, I do pray. And I pray for my enemies. I don’t see how any of that is ugly or foul. But then again, call me old-fashioned.