The Washington Free Beacon’s Alex Griswold ripped The New York Times in a Tuesday afternoon Twitter thread for altering a headline of its exclusive President Trump interview from a sober one to a biased version that “editorializes more than a little” in an attempt to do the bidding of their besties in The Resistance.

Griswold began the thread by knocking a tweet from Huffington Post media hack Michael Calderone touting the paper for its “Improved NYT headline”: 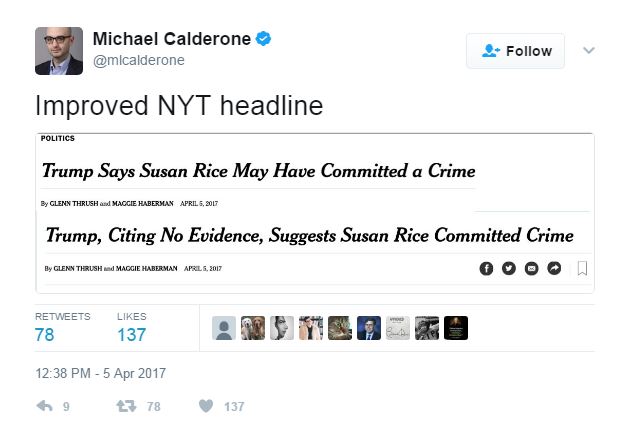 “I’ll be honest; I hate this trends,” Griswold commented before noting how the first one “was undeniably accurate: Trump accused Rice of breaking the law.”

Clearly, Griswold observed that “[t]he new headline editorializes more than a little” and while “[i]t may still be accurate, but it conveys disapproval absent from the original...and the headline changed” after their fellow liberal hacks on Twitter “complained that the (accurate) headline didn’t say what they wanted it to.”

He then broadened this issue to what many of you, the readers, have probably noticed in 2017, which is the blatant editorializing of the opposition party in the media against conservatives and the Trump administration.

Taking note of how, years ago, there weren’t any snarky hot takes in newspaper headlines and TV chyrons were nowhere to be seen years ago, he continued:

Well, tough. Until- oh, a year ago- there was no expectation that headlines fact-check politicians’ claims. Op-eds/opponents do that 4 u....The sudden demand that CNN chyrons and headlines immediately disclose falsehoods only came about when Trump came along. It's transparent.

The Free Beacon writer concluded by raising concerns from a media ethics standpoint for the profession going forward: “Leaving it in the hands of editors allows possibility of bias...I can’t shake the feeling it has more to do with signaling to reader base and self-righteous back-patting than any sort of new standard.”