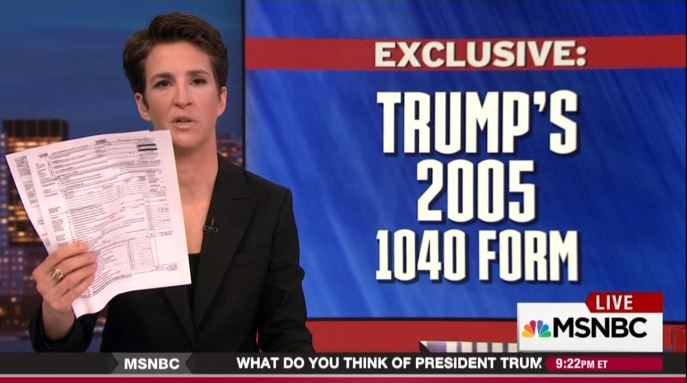 Wednesday afternoon, MSNBC’s Rachel Maddow gave an interview to the Associated Press defending her actions following her epic fail regarding the tease and reveal of President Trump’s 2005 tax returns by blaming viewers for overblowing the revelation.

Maddow spoke to the AP’s David Bauder (who, to be transparent, has frequently cited and quoted members of the MRC in the past) and, in Bauder’s summation, “says that if people felt let down by her story about President Donald Trump's 2005 tax document it's more because of the weight of expectation than anything she did.”

Bauder noted how a tweet from her account 90 minutes prior to her show “set off a social media frenzy” and thus “expectations were sky high.”

When a direct quote from Maddow arrived, she complained: 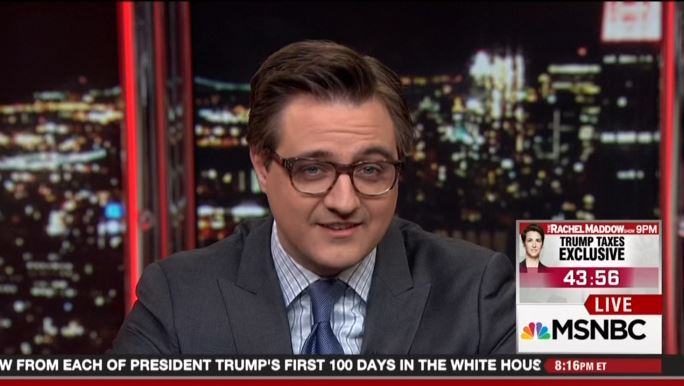 In an aside, it’s humorous that Maddow essentially passed the blame onto viewers. For the hour leading up to her eponymous MSNBC show, the network parked a countdown clock above the MSNBC logo during All In with Chris Hayes (see photo).

Such a distinction has been reserved for debates, town halls, and other special events. If that’s not trying to pump up the audience and tout its significance, I don’t know what is.

Back to the AP item, Bauder noted how Maddow quickly lost viewers and drew comparisons by more than a few people (including this writer) between Trump’s tax return and Geraldo Rivera’s ill-fated escapade to open Al Capone’s vault.

Maddow hilariously replied that her job “is to get the story right and put it into proper context, and explain the weight of it and why it is important” and, in this case, convince viewers why it was “a super interesting first window into his finances” and thus “is a legitimate scandal.”

Bauder concluded with more from Maddow, who admitted that she doesn’t care that she’s faced criticism:

Maddow said she didn't feel that the White House had undercut her story by releasing the tax information early, noting that it was important to get confirmation that the story was right.

“I don't really care,” Maddow said. “It is funny to me that a president would spend this much energy and political capital to keep secret his finances and his taxes specifically and simultaneously would want to brag about how much money he made. If that's really what he wants the story to be, he can release all of his taxes and we can all glory in his immense wealth.”