Warning: Readers may find some of the language used by the alleged suspects of violent crime disturbing.

On the Wednesday network evening newscasts, ABC’s World News Tonight and NBC Nightly News failed to inform their viewers of an incredibly disturbing alleged beating in Chicago of a developmentally challenged white man by four African-American suspects that was streamed live on Facebook.

The torturing session saw the man (who previously had been reported missing) being bound with tape and bloodied from cuts to his scalp as the suspects laughed at him and shouted “fuck Trump” and “fuck white people.”

With ABC and NBC choosing to keep their audiences in the dark on this (at least until Thursday morning), the CBS Evening News was the lone network left to cover it. However, fill-in anchor Josh Elliott could only muster a 27-second news brief that only vaguely described the situation.

“Well, Chicago, which just had one of its most violent years ever, was the scene of another horrifying attack this week. A young man, described as law enforcement sources as developmentally challenged, was beaten, kicked, and tormented for half an hour,” Elliott explained.

He concluded by alluding to the assault being broadcasted on Facebook and how the victim “had been reported missing from his home in the suburbs” but “is now in the hospital and four suspects are in custody.”

Here’s a more detailed summary of what we know so far from Chicago’s Fox 32:

On Tuesday afternoon, police officers spotted the victim walking on a street on the West Side wearing shorts, Guglielmi said. Because it was unusual to see a man in shorts in the cold weather, the officers stopped to talk to the man, who appeared disoriented, and he was taken to a hospital to be treated for his injuries.

At a press conference late Wednesday night, Chicago police superintendent Eddie Johnson told reporters that the video “put on display the brazenness of the offenders, who assaulted the victim and then broadcast it for the entire world to see.”

Johnson warned that “[i]f you commit an act of violence in the city of Chicago, you will feel the full weight of the Chicago Police Department.”

Cable news coverage of the incident on Wednesday night ranged across a number of CNN and Fox News Channel (FNC) shows from Anderson Cooper 360 to The Kelly File. On the latter program, even liberal panelist Richard Fowler agreed with the notion that what transpired could warrant hate crime charges.

Whether ABC’s Good Morning America and NBC’s Today want to cover this story on Thursday, the ball is in their court.

Here’s the transcript of the news brief from January 4's CBS Evening News: 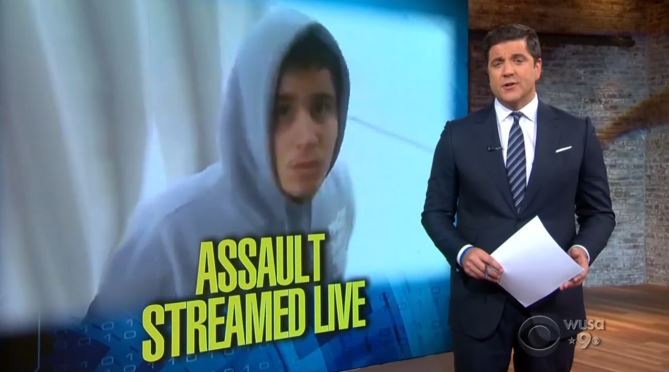 JOSH ELLIOTT: Well, Chicago, which just had one of its most violent years ever, was the scene of another horrifying attack this week. A young man, described as law enforcement sources as developmentally challenged, was beaten, kicked, and tormented for half an hour. Video of the assault streamed live on Facebook yesterday. The victim had been reported missing from his home in the suburbs. He is now in the hospital and four suspects are in custody.