Between Monday night and late Tuesday, various media outlets made the bizarre comparison between Melania Trump’s CNN interview defending husband Donald Trump against allegations of sexual assault to the infamous sit down then-First Lady Hillary Clinton gave to NBC’s Today in 1998 where she denounced accusations against President Bill Clinton as part of a “vast right-wing conspiracy.”

After a number of references on ABC, CNN, and MSNBC, the Tuesday edition of MSNBC’s Hardball dedicated portions of a segment to actually airing clips of the two interviews side-by-side with host Chris Matthews expressing his approval with the link.

“You know, I think that was a good piece of work there by putting those two together because the defenses are very similar,” Matthews opined to MSNBC/NBC correspondent Kasie Hunt who agreed that “[t]hey are, quite frankly.”

Prior to Matthews offering his comments, the clips aired after he vaguely ruled that “Mrs. Trump's defense of her husband sounds very similar many think to another political spouse whose husband faced accusations about his private behavior.”

The montage went on for nearly a minute and with this all in mind, it raises the question of if the media were so quick to gush over what Clinton told Today co-host Matt Lauer both then and in the years since, should we expect them to do the same for Mrs. Trump in 2016?

Thanks to a special report by my colleague Rich Noyes (part eight with links to one through seven here), he noted that nine months after Clinton denounced those raising concerns about her husband, then-CNBC host Diane Dimond parroted Clinton’s defense on October 23, 1998:

So why did it last for four years and cost $40 million? A look at the men and the money behind Ken Starr’s Whitewater investigation indicates that Hillary Clinton may have been right when she said there was a right-wing conspiracy to bring down the President.

Current CNN senior legal analyst Jeffrey Toobin belonged to ABC back in 2000 when he released a book entitled A Vast Conspiracy: The Real Story of the Sex Scandal that Nearly Brought Down a President and was promoting it on Don Imus’s program but also happily spinning for Hillary.

“I think she was more right than wrong....And if you look at how I think the legal system was manipulated by Clinton’s enemies, you know, practically from day one of his presidency, yes, I think it’s fair to say there was a conspiracy to try to force Clinton out of office, but one in which the President, you know, gave his enemies tremendous ammunition,” bemoaned Toobin.

Even 18 years later, Washington Post reporter Karen Tumulty relied on such a mantra to write a September 4, 2016 print story to shield Clinton from legitimate concerns of her not being entirely transparent with the American people.

Taking this all into account, if they want to link two interviews but demean and discredit Melania as Slate’s Michelle Goldberg did with an eye-rolling statement on MSNBC’s All In on Tuesday that “she seems very much like someone who would be married to Donald Trump,” then why didn’t the media do the same for Clinton?

If not, does have something to do with the fact that it’s a presidential election year unlike in 1998?

It’s all just a thought.

The relevant portions of the transcript from MSNBC’s Hardball on October 18 can be found below.

MELANIA TRUMP: As you can see from the tape, the cameras were not on. It was only a mike and I wonder if they even knew that the mike was on, because they were kind of a boy talk, and he was lead on — like egg on from the host to say dirty and bad stuff.

CNN’s ANDERSON COOPER: You feel the host Billy Bush started egging him on?

CHRIS MATTHEWS: Anyway welcome back to Hardball live from Las Vegas tonight. That’s Melania Trump, of course. She says her husband was egged on to say “dirty and bad” things about women in that leaked 2005 audio recording. She also said she believes her husband that it was just “locker room talk” and went on to blame her husband's opposition.

MELANIA TRUMP: I believe my husband. This was all organized from the opposition and with the details they have, did they ever check the background of these women? They don't have any facts. 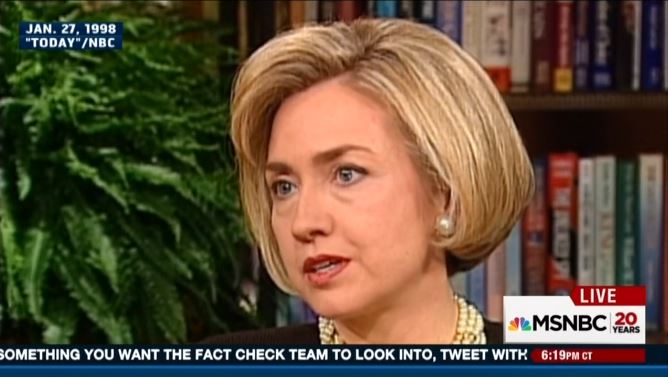 MATTHEWS: Mrs. Trump's defense of her husband sounds very similar many think to another political spouse whose husband faced accusations about his private behavior. Watch this interesting comparison.

MELANIA TRUMP: They want damage the campaign and why now? Why after so many years, why three weeks before the election?

HILLARY CLINTON [on NBC’s Today, 01/27/98]: This is part of the continuing political campaign against my husband.

MELANIA TRUMP: This is the media, it was NBC, it was Access Hollywood. It was left-wing and — left-wing media.

CLINTON [on NBC’s Today, 01/27/98]: It's this vast right wing conspiracy that has been conspiring against my husband since the day announced for president.

MELANIA TRUMP: I believe my husband.

MELANIA TRUMP: It's a lot of backlash on the media the way they treated him.

CLINTON [on NBC’s Today, 01/27/98]: This is deliberately designed to sensationalize charges against my husband, because everything else they’ve tried has failed. The defenses are very similar.

MATTHEWS: You know, I think that was a good piece of work there by putting those two together because the defenses are very similar.

KASIE HUNT: They are, quite frankly.