NBC News foreign correspondent Bill Neely interviewed Syrian President and brutal dictator Bashar Al-Assad that began airing on Wednesday night and, somehow, large portions of the hour-long special were dedicated to harping on Donald Trump’s candidacy, if his lack of foreign policy experience concerned Assad and if his Muslim ban hurt his feelings.

Neely spent the final 15 minutes of the program thoroughly hammering the murderous ruler for gassing his own people and starving much of his population (all of which he denied), but not before spending over nine minutes on the 2016 U.S. presidential election and what he made of Trump.

Neely asked a litany of pathetic questions about Trump that started with “what do you know of Mr. Trump” to what he’s “hearing in the media” to eagerly wanting to know if he’s following the election.

Citing past comments by Trump about Assad being “a bad guy,” the NBC correspondent wanted to know if this “worr[ied] you” to which Assad stated that he’s only concerned about the Syrian people. Eventually, the rapid-fire questioning grew even more desperate:

NEELY: From what you know of Mr. Trump, is he smart enough?

ASSAD: I don't know him. I have — when I sit with him face to face, I can judge him, but I only look at the person on the TV. On the TV, you can manipulate everything. You can make, how to say, you can rehearse, you can prepare yourself. That’s not the issue.

NEELY: Do you like what you see on TV of Mr. Trump?

NEELY: He seems to respect President Putin, does that give you hope that maybe he's a man you can do business with?

Turning to Trump’s Muslim ban, Neely lobbed this softball that allowed Assad to talk up Syria as a country that views “diversity” as “richness”: “Mr. Trump has also made comments about Muslims and not allowing Muslims into the United States. Did that anger you, upset you?”

Naturally, far less time was dedicated to Assad’s thoughts about Clinton but one question about her helped suggest that Trump would someone who could work with Assad and Russian President Vladimir Putin:

The infatuation with asking Assad questions that have nothing to do the ruinous state of affairs in his own country is far from a new strategy employed by the liberal media. Back in 2013, then-ABC’s World News anchor Diane Sawyer dithered away in questioning Assad what was on his i-Pod and country music star Shania Twain.

Similarly, then-NBC’s Today co-host Ann Curry interviewed then-Iranian President Mahmoud Ahmadinejad in September 2011 and lamented his “grueling schedule” to the point that she expressed concern to wonder: “Why do you work so hard?”

The relevant portions of the transcript from NBC News: Syria's President Speaks; An Exclusive Interview with Bashar Al-Assad on July 14 (via MSNBC) can be found below. 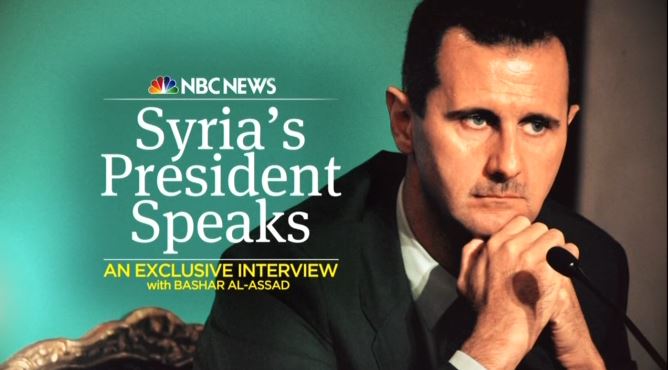 BILL NEELY: So there will be a new president. There are two main choices. One of them is Donald Trump. What do you know of Mr. Trump?

NEELY: And you’re here in Damascus. What are you hearing in the media about Mr. Trump?

BASHAR AL-ASSAD: The conflict between the American, but we don't pay much attention to it. I mean, even this race between the different, let's say, nominees, is changing the campaign. So what you hear today is not relevant tomorrow. So we cannot base our politics on day-to-day politics.

NEELY: But you're following this election?

NEELY: Simply rhetoric, so for example, talking about Mr. Trump, anything Mr. Trump says, you wouldn't necessarily believe that would be the policy of a President Trump?

ASSAD: I'm not talking about Trump or Clinton or anyone. I'm talking in general. It's not about the names. It's the principle for every president — American president in every campaign.

NEELY: He's made very few comments about Syria or the Middle East, but he's described you as a bad guy. Does that worry you?

ASSAD: That's his opinion. No, it's personal opinion. He doesn't have to see me as a good guy. The question for me, do the Syrians see me as a good guy or bad guy? Not American person or president or the media. I don't care about it. It's not part of my political map, let’s say.

NEELY: One of the things he's said and been very clear about is that he would be much tougher on ISIS. You would welcome that, wouldn't you? Because you just said President Obama isn't serious.

NEELY: From what you know of Mr. Trump, is he smart enough? 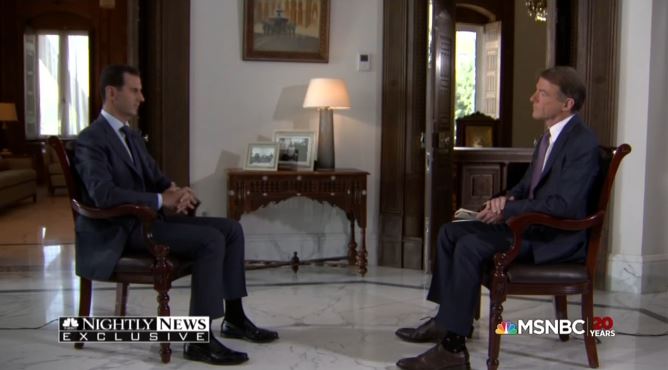 ASSAD: I don't know him. I have — when I sit with him face to face, I can judge him, but I only look at the person on the TV. On the TV, you can manipulate everything. You can make, how to say, you can rehearse, you can prepare yourself. That’s not the issue.

NEELY: Do you like what you see on TV of Mr. Trump?

NEELY: He seems to respect President Putin, does that give you hope that maybe he's a man you can do business with?

ASSAD: If he's genuine. I think he’s saying the right thing cause every person on Earth, whether they agree or disagree with Mr. — President Putin, they should respect him cause of his respect to himself and to respect the other — respect his values, respect the interest of his own people, and he's honest and genuine. So how can you respect someone with those descriptions? If he's genuine, I think he's correct, that's what I can say.

NEELY: Mr. Trump has also made comments about Muslims and not allowing Muslims into the United States. Did that anger you, upset you?

ASSAD: Yes, especially in Syria. It's a country made of many, many religions and sects and ethnicities. We think this diversity is richness, not the opposite. It's the way the government and the way the influential forces in society that made it a problem or a conflict. If you can have all those people living in one society, with real integration, with harmony, this is richness. This is for the interest of any society, including the United States.

NEELY: So Mr. Trump should not have made those comments about Muslims?

ASSAD: Anyone shouldn't make any discriminative rhetoric in any country. I don't believe in this kind of rhetoric, of course.

NEELY: Mr. Trump has no experience in foreign policy. Does that worry you? 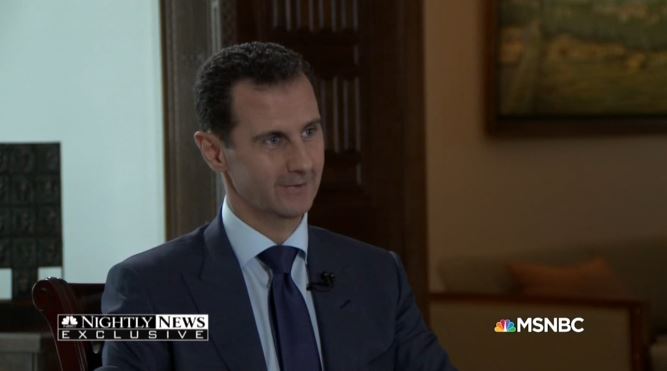 ASSAD: Who had this experience before? Obama? Or George Bush? Or Clinton before? None of them had any experience. This is the problem with the United States. You have to look for a statesman who has real experience in politics for years. Not because to have position in Congress for few years or minister of foreign affairs, for example. That doesn't mean you have the experience. The experience in states could be much, much stronger, so we don't think that most of the presidents of the United States were well versed in politics.

NEELY: So a man with no experience in foreign policy, in the White House, is not necessarily dangerous, in your view?

ASSAD: If anyone who doesn't have experience in any position, a White House or in the presidential palace in Syria, or another country, of course it's dangerous for the country generally. Of course, the United States as a great power, it could have more impact on the rest of the world, but it's not only about the experience. When you have institutions, they can help. It's about intention. Is it going to be with good experience, but with militaristic intentions, and so on. So you have to talk about many factors. It's not enough to talk only about the experience. 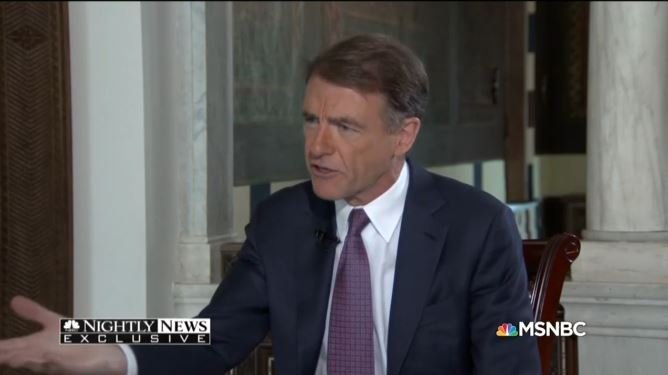 ASSAD: No because in the beginning of this crisis as well, we had same motto Assad must go, many times from nearly every western official, in different levels whether leader or any level. We never cared about it. We never. So you cannot talk about this is a threat. This interfering in our internal issues. We're not going to respond to. As long as I have the support of the Syrian people.