Each of the network evening newscasts devoted the duration of their air time to the terrorist attack on a gay nightclub in Orlando and, unfortunately, the networks immediately rushed to the issue of gun control and did only the bare minimum to highlight Omar Mateen’s radical Islamic beliefs.

In the first half-hour of the network newscasts, the CBS Evening News notably failed to highlight how Mateen’s father once praised the Taliban and pretended to be the Afghani President but instead touted a study on mass shootings by the far-left Southern Poverty Law Center (SPLC).

Leading off the report from correspondent Kris Van Cleave, weekday anchor Scott Pelley channeled former colleague and current NBC News correspondent Harry Smith in placing blame on not just the terrorist but his guns as well: “The terror attack here in Orlando, Florida, is proof once again that a man with a gun and a heart filled with hate is almost impossible to stop.”

Van Cleave followed by, unlike Smith, separating out the cases of terrorism on U.S. soil such as Chattanooga, Fort Hood, and San Bernardino, but then went astray by citing SPLC:

Lone wolf attacks have happened again and again. Last year, a husband and wife killed 14 at an office party in San Bernardino, California and five service members were targeted by a single shooter in Chattanooga, Tennessee. Major Nidal Hassan killed 14 service members at Fort Hood. All claimed to be inspired by Islamic terror groups. A 2015 study by the Southern Poverty Law Center looked at 63 attacks over a six year period and found 90 percent of the cases where the perpetrator was known was the work of one or two people. The overwhelming majority were men and nearly 60 percent involved fire arms.

Over on NBC Nightly News prior to Smith, weekday anchor Lester Holt brought forth the media’s ability to seem completely unaware that they’ve largely forced the gun control debate on Americans that don’t see that as an answer:

[T]oday's terror attack brings national security and the debate over gun control to forefront of the presidential campaigns once again. Both presumptive nominees took to Twitter to convey their condolences and in Donald Trump's case, to criticize the Obama administration and reiterate his controversial ban on Muslims.

Capitol Hill correspondent Kelly O’Donnell reported on the reaction of the presumptive Democratic and Republican presidential candidates and declared that the events of Orlando have “careened right into our heated national politics” with Hillary Clinton and Donald Trump initially reacting on Twitter before issuing further statements.

As for Trump, O’Donnell opined that he “defied customary restraint and criticized the President directly before he spoke to the nation” over his inability to use the words “radical Islamic terrorism.”

The transcript of the segment from June 12's NBC Nightly News can be found below. 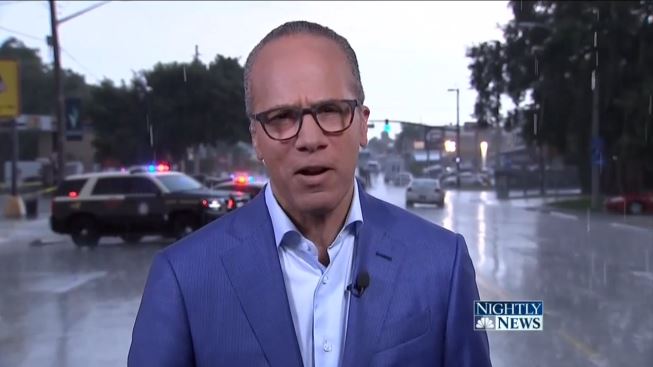 LESTER HOLT: And on the crime scene behind us, today's terror attack brings national security and the debate over gun control to forefront of the presidential campaigns once again. Both presumptive nominees took to Twitter to convey their condolences and in Donald Trump's case, to criticize the Obama administration and reiterate his controversial ban on Muslims. Kelly O'Donnell is covering the reaction from the trail.

KELLY O’DONNELL: A national crisis that unfolded in Orlando, but careened right into our heated national politics. Twitter, a first point of contact, Donald Trump began matter of factually. “Really bad shooting in Orlando.” Hillary Clinton: Woke up to hear the devastating news from Florida.” Yes, prayers offered and concerns sent, but the tone turned sharply more partisan. Trump claimed credit. “Appreciate the congrats for being right on radical Islamic terrorism, I don't want congrats, I want toughness & vigilance.” A theme he talked about just yesterday in Pittsburgh.

O’DONNELL: Trump defied customary restraint and criticized the President directly before he spoke to the nation. “Is President Obama going to finally mention the words radical Islamic terrorism? If he doesn't he should immediately resign in disgrace.” The President chose his own words carefully using terror, hate and guns. An issue driving Hillary Clinton's campaign.

HILLARY CLINTON [on 06/03/16]: I will take on the gun lobby to try to achieve common sense gun safety reforms. [SCREEN WIPE] The losses associated with gun violence are just unimaginable. 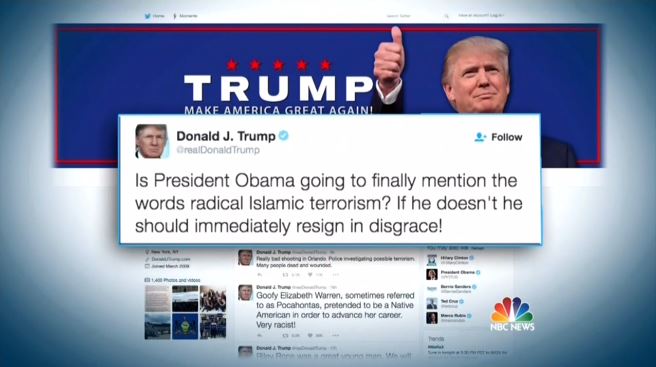 O’DONNELL: Like Obama, Clinton's formal written statement expressed solidarity. “To the LGBT community: Please know that you have millions of allies across the country. I am one of them.” Late today, Trump went beyond 140 characters and issued a lengthy statement that hits both Obama and Clinton as “weak” on admitting migrants from the Middle East. “Hundreds,” Trump said, “implicated in terrorism in the United States.” And back on Twitter, Trump renewed his controversial call for a ban on Muslim immigrants saying they cannot be adequately screened. Both Trump and Clinton plan to deliver speeches tomorrow that will address the Orlando tragedy, but the President and Clinton have postponed their first joint campaign appearance that would have happened this week. Lester?