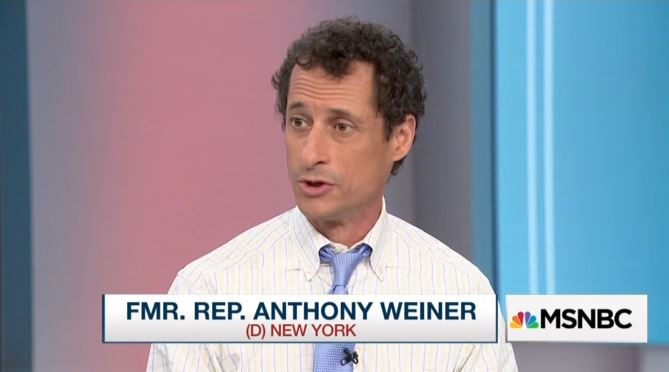 Touting a soon-to-be-released documentary about scandal-ridden New York Democrat Anthony Weiner, Michael M. Grynbaum parroted in Sunday’s New York Times claims from filmmaker Elyse Steinberg that the life of their subject has been “almost Shakespearean” with his rise and fall due to his well-documented urges to trade sexually explicit text messages with women that aren’t his wife.

For those that aren’t already amused by him being compared to any of host of famous Shakespeare characters, a subsequent article on the documentary by Ginia Bellafante stated that “[t]he Clintons are Davos” compared to Weiner and his wife Huma Abedin (a Hillary Clinton confidant no less) resembling “Whole Foods.”

Going back to Grynbaum, he admitted right away in the headline that the documentary showcased “a political campaign set on self-destruct” in a nod to Weiner’s 2013 campaign for Mayor of New York City.

Grynbaum also sought to paint Weiner as a relatable and sympathetic figure akin to Larry David’s lead character on the HBO show Curb Your Enthusiasm.

“At times, the proceedings resemble a particularly painful episode of “Curb Your Enthusiasm,” with the wisecracking, can’t-help-himself protagonist sinking deeper and deeper into a quicksand of his own making,” Grynbaum observed.

He made clear that parts of the documentary were painful upon seeing how much access Weiner granted to Steinberg and fellow filmmaker Josh Kriegman with examples showing Abedin admitting that she’s “living a nightmare” and raw reactions to when “new online infidelities” emerged.

Giving credence to a scandal-ridden liberal in a way that The Times wouldn’t dare do for a conservative, Grynbaum gave Steinberg room to drop the Shakespeare comparison:

“He was reduced to a character and a punch line, and we felt that there was a more complex story to be told,” said Ms. Steinberg, whose last documentary examined the trial of Saddam Hussein. Mr. Weiner, she added, brought the appeal of an “almost Shakespearean” figure: “intense self-awareness, real insight and then complete blindness.”

Grynbaum ruled that, in the end, Weiner will be pleased with the documentary on his failed mayoral bid because “[h]is skills as a retail politician are on full display, energizing parade-goers and exchanging lopsided grins with subway riders who flash him a thumbs-up” in addition to Weiner “winning over a hostile crowd in the Bronx, a scene so stirring that, at the time, the campaign requested Mr. Kriegman’s footage and distributed it to supporters.”

“Yet it also presents Mr. Weiner as a creature of that world, even as he is undone by it,” the reporter stated in a brief caveat.