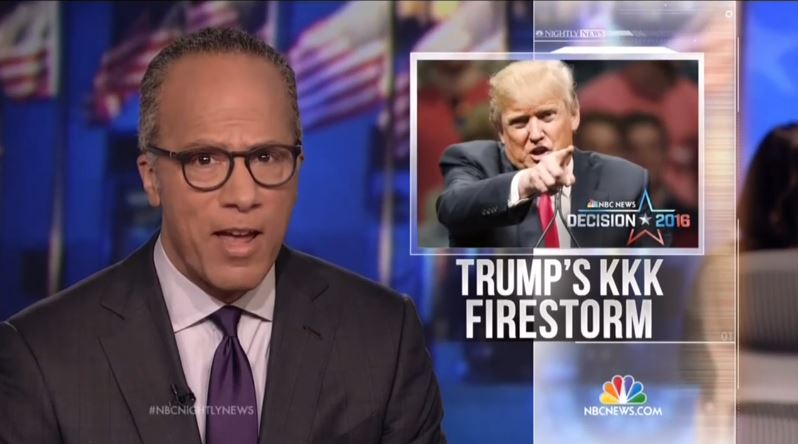 On the eve of Super Tuesday, the network evening newscasts went all out with 24 minutes and 31 seconds of 2016 coverage and while both parties were covered, the networks made it loud and clear that Donald Trump was far and away the most important story to them with over 62 percent of that time spent salivating on how “there’s not much” Trump opponents “can do to stop him from getting the nomination.”

Meanwhile, Democratic presidential candidates Hillary Clinton and Bernie Sanders were unable to even come within half of Trump’s absurd total as the pair combined for only six minutes and four seconds on ABC’s World News Tonight, the CBS Evening News with Scott Pelley, and NBC Nightly News.

NBC Nightly News offered the starkest contrast between the candidates as Trump was awarded five minutes and 46 seconds across three segments harping on his refusal to condemn the Ku Klux Klan and former leader David Duke, the growing uneasiness with a Trump nomination, and the scuffle at a rally in Virginia.

Anchor Lester Holt displayed the media’s plan of being able to have their cake and eat it too by denouncing Trump but also hanging on his every word: “Outside of Texas, Donald Trump seems poised to score some very big wins in tomorrow's primary contests despite some conflicting and curious answers to a question that's left him exposed over very sensitive racial ground.”

Amidst all the Trump coverage, a scant seven seconds was devoted to a single Cruz soundbite railing against the frontrunner for “represent[ing] everything you're mad about Washington, the deal-making that doesn't stand with the working men and women.”

The media’s hypocritical chiding of Rubio for hitting back at Trump and his insults saw the light of day on NBC as well with Trump correspondent Katy Tur lamenting during Rubio’s half-minute of mentions that “Rubio got into the mud” over the weekend as there’s “time is running out for Trump's competitors to make their case.”

On CBS, anchor Scott Pelley lectured the entire Republican Party for putting on a campaign that he dubbed “petty, profane and unprecedented” but also gushed that Tuesday’s results “may generate irreversible momentum for Hillary Clinton and Donald Trump.” 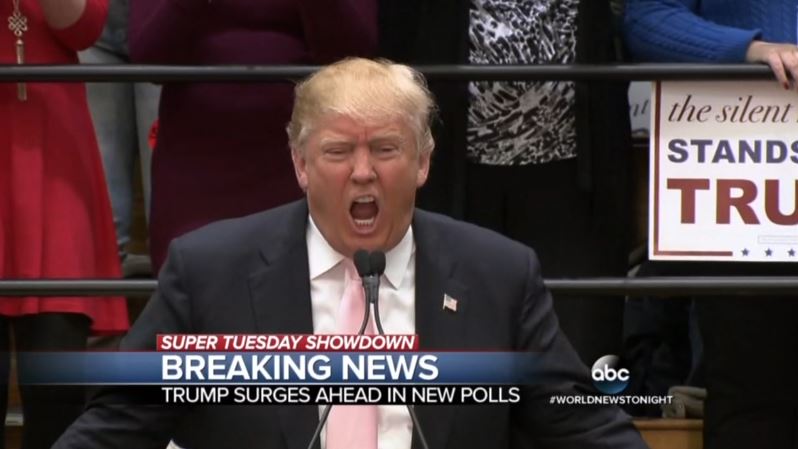 While on the subject of CBS, it’s important to note the CBS Chairman and Democratic Les Mooves told the Hollywood Reporter on Monday that while Trump’s candidacy “may not be good for America,” it’s been very beneficial for his network’s news business.

Lest we forget World News Tonight, the ABC newscast gave nearly the entire opening report from Republican correspondent Tom Llamas to the violence at that Trump rally and his KKK comments before anchor David Muir read a news brief on Melania Trump’s CNN interview with Anderson Cooper.

Over half the Democratic coverage came from ABC as Democratic campaign correspondent Cecilia Vega’s piece took up three minutes and 12 seconds plus 29 seconds of a third block of chief White House correspondent Jonathan Karl briefly breaking down the scenarios on Super Tuesday for both parties.

On the Spanish-language networks Telemundo and Univision, the skewed coverage toward Trump was less drastic than their English counterparts, but was nonethless in favor of the billionaire. Overall, the pair combined for three minutes and eight seconds on Trump versus one minute and 51 seconds for Rubio. While ABC, CBS, and NBC mustered only 51 seconds for Cruz, Noticiero Telemundo and Noticiero Univision carved out two minute and 49 seconds for the conservative Senator from Texas.

While the liberal media claim to spend endless amounts of time bemoaning Trump’s positions and airing their grievances, the complaints appear to have been far outweighed by their interest in fetching ratings and pushing Trump as the only choice for conservatives and Republicans. 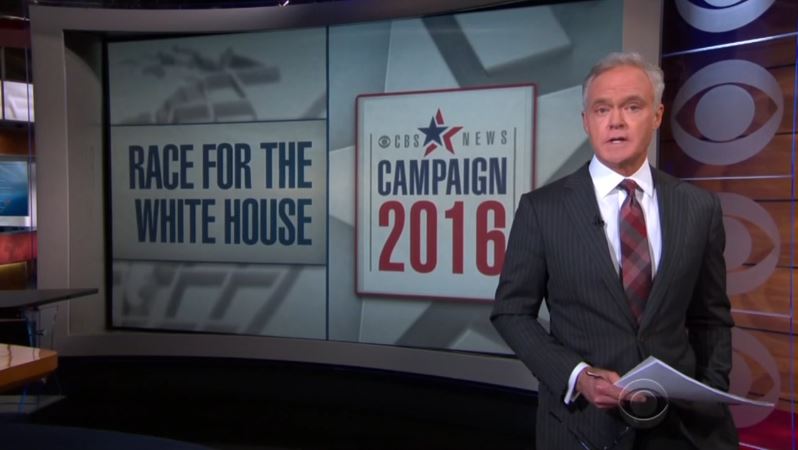 By essentially deleting his opponents from their airwaves, the networks (and cable outlets) have been employing a visible strategy to force the billionaire on GOP primary voters and through to the general election against Clinton or Sanders.

My colleague Rich Noyes brilliantly highlighted this very problem as it was evident for months with the month of January seeing Trump be bequeathed 60 percent of the total GOP race airtime on the network evening newscasts (with Cruz well behind at 30 percent and Rubio at four percent).

The Media Research Center’s Bias the Minute writer Mike Ciandella outlined the same pattern on CNN in an even shorter window as between August 24, 2015 and September 4, 2015, Trump was the topic of discussion in over 77 percent of their primetime election segments. For reference, Jeb Bush came in second for this study but only attracted roughly 12 percent.

Editor's Note: Many thanks to MRC Latino's Edgard Portela for contributing the Spanish-language network evening newscast totals to this blog.