CBS and NBC: Obama ‘Plans to Follow the Constitution’ Against GOP ‘Roadblock’ on SCOTUS Vacancy

The “big three” networks ABC, CBS, and NBC all made sure to weigh in Tuesday night on President Barack Obama’s comments hours earlier about his desire to fill the Supreme Court vacancy left by the late Justice Antonin Scalia and spun them as Obama “plan[ning] to follow the Constitution” against “the Republican roadblock” in the Senate.

On the CBS Evening News, anchor Scott Pelley featured an extended brief on the matter with a soundbite from the President but not before Pelley footnoted the funeral arrangements for Scalia this weekend and how “Senate Republicans want to delay replacing Scalia for nearly a year so the next president can make the choice, but today, Mr. Obama said he plans to follow the Constitution.”

One day after she expressed glee at the notion that the debate could harm Republican senators and cause the Democrats to regain the Senate in November, NBC News correspondent and MSNBC host Andrea Mitchell returned on NBC Nightly News to hype that Obama “respond[ed] for the first time to the Republican roadblock against his filling the vacancy on the high court.”

Mitchell was also hopeful about whomever Obama selects as she noted “a small crack today in the Republican hardline” as Senate Judiciary Chairman Chuck Grassley (R-Iowa) stated that he “would wait until the nominee is made before” deciding on how to proceed.

Following a clip of Grassley on an Iowa radio station, Mitchell admitted that Grassley later told NBC News that “he’s not open to a confirmation.”

As for ABC’s World News Tonight, chief White House correspondent Jonathan Karl broke ranks to subtly poke holes in the liberal talking point that the President is in no different a scenario than what happened with then-President Reagan and future Justice Anthony Kennedy in 1987:

The President today pointed out there is precedent for the Senate confirming a Justice during a president's final year in office. President Reagan's nominee Anthony Kennedy was confirmed in 1988, but Kennedy's case is an unusual one. The vacancy came the previous year in July 1987, when Justice Lewis Powell resigned. Reagan first nominated Robert Bork, who the Senate rejected after a long, bitter debate. Reagan then nominated the less-controversial Kennedy in November 1987. The Senate confirmed him three months later, 97-0.

The transcript of the segment from February 16's NBC Nightly News can be found below. 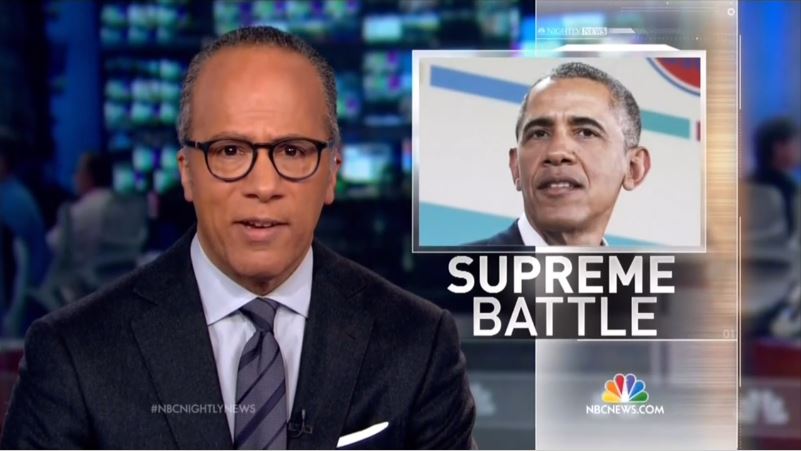 LESTER HOLT: Funeral arrangements have been announced for late Supreme Court Justice Antonin Scalia. On Friday, Scalia will lie in repose in the Court's Great Hall. On Saturday, a funeral will be held at the National Shrine in Washington, D.C. Meanwhile, the battle continued over replacing Scalia which the President also addressed late today as our Andrea Mitchell reports.

ANDREA MITCHELL: In California, the President responding for the first time to the Republican roadblock against his filling the vacancy on the high court.

OBAMA: I'm amused when I hear people who claim to be strict interpreters of the Constitution suddenly reading into it a whole series of provisions that are not there.

MITCHELL: But will his nominee even get a hearing? A small crack today in the Republican hardline from the powerful Judiciary Chairman Chuck Hrassley in charge of any confirmation hearing telling Iowa radio —

REPUBLICAN SENATOR CHUCK GRASSLEY (Iowa): I would wait until the nominee is made before I would make any decisions.

MITCHELL: But Grassley tonight telling NBC he's not open to a confirmation. Tonight, the President also revealing what he wants in Scalia's successor.

OBAMA: We're going to find somebody who is an outstanding legal mind, somebody who cares deeply about our democracy and cares about rule of law. [SCREEN WIPE] And any fair-minded person, even somebody who disagreed with my politics would say would serve with honor and integrity on the court. 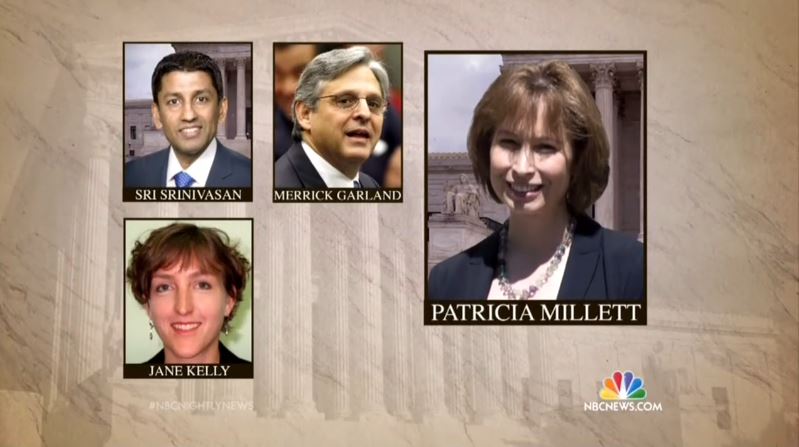 MITCHELL: The President has a list said to include Sri Srinivasan of Washington, D.C., and Jane Kelly of Iowa, confirmed as federal judges three years ago unanimously. Also, Washington Appeals Court Judges Merrick Garland, long on the President's list although older at 63 and Patricia Millett, an experienced litigator and former clerk to Justice Ginsburg. Who would Scalia choose to replace himself? There were clues in a dissent he wrote last June when he called for more religious and geographic diversity on the court noting all “studied at Harvard or Yale law school,” five Catholics and three Jews, “not a single evangelical Christian,” four including Scalia from New York City. And meanwhile tonight, law enforcement officials and the owner of the ranch where Scalia died are completely discounting speculation about foul play, saying a pillow found in his bed was above his head, not over his face and the reason replacing Scalia is so politically fraught? His death represents a seismic shift in a Court that has had a conservative 5-4 majority for half a century. Lester?