After FNC’s Outnumbered offered near unanimous condemnation of National Review’s anti-Donald Trump issue and editor-in-chief Rich Lowry a few weeks ago, Lowry responded as a guest host on Tuesday’s show and not surprisingly was bombarded with criticism and accused of being “elitist,” “really, really rude,” and part of “the establishment” for having “insulted” voters by opposing Trump.

The show started late with live footage of a Hillary Clinton rally in New Hampshire but co-host Andrea Tantaros started right afterward by turning to Lowry and declaring that he “took a lot of blowback on that cover” and demanded to know why he celebrated Trump’s loss to Ted Cruz.

Lowry first maintained that Cruz’s win was “an enormous win” for conservatives “[d]espite the fact that he had various establishments kowtowing to Donald Trump because they so dislike Ted Cruz” as “Cruz did this the right way, he did it the old fashioned” way with “a grassroots organization and he inspired conservatives.”

Tantaros jumped in to defend Trump (as she frequently does) and argued that Lowry should “focus on the establishment” and how: “[T]he two anti-establishment candidates, you would acknowledge, they are not in the sort of insides the beltway. They get a lot of heat, Trump and Cruz. They came in gold and silver.”

Lowry sighed and blurted out “oh my God” before asking Tantaros if she’s “been paying attention to what Bob Dole says about Donald Trump and other senators say about Donald Trump” as “they sense” that “ultimately, ideas don't matter to him, only quote-unquote getting something done is so they have tilted towards Trump and against Cruz.”

Co-host Harris Faulkner also aided Trump and touted the belief that the large turnout on both sides was because of Trump’s candidacy to which co-host Sandra Smith repeatedly tried (unsuccessfully) to compel Lowry to say something “positive about the campaign and the performance that Trump did have in Iowa.”

The debate grew personal as Tantaros turned up the heat and started name-calling Lowry and his magazine for their issue opposing Trump:

TANTAROS: But, Rich, do you see why the voters are angry? Because the establishment has put up candidates like McCain and Romney who were not conservatives in the past. So, this is really what’s bizarre to me —

LOWRY: Andrea, he lost. He lost last night because conservatives went out and made the case's not a conservative[.]

A few minutes later, Lowry exposed Trump’s high unfavorability ratings and how many Iowa voters decided who their candidate would be in the final days and didn’t like what they saw in Trump.

Tantaros dismissed Trump’s loss as not being entirely all that significant because Iowans are evangelicals and “not a natural fit” for who Trump is but still finished second in what she spun as “astounding and the point is that I would never besmirch the voters' opinions. I don’t know why the establishment has been besmirching them and discounting them and insulting them for weeks and weeks.”

While Tantaros continued to utter the term “establishment” over and over again, Lowry challenged her to define what that actually means:

TANTAROS: It means the typical Beltway infrastructure in the past.

LOWRY: Then why is he pro-Trump?

The relevant portions of the transcript from FNC’s Outnumbered on February 2 can be found below. 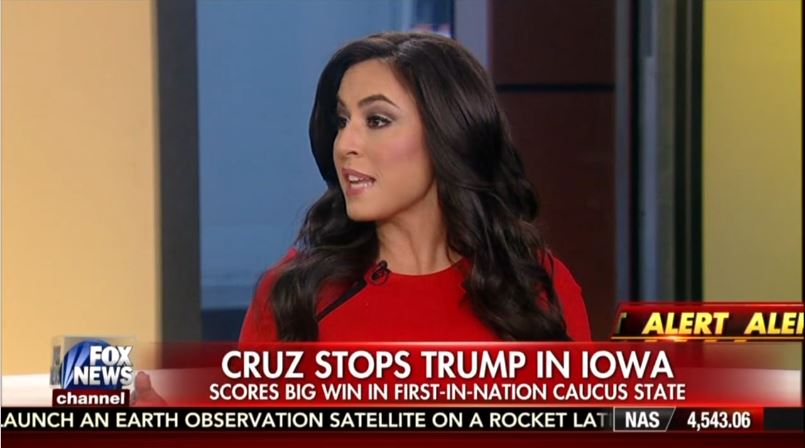 ANDREA TANTAROS: In the meantime, a strong third place finish for Marco Rubio, beating expectations and almost taking out Trump, coming within a percentage point. Alright, I’m going to go to you, Rich, you took a lot of heat. You are the editor-in-chief of National Review if our viewers don’t know this, for the against Trump edition. You took a lot of blowback on that cover Last night you saw Ted Cruz, Donald Trump, they are not establishment candidates. I mean, Donald Trump won the most votes in Iowa that no other Republican GOP candidate ever has in the caucus other than Ted Cruz. How can you just tweet out on National Review, “you are welcome” and make that a win?

RICH LOWRY: Look, this is an enormous win. Ted Cruz is a conservative. There is no doubt about his principles and he went out there and won despite the fact that he opposes the ethanol mandate. Donald Trump, by the way, pandered all he could on ethanol despite the fact that the governor of Iowa opposed him. Despite the fact that he had various establishments kowtowing to Donald Trump because they so dislike Ted Cruz and Ted Cruz did this the right, he did the old fashioned. He built a grassroots organization and he inspired conservatives, so I thought it was a wonderful night for him. My hats off

TANTAROS: There’s no question that ethanol — going against ethanol win was huge, but if you look at it and focus on the establishment, Rich, the two anti-establishment candidates, you would acknowledge, they are not in the sort of insides the beltway. They get a lot of heat, Trump and Cruz. They came in gold and silver.

TANTAROS: Can you just — 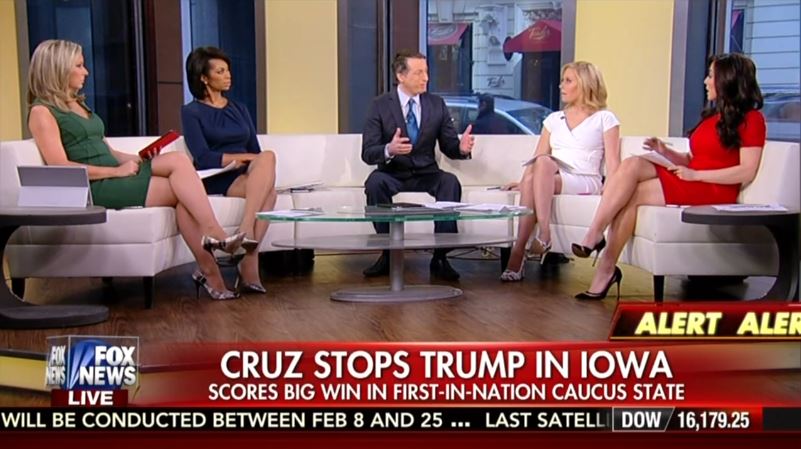 LOWRY: Have you been paying attention to what Bob Dole says about Donald Trump and other senators say about Donald Trump? What they sense about Donald Trump is, ultimately, ideas don't matter to him, only quote on quote getting something done is so they have tilted towards trump and against Cruz. Now, look, there is no doubt if you look at his electorate, 90 percent of the vote was won by people who never held office or didn't hold federal office before 2010. That includes Ted Cruz. That includes Marco Rubio, it includes Ben Carson. All three of those men are principles conservatives, whereas Donald Trump isn't.

TANTAROS: Right, but you cannot argue, Harris, with the fact that both of them have had everything thrown at them from the establishment and the Beltway they did pretty well. Trump did well in rural Iowa. He did under perform polls, though.

HARRIS FAULKNER: both sides of the political aisle, you had fire in the hearts and bellies of Americans who went out to caucus and the snowstorm held off so they had luck with that. That was mostly Donald Trump.

SANDRA SMITH: So, Rich, can I take a second to press you of all people. Is there anything you can say positive about the campaign and the performance that Trump did have in Iowa. I mean, he’s tweeted out, he’s actively tweeting out now, he said because I was told I could not do well in Iowa, he said I spent very little there. He said a fraction of Cruz and Rubio and he came in a strong second. Do you give him credit?

LOWRY: No, he was talking about winning Iowa.

SMITH: Do you give him any credit though?

LOWRY: I give him credit for highlighting the issue of immigration. I give him credit for hitting a chord out there, especially with disaffected voters. That’s very important, but he went to Iowa and he lost and he was beaten fair and square by Ted Cruz and if this thing had gone one more day, Rubio probably would have clipped him and it's because he skipped the Fox debate. He insulted one of the anchors. He called her these vicious, personal names and was so arrogant he said I could shoot people and I would still get support and there was a reason his support collapsed in the final days. You look at the entrance polls, people decided the last week, the last two days, the last day. They went with Rubio and Cruz. 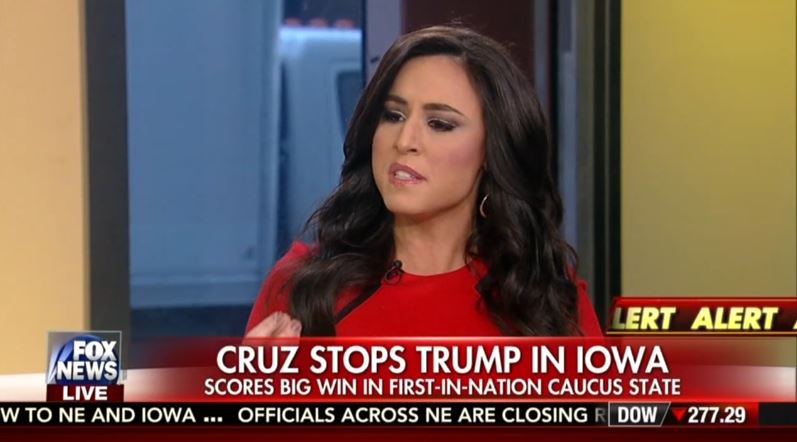 TANTAROS: But, Rich, do you see why the voters are angry? Because the establishment has put up candidates like McCain and Romney who were not conservatives in the past. So, this is really what’s bizarre to me —

LOWRY: Andrea, he lost. He lost last night because conservatives went out and made the case he's not a conservative and yes, there was a lot of blowback to what we did and what others like Mark Levin and Glenn Beck and Ben Sasse. But I haven't seen anyone stand up and say no, you are wrong, Donald Trump is has always been with us. He’s a principled Reagan conservative. No one can make that case because it doesn't exist.

MELISSA FRANCIS: I wish it was as noble as you’re making it out to me, but what this means to me is money still rules the day. If you look at how much money Ted Cruz spent. For example, $3.6 million at the end of 2015 alone to Cambridge Analytica, which built psychological profiles of voters in order to micro-message them what to do. He spent a fortune. Hold on, Trump hired that firm L2, too, but he only paid them $235,000 and took them on as consulting. He tried to do it without spending money because he’s rich and cheap and that’s how you do stuff. It didn't work and I think that's the lesson he learned. He only spent $700,000 on people. Nothing compared to what Cruz.

LOWRY: And going back to Trump, the thing about Trump, you look at Des Moines Register poll. His fav-unfav was 50-50. Iowa voters — and I don’t think those of us sitting in TV studios should judge Iowa voters, focused on this very carefully and they looked at trump very carefully and a lot of them didn't like what they saw because Iowans are conservative.

TANTAROS: They’re evangelicals. It’s not a natural fit, but for Trump to do that well in rural, religious iowa, it is astounding and the point is that. I would never besmirch the voters' opinions. I don’t know why the establishment has been besmirching them and discounting them and insulting them for weeks and weeks

TANTAROS: And it’s very elitist and that’s why people are so upset at this, Rich.

LOWRY: So am I, we can agree on that.

TANTAROS: It means the typical Beltway infrastructure in the past. 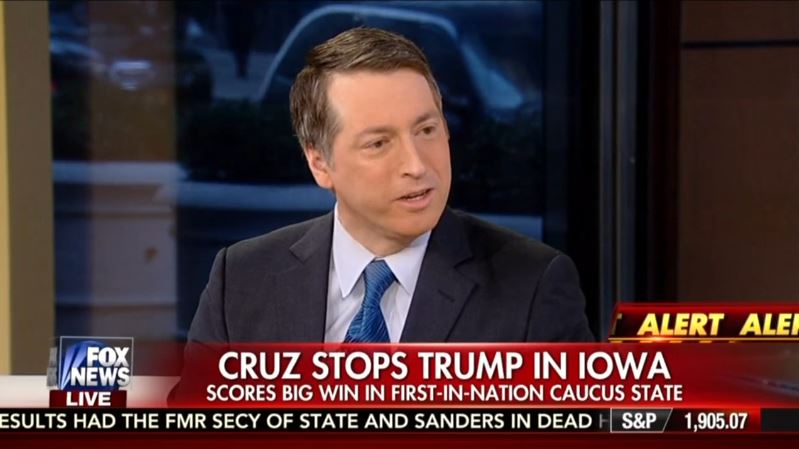 LOWRY: Then why is he pro-Trump?