Further displaying their ability to have no shame, the far-left, anti-religious New York Daily News emerged late Thursday to unveil the cover of its Friday paper that compares alleged San Bernardino gunman Syed Farook to the “terrorist” National Rifle Association (NRA) and long-time executive Wayne LaPierre plus four other perpetrators of mass killings over the past three years.

With a picture of Farook in the top right corner, the main headline reads: “The News Says He’s a Terrorist (But so are these guys...)(AND this guy).”

Of course, the person below the “AND this guy” heading was a picture of LaPierre and below the “But so are these guys” portion was alleged Planned Parenthood shooter Robert Dear, alleged Charleston, S.C. church gunman Dylann Roof, Newtown, Connecticut school shooter Adam Lanza, and the convicted murderer behind the Auora, Colorado movie theatre shooting in James Holmes.

Discussing both the Thursday and Friday covers on CNN Tonight, host Don Lemon admitted that he was wrong for extolling the Thursday cover on his Wednesday night show and rather concluded that it “was a bit harsh and mocked people for praying.”

Lemon owned up for touting the New York tabloid and instead chided the tabloid’s “harsh cover” and failing to recognize that “[t]here’s nothing wrong with praying and everyone who comes on says my faith is getting me through this.”

Panelist Hugh Hewitt commented by maintaining that while there is such a thing as the First Amendment: “I would point out they have offended most of America when they mocked prayer. Romans 12:15 says: ‘Mourn with those who mourn, not mock those who are grieving.’”

Fellow panelist and liberal New York Times columnist Nicholas Kristof also opined on the covers by declaring that “it's a little much to call the NRA terrorists” and while “I certainly disagree profoundly with what they do,” he made the caveat that “there is a distinction” between the NRA and terrorism.

In addition, Media Research Center Brent Bozell released two statements condemning Thursday’s “offensive cover” and members of the liberal media who “are praising this garbage.” Bozell later added that this “disgraceful” act should lead to an apology, firing those responsible, and investigating how the cover came to be published.

Bozell then took to the airwaves of the Fox Business Network (FBN) on Thursday both in the afternoon and early evening to elaborate upon both statements and blast this “anti-religious” cover. You can find our staff postings of his appearances here and here.

The relevant portion of the transcript from CNN Tonight on December 3 can be found below. 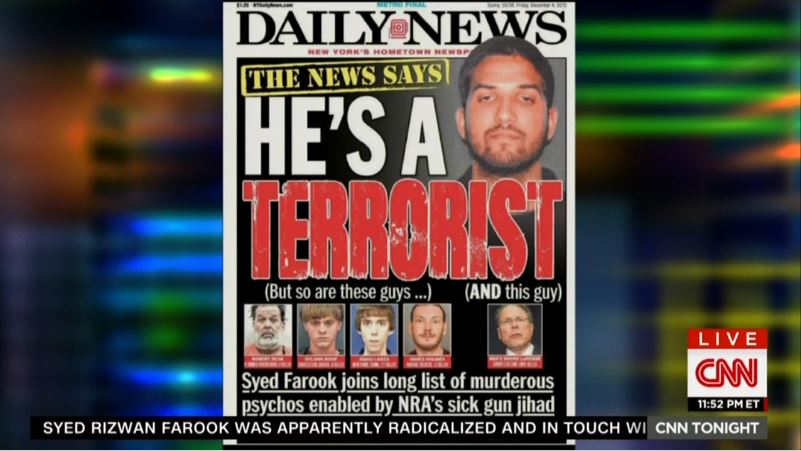 DON LEMON: Back now with Hugh Hewitt and Nicholas Kristof. Hugh, so this is the cover we put up yesterday from the Daily News that we put up saing “God isn’t fixing this” when we’re talking about the people running for president and the Speaker of the House asking people for prayers and you know, after I studied it more, I did think this was a bit harsh and mocked people for praying. There’s nothing wrong with praying and everyone who comes on says my faith is getting me through this. A harsh cover. Check this one out. This is from the new cover that will come out tomorrow. “He’s a terrorist” and has, you know, Farook up there and then it has Dylann Roof and some of the terrorists, you know, some of the recent terrorists, Adam Lanza, but then it has the head of the NRA as well. A quick response from you, Hugh?

HUGH HEWITT: The First Amendment is as absolute as the Second Amendment, Don. If they want to be idiots at various newspapers, they’re allowed to be idiots. If they want to make absurdly, slanderous comments, they are protected. I wouldn’t have it any other way, but I would point out they have offended most of America when they mocked prayer. Romans 12:15 says “Mourn with those who mourn, not mock those who are grieving.”

LEMON: What do you think, Nicholas?

NICHOLAS KRISTOF: I mean, I think it's a little much to call the NRA terrorists. I certainly disagree profoundly with what they do but there is a distinction.