On Tuesday, the “big three” networks of ABC, CBS, and NBC censored from their evening newscasts any mention of the House of Representative beginning the procedures to impeach IRS Commissioner John Koskinen on the heels of Republican Congressman and House Ways and Means Committee Chairman Paul Ryan’s expected ascension to Speaker of the House.

It should be noted that this blackout comes after the networks failed to note the Friday news dump by the Department of Justice that Lois Lerner and other IRS figures will not be charged in the agency’s scandal targeting tea party groups.

Picking up the pieces for the networks, the Fox News Channel (FNC) program Special Report led off its Tuesday edition with a full story from correspondent Doug McKelway. In the open, host Bret Baier explained that “House Republicans are going after the President's tax man” as “[t]hey have begun the process of trying to impeach IRS Commissioner John Koskinen.”

McKelway started his piece by observing that “[t]he spark that ignited these proceedings was the decision last week by the Department of Justice not to press charges against Lois Lerner or anyone else at the IRS for the targeting of conservative groups.”

The FNC correspondent also noticed that the escalation against Koskinen and the scandal-ridden agency could be a sign of things to come under the expected speakership of Ryan, who had a rather heated exchange with Koskinen on June 20, 2014 in a Ways and Means Committee hearing in which Ryan told him that “I don’t believe you.”

The introduction of the impeachment resolution was done by House Oversight Committee Chairman Jason Chaffetz (R-Utah) but hours after Senate Finance Committee Chairman Orrin Hatch (R-Utah) praised Koskinen for the job he’s doing in “trying to put things in order.”

Vid: @GeorgeWill: Koskinen impeachment “will test of power of the media to continue ignoring the story” #TTT16 pic.twitter.com/tscfYFQwDh

McKelway closed by explaining how exactly the impeachment process will work: “The House Oversight Committee will have to debate the articles of impeachment against Koskinen and then vote in committee to impeach him. It will then move to the full House.”

The relevant portion of the transcript from FNC’s Special Report with Bret Baier on October 27 can be found below. 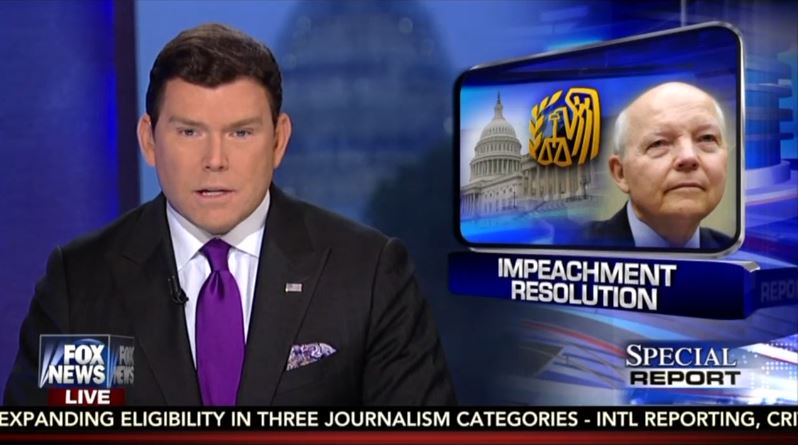 BRET BAIER: House Republicans are going after the President's tax man. They have begun the process of trying to impeach IRS Commissioner John Koskinen. Correspondent Doug McKelway is here to tell us why. Good evening, Doug.

DOUG MCKELWAY: Evening, Bret. The spark that ignited these proceedings was the decision last week by the Department of Justice not to press charges against Lois Lerner or anyone else at the IRS for the targeting of conservative groups. When that decision was made, the Chairman of the House Oversight Committee, Jason Chaffetz, tweeted that “[a] clear message must be sent that using government agencies to stifle citizens’ freedom of speech will not be tolerated.” There may be another factor that are spurred the impeachment resolution — the imminent change in House leadership. Paul Ryan, as Chairman of the House Ways and Means Committee, also had jurisdiction over the IRS. Listen to his last words to Koskinen on June 20th of 2014.

IRS COMMISSIONER JOHN KOSKINEN [on 06/20/14]: I have a long career. That's the first time that anybody has said they don't believe me.

MCKELWAY: It may be that with Ryan expected to come in, Chairman Chaffetz felt he had a green light to go with an impeachment resolution. Chaffetz said today, quote: “Commissioner Koskinen violated the public trust. He failed to comply with a congressionally-issued subpoena, documents were destroyed on his watch, and the public was consistently misled.” Ranking member Elijah Cummings late today lambasted Chaffetz’s move, quote: “There is zero evidence that Commissioner Koskinen engaged in these acts — to the contrary, the IRS has now spent $20 million and 160,000 employee hours cooperating with this misguided investigation with no evidence of any political targeting.” The resolution occurred just hours after Koskinen testified on the Senate side about his implementation of bipartisan recommendations from the Senate Finance Committee to repair the broken IRS. In closing, chairman Orrin Hatch was much more accommodating to Koskinen than those on the House side. 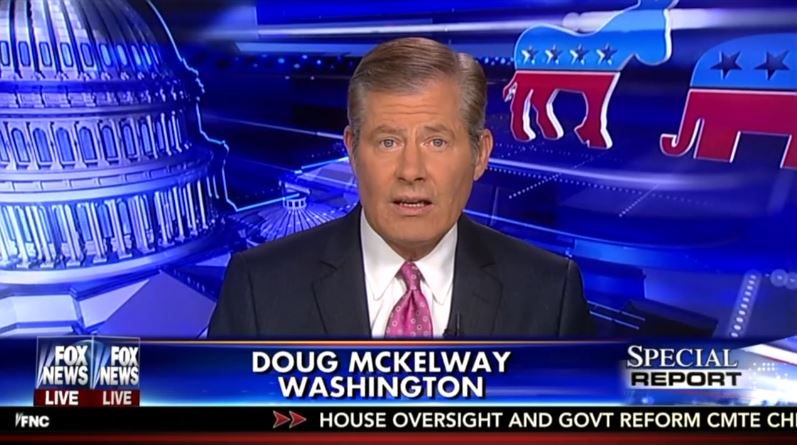 MCKELWAY: The House Oversight Committee will have to debate the articles of impeachment against Koskinen and then vote in committee to impeach him. It will then move to the full House. Now, whether Ryan is the expected new Speaker wants this on his plate right out of the gate, we'll find out and just moments ago, Bret, the IRS told us, quote, that it “vigorously disputes the allegations in the resolution. It says that “we have fully cooperated with all of the investigations.” Bret?

BAIER: Okay, Doug, thank you. More on this with the panel.