On Wednesday night, the major broadcast networks came out in full force to praise a “defiant” President Barack Obama for having made a “sweeping speech with fiery words” on the Iran nuclear deal that included the President following some in the media by comparing Iranian hardliners to Republicans against the deal (even though some Democrats are opposed to it as well).

Leading the way was NBC Nightly News as anchor Lester Holt began the program’s coverage of the speech by observing “[t]he battle over the Iran nuclear deal grew even more intense today as President Obama gave a sweeping speech with fiery words for critics.”

Hanging on to Obama’s every word at American University, senior White House correspondent Chris Jansing hailed him for being “on the attack” and “answering critics of the Iran nuclear deal with an impassioned, nearly hour-long defense.”

Adding that the speech was given at the same school where President John K. Kennedy “famously made the case for nuclear diplomacy” in 1963, Jansing further lectured that “Mr. Obama took sharp aim at his critics, saying they're the same people who argued for war in Iraq.”

It was only following a soundbite of President Obama invoking the Iraq War did Jansing bring up these comments made by the President comparing Iranian radicals to the Republican Party: “It's those hardliners chanting ‘death to America’ who are most opposed to the deal. They've been making cause with the Republican caucus.”

Chalking those against the deal to being just “entrenched opponents,” Jansing reported that they’re being bolstered by “pro-Israel groups, spending big” to the tune of “[a] $25 million TV ad blitz.”

While she did mention that opposition to the Iran deal in polling “has doubled just since June,” the NBC correspondent touted Obama’s plea to Americans to challenge their members of Congress as they head into their summer recess and meetings with constituents.

The Wednesday edition of ABC’s World News Tonight devoted only 41 seconds to the President’s speech, but was not without plenty of praise for the President and zero mention of a legitimate opposition or sagging poll numbers.

Anchor David Muir hyped that Obama spent part of his day “taking on critics of his landmark nuclear deal with Iran, warning that the only alternative to the deal is war.”

After a soundbite from the President’s remarks, Muir gushed that the commander-in-chief was “defiant” and explained how Obama ruled that “Republican opposition to the deal is, quote, ‘knee-jerk partisanship,’” with “pundits critical of the deal ‘armchair nuclear scientists.’”

Also providing a news brief on the President’s speech was the CBS Evening News in which anchor Scott Pelley described Obama as having “spoke[n] bluntly” about the deal, but properly noted the opposition to the deal in the latest CBS News poll: “[O]ur CBS News poll found that the President is facing an uphill battle. 20 percent of Americans approve of the plan, 33 percent disapprove, and 46 percent told us they don't know enough.”

The relevant portions of the transcript from August 5's NBC Nightly News can be found below. 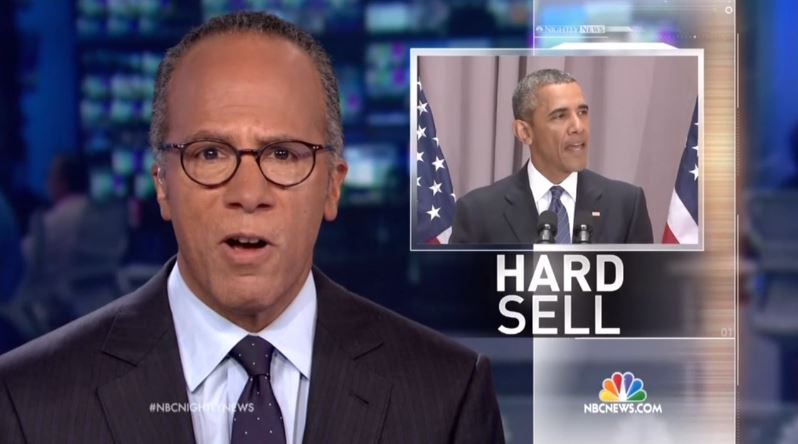 LESTER HOLT: The battle over the Iran nuclear deal grew even more intense today as President Obama gave a sweeping speech with fiery words for critics. There is one thing both sides do agree on, though. The upcoming congressional vote on the deal will be the most important foreign policy vote since the Iraq War. Our senior White House correspondent Chris Jansing has details.

CHRIS JANSING: President Obama on the attack, answering critics of the Iran nuclear deal with an impassioned, nearly hour-long defense.

PRESIDENT BARACK OBAMA: Congressional rejection of this deal leaves any U.S. administration that is absolutely committed to preventing Iran from getting a nuclear weapon with one option: another war in the Middle East.

JANSING: Speaking at American University, where JFK famously made the case for nuclear diplomacy –

JANSING: – Mr. Obama took sharp aim at his critics, saying they're the same people who argued for war in Iraq.

OBAMA: A mindset that exaggerated threats beyond what the intelligence supported.

JANSING: And he compared them to Iranian hardliners.

OBAMA: It's those hardliners chanting “death to America” who are most opposed to the deal. They've been making cause with the Republican caucus. 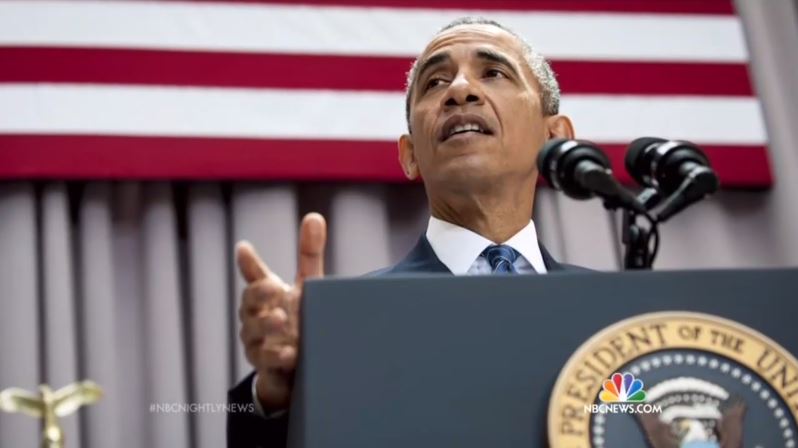 JANSING: A new NBC News poll shows the public evenly divided over the nuclear deal, but opposition has doubled just since June and with Congress facing constituents during the August recess, the President asked voters for help.

JANSING: Adding to the escalating debate, report tonight that satellite images show Iran cleaning up nuclear sites, destroying evidence. Opponents of the deal say it's proof Iran isn't to be trusted. The President has said the inspectors can detect past nuclear activity anyway.