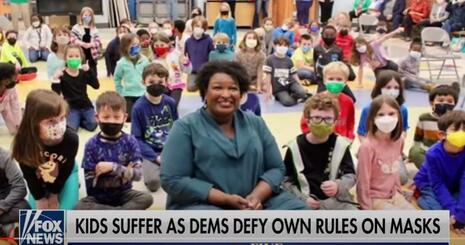 As even blue-state governors are doing an about-face on mask mandates, Wednesday’s New York Times front page buried the controversy over perennial Georgia gubernatorial candidate Stacey Abrams, a strong proponent of mask mandates, posing maskless in a sea of masked-up children and teachers, in a now-infamous photo.

The team of reporters Lisa Lerer, Luis Ferré-Sadurní and Astead Herndon, didn’t get to Abrams’ shameless, elitist mask hypocrisy until the last three paragraphs of the story, and then treated her lightly when they did so, avoiding Abrams’ hypocrisy, her pathetic counterattack that cited Black History Month as a defense, and the way in which she endangered, by her own strict masking standards, the health of children and teachers.

The paper continued on Wednesday to spread unsubstantiated (dare we say misinformation) statistics about the efficacy of masks and mask mandates, even though peer-reviewed studies proving the effectiveness of masks are non-existent.

In “With Mask Restrictions Set to Lift, a Haze of Uncertainty Lingers,” reporter Emily Anthes made the baseless assertion:

But a growing body of evidence -- from laboratory experiments to real world studies conducted around the world -- suggests that masking provides benefits in a variety of settings, including schools, scientists agreed.

The mask obsession continued. Polling writer Nate Cohn in Wednesday’s edition lamented “Americans Are Increasingly Frustrated With the Pandemic, Polls Show.” His first suggestion for stopping the spread wasn’t even vaccination, but instead was, you guessed it, masks, followed by social distancing.

Apparently, those societal concerns have not been enough to spur individuals to take action to check the pandemic. The Kaiser poll found that a majority of adults said they were no likelier to wear a mask, avoid large gatherings, get a vaccine or a booster shot as a result of Omicron.

Masks protect both the wearer from infection and those nearby from being infected. People who reported always wearing a mask indoors in public were less likely to test positive for the virus, according to a report released Friday by the Centers for Disease Control and Prevention. Two studies published in September by the C.D.C. -- which continues to recommend that children 2 and older wear masks at school and in day care -- also found evidence that masks help prevent in-school transmission.

Is that the best evidence there is? Tully didn’t question why the U.S. C.D.C. is the sole health body on earth to demand two-year-olds wear masks. She failed to report that the California “study,” the newest one and the first one cited and linked to above, was a dubious self-selected phone survey of Californians who got tested for COVID, with no laboratory aspect and too many potentially confounding factors to mention.

And the paper’s own David Leonhardt, a rare voice of Covid moderation at the paper, dismissed that same Arizona school study (Tully’s second link) in Wednesday’s edition as “largely debunked.”