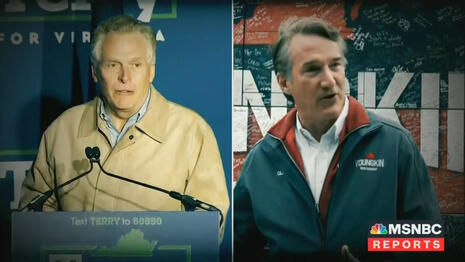 Beneath that somewhat pro-McAuliffe headline, Epstein actually conveyed some of the Democratic Party’s desperation in a state that Biden won by 10 last year. But the Times still portrayed the Republican as “weaponizing….racial issues” in public schools, as if it wasn’t liberals who are attempting to foist white guilt onto school children, in the form of Critical Race Theory:

In the final hours of campaigning on Monday to become Virginia’s next governor, it was Glenn Youngkin offering an optimistic vision for the future while Terry McAuliffe delivered harsh warnings about ghosts of the past.

As the two men barnstormed across the state, the contrast in tone demonstrated their shifting fortunes in the highest-profile race on the ballot on Tuesday. Mr. McAuliffe, a longtime fixture of the Democratic establishment, was scrambling to prevent President Biden’s unpopularity, the gridlock in Washington and Mr. Youngkin’s effective weaponizing of racial issues in the public schools from dooming his bid for a second term as governor.

Mr. Youngkin, for his part, was aiming to redefine how Republicans could win elections with former President Donald J. Trump out of the White House. He has accepted Mr. Trump’s support and has abstained from criticizing him, but Mr. Youngkin has kept Mr. Trump from visiting Virginia and never invokes his name during his stump speeches….

Epstein’s descriptions of the educational issues are incomplete.

On Monday, in the Richmond area, Mr. Youngkin said he would lead a sweep of Republican victories across the state that would define a new era for the party -- one that he has centered on giving parents greater control over the curriculum in public schools, particularly in how children are educated about racism.

“We will not teach our children to view everything through the lens of race,” Mr. Youngkin told supporters at a midday rally in an airplane hangar. “So on Day 1, I will ban critical race theory from Virginia’s schools.”

That theory, a graduate-level academic framework that argues that historical patterns of racism are ingrained in law and other modern institutions, is not taught in Virginia’s public schools. But conservatives have turned it into a flash point in key suburban areas such as Loudoun County, just outside Washington.

Despite what the media tell you, Virginia educators are in fact immersed in Critical Race Theory. Dan McLaughlin explained at National Review Online:

At the core of the defense by Democrats and their pundit class in the controversy over critical race theory and other forms of the same basic ideology in Virginia schools is denial that any such thing has anything to do with public schooling in Virginia.

He also pointed to the Virginia Department of Education’s “EdEquityVA” website page on “Anti-racism in Education” (emphasis in original).

Drawing from critical race theory, the term “white supremacy” also refers to a political or socio-economic system where white people enjoy structural advantage and rights that other racial and ethnic groups do not, both at a collective and an individual level.