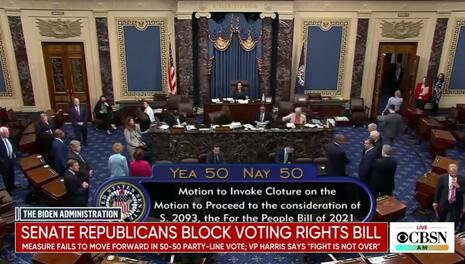 The Democrats’ all-encompassing “voting rights” bill, the so-called For the People Act, formally known as H.R.1, is dead in Congress for now. The New York Times lead story on Wednesday by Nicholas Fandos explained: “G.O.P Blockade in Senate Thwarts Voting Rights Bill – After 50-50 Tie, Democrats Pin Their Hopes on a Push to Abolish the Filibuster.”

The Times loved the Democratic Party’s vast electoral takeover attempt and constantly pushed for the bill's passage, while excoriating voter integrity measures at the state level by the Republican Party as racist and un-American.

Republicans on Tuesday blocked the most ambitious voting rights legislation to come before Congress in a generation, dealing a blow to Democrats’ attempts to counter a wave of state-level ballot restrictions and supercharging a campaign to end the legislative filibuster.

He lamented “the restrictive voting laws racing through Republican-led states” while admitting the Democrats in Congress were running out of options.

In their defeat, top Democrats appeared keen to at least claim Republicans’ unwillingness to take up the bill as a political issue. They planned to use it in the weeks and months ahead to stoke enthusiasm with their progressive base by highlighting congressional Republicans’ refusal to act to preserve voting rights at a time when their colleagues around the country are racing to clamp down on ballot access.

Yet now that the fight is over, Times reporters seem freer to point out the fatal flaws of the Democrat’s hodge-podge of a bill:

Democrats’ [sic] bill, which passed the House in March, would have ushered in the largest federally mandated expansion of voting rights since the 1960s, ended the practice of partisan gerrymandering of congressional districts, forced super PACs to disclose their big donors and created a new public campaign financing system.

At more than 800 pages, the For the People Act was remarkably broad. It was first assembled in 2019 as a compendium of long-sought liberal election changes and campaign pledges that had energized Democrats’ anti-corruption campaign platform in the 2018 midterm elections….

Here’s an admission you didn’t see before today:

When Democrats improbably won control of them, proponents insisted that what had essentially been a messaging bill become a top legislative priority. But the approach was always flawed. Mr. Manchin did not support the legislation, and other Democrats privately expressed concerns over key provisions. State election administrators from both parties said some of its mandates were simply unworkable…

But it was a flawed bill that had little chance of testing the limits of what if anything is still possible in Washington….The law, known as H.R. 1 or S. 1, was full of hot-button measures -- from public financing of elections to national mail voting -- that were only tangentially related to safeguarding democracy, and all but ensured its failure in the Senate….

Jonathan Weisman’s news analysis admitted the legislation was “breathtaking in its scope.”

With the fight over, the Times could finally reveal the true scope of the anti-democratic measures the Democrats were trying to push, and inconvenient truths like the fact that voter identification rules are extremely popular among both Democrats and Republicans.