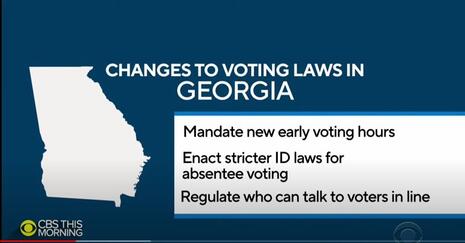 As President Biden demonstrated at his first press conference, it’s once again cool to call your political opponents “un-American" and, better yet, The New York Times won’t accuse you of questioning your opponent’s patriotism, but will boast of the smear in approving front-page headline. And speaking of headlines, The Times will do anything to defend the far-left For the People Act while bludgeoning pushback from Republicans as racist for having other ideas.

In Friday’s Times’ lead slot, the banner headline came out of President Biden’s first-ever press conference after he smeared the Georgia election legislation as racist: “Biden Laces Into G.O.P. On ‘Un-American’ Bids To Limit Voting Rights.” It's clear The Times didn't (and still doesn't) care about doing their homework (with stories like here and here serving as strong alternatives).

Under that banner, reporter Nick Corasaniti again painted the Georgia legislation in a sinister light: “Georgia Republicans Pass Broad Curbs on Ballot Access.” The jump-page headline wasn't any better: “Georgia Republicans Pass Broad Voting Restrictions As Critics Cite ‘Jim Crow.’” In bold on that same page was this quote from a Democratic state senator: “‘It is like a Christmas tree of goodies for voter suppression.”

Reporter Nicholas Fandos defended the For the People Act under the headline attacking Republican opposition with “Divisions and False Claims at Hearing,” which included this blurb:

It was the start of an uphill battle by Senate Democrats, who have characterized what they call the For the People Act as the civil rights imperative of modern times, to overcome divisions in their own ranks and steer around Republican opposition to shepherd it into law. Doing so may require them to change Senate rules to eliminate the filibuster, once used by segregationists to block civil rights measures in the 1960s.

The filibuster was also used by those well-known racists Barack Obama and Joe Biden himself back when they were senators. Now they both claim the filibuster is (again) a “Jim Crow relic.”

Corasaniti also reported under an unflattering, Stacey Abrams-like headline on Thursday’s front page that the “G.O.P. Aims to Seize State Ballot Levers” and this misleading jump-page headline: “To Keep Grip on Power, State Republicans Push For Control of Elections.”

Corasaniti set it up to sound sinister (click "expand"):

In the turbulent aftermath of the 2020 presidential contest, election officials in Georgia, from the secretary of state’s office down to county boards, found themselves in a wholly unexpected position: They had to act as one of the last lines of defense against an onslaught of efforts by a sitting president and his influential allies to overturn the will of the voters.

Now state Republicans are trying to strip these officials of their power.

Buried in an avalanche of voting restrictions currently moving through the Georgia Statehouse are measures that would give G.O.P. lawmakers wide-ranging influence over the mechanics of voting and fundamentally alter the state’s governance of elections. The bill, which could clear the House as soon as Thursday and is likely to be passed by the Senate next week, would allow state lawmakers to seize control of county election boards and erode the power of the secretary of state’s office.