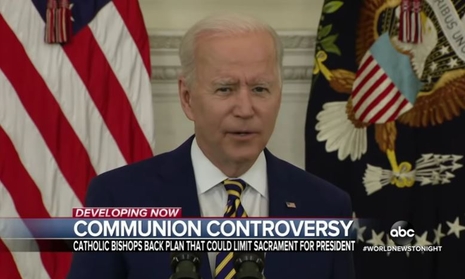 On the front page of Monday’s New York Times, religion reporters Elizabeth Dias and Ruth Graham joined up for “Bishop’s Vote Against Biden Reveals Reach.” The online headline got to the point: “In Rift With Biden, a Dramatic Show of Force by a Conservative Catholic Movement.”

Give points to Dias and Graham for bringing on conservative Catholic voices, but the lead in particular was spectacularly wrongheaded:

Pope Francis and President Biden, both liberals, are the two most high-profile Roman Catholics in the world.

As if the pro-choice American President Joseph Biden is some kind of church figure charged with determining church doctrine.

After that, the most striking thing in the piece was the obsessive “conservative” labeling tic. A few examples follow.

That reality was unmistakably declared last week, when the country’s bishops voted overwhelmingly to draft guidelines for the Eucharist, advancing a conservative push to deny Mr. Biden communion over his support for abortion rights.

It was the most dramatic example of the conservative Catholic movement’s reach since Mr. Biden was elected. But the contingent had been gaining strength throughout the Trump era, clashing with the Vatican, wresting influence away from Pope Francis’ top representatives in the United States and further polarizing the Catholic faithful in the process. And now, American Catholics are facing an internal war over one of the church’s most sacred rituals, the Eucharist, which represents the body and blood of Christ.

The rightward shift comes as conservative movements are rising in Christianity, pushing back against increasing secularism and the overall decline of Christianity, both Protestant and Catholic. The sex abuse crisis has also pushed many parishioners away from the church.

Pope Francis, the first pontiff from Latin America, has taken on the rising conservatism in the United States, especially in public clashes with Mr. Trump on racism, immigration and what it means to be a true Christian.

The bishops’ conference, held virtually last week, revealed a network of conservative church strongholds across the country, as bishop after bishop presented himself as a defender of the true faith, often in the face of what they described as persecution from liberal Christians, secular society and the news media.

Heroes of the Catholic right, including bishops long known for their ardent opposition to gay rights and contraception, were among the statement’s most prominent supporters.

Now, in the early months of the Biden administration, the bishops’ actions have newly emboldened the conservative grass roots. CatholicVote, a conservative political group, began fund-raising off the decision within hours.

In case you missed the point, these anti-Biden Catholics sure are conservative. The Times gave room to an obnoxious Democratic politician:

Mr. Lieu, in a series of tweets after the bishops’ vote, had called them “hypocrites” for not instructing former attorney general William P. Barr to abstain from the Eucharist because of his employment of the death penalty when he served under Mr. Trump….

The issue of abortion is considered a grave evil by the church. The church opposes the death penalty but allows it in occasional cases.

Conservatives voices were given space.

Ryan T. Anderson, the president of the Ethics and Public Policy Center, a conservative organization in Washington, said that bishops taking action on a contemporary political issue was simply a matter of obedience to church teaching, regardless of partisanship.

But the story ended on a ridiculous note, with a Mass-attending Catholic whose husband works for the abortion mill Planned Parenthood was worried she may no longer be allowed to take the Eucharist:

The bishops’ vote last week could lead to a slippery slope “where eventually Catholics like me are going to be excluded,” [Emily] Holtzclaw said. But partaking of the sacrament on Sunday morning had strengthened her resolve to remain faithful to the tradition that she loves.

“They’re going to have to take it away from me,” she said.