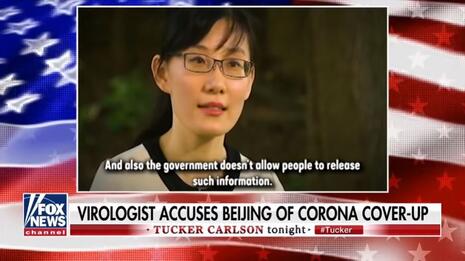 The New York Times finally updated its irresponsible reporting on an idea it notoriously “debunked” just two months ago – the possibility that the coronavirus really could have originated in a lab in Wuhan, China, as opposed to from a bat in a Wuhan “wet market."

Much of the paper’s mockery focused on allegations by Li Meng Yan, a virologist from Hong Kong, who claimed the virus was a man-made Chinese bioweapon. The Times and the rest of the media mocked not only that theory, but also dismissed a less dramatic possibility -- that the coronavirus could have been studied in the Wuhan lab when it escaped.

Such a scenario seems more likely after a letter penned by 18 scientists ran in the journal Science, calling for a further investigation. There was also a comprehensive May 2 analysis from former Times science reporter Nicholas Wade, and another by another former science reporter, Donald McNeil: “Why the Covid-19 'Lab Leak Theory' Needs Another Look,” each giving credence to the formerly “fringe” idea the virus may have escaped a lab in Wuhan.

After long smearing the pro-Trump advocates of the position as ignorant and even anti-Asian (even though an Asian virologist was among the most prominent people making the claim), the Times offered a short follow-up story (perhaps online only) that failed to acknowledge the paper’s smug claim in March 2021 that the “lab” hypothesis had been “debunked.”

The full headline to the May 13 story by James Gorman and Carl Zimmer: “Another Group of Scientists Calls for Further Inquiry Into Origins of the Coronavirus -- Researchers urge an open mind, saying lack of evidence leaves theories of natural spillover and laboratory leak both viable.”

This was the only hint of the paper’s previous smug certitude:

Previous statements from other scientists and the W.H.O. report both asserted that a natural origin was by far the most plausible.

Here is how the Times previously dismissed the theory.

Intelligence agencies have been skeptical that the pathogen can be conclusively linked to a lab. Scientists who have studied the genetics of the virus agree that it began as a bat virus and likely evolved to jump to humans. Many have dismissed theories that the virus infected researchers in a lab accident.

As recently as March 2021, the Times blamed the theory for anti-Asian violence (never mind the lab theory came from an Asian researcher): “Anti-Asian Online Posts Helped Set the Stage For Real-World Violence.”

In October 2020, Katherine Wu wrote confidently that “Another ‘Unfounded’ Study on Origins of Virus Spreads Online.”

An overwhelming body of evidence continues to affirm that the coronavirus almost certainly made its hop into humans from an animal source -- as many, many other deadly viruses are known to do.

But since the early days of the pandemic, experts have had to fight to combat misinformed rumors that the coronavirus emerged from a lab as part of a sinister scientific project.

The claims that the virus was created or modified intentionally in a lab were dismissed by scientists and U.S. intelligence officials. The Office of the Director of National Intelligence in the Trump administration concurred “with the wide scientific consensus that the Covid-19 virus was not man-made or genetically modified.”

And the Chinese Communists wouldn’t lie, would they?

The Chinese government, prominent Chinese scientists and many virologists, who study the evolution of viruses and the appearance of infectious diseases, have said the lab leak theory was very unlikely, citing genetic evidence and the many opportunities for natural infection in human interactions with animals like bats, where the virus is believed to have originated.

The question remains: Why were the mainstream media so eager to absolve the Chinese Communist Party, which hardly has a sterling record of honest dealings and veracity?