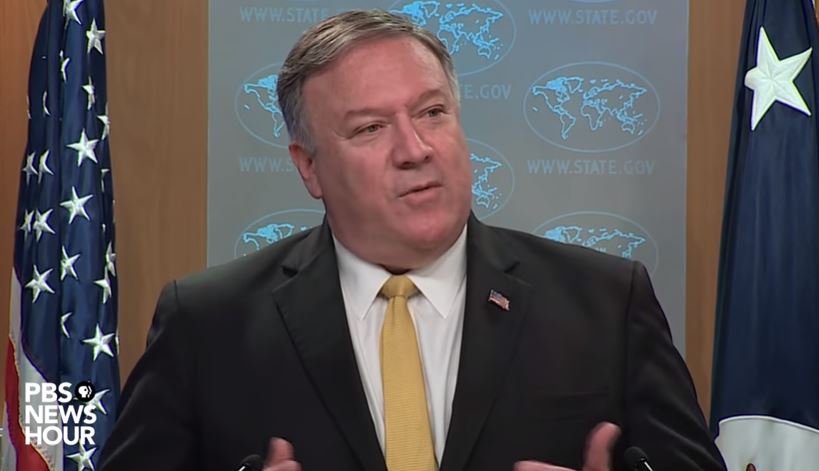 The New York Times wrung its hands over Secretary of State Mike Pompeo’s review of the U.S. government’s international human rights policy, using his Christian faith against him while using the most liberal definition of human rights to try and paint the Trump administration as reactionary and anti-gay: “New Human Rights Panel Spurs Misgivings.”

Tuesday’s report by Edward Wong and Eileen Sullivan began with subtle warnings that the paper did not approve of the new mission, or of Pompeo getting his faith intertwined with the administration's policy positions.

Secretary of State Mike Pompeo announced Monday that he was installing a human rights advisory panel in the State Department, and named a conservative law professor as its chairwoman, to review and tighten the agency’s definition of human rights and ensure it is grounded in the “nation’s founding principles” and a 1948 United Nations declaration.

The State Department already houses an internal bureau that oversees human rights issues. But the new panel, which Mr. Pompeo said would examine “the role of human rights in American foreign policy,” will not be managed by the bureau and was created without substantial input from its experts and officials.

The announcement, along with a blunt commentary by Mr. Pompeo that was published in The Wall Street Journal on Sunday, raised worries among human rights advocates and Democratic lawmakers that Mr. Pompeo is moving to curtail State Department advocacy for some rights, particularly ones related to women’s health and reproduction and gay and transgender issues.

But the paper was only able to paint such a grim picture for gay rights by ignoring the administration’s call for decriminalization of homosexuality overseas, a liberal stand the Times has bizarrely tried to denigrate.

Mr. Pompeo is an evangelical Christian who is open about how his religious beliefs help shape actions and policies. In March, Mr. Pompeo said the United States would withhold funding from foreign nongovernmental organizations that give money to foreign groups that perform abortions. The announcement was an expansion of a 2017 administration announcement that reinstated an anti-abortion policy from 1984 that critics call the “global gag rule.”

Some American diplomats say there has already been a rollback of gay rights advocacy at the State Department. Last month, officials in Washington told some American embassies not to fly gay pride flags after diplomats had asked to do so. By contrast, in 2011, Hillary Clinton, then secretary of state, proclaimed in a speech that “gay rights are human rights.”

Here the paper is guilty of elevating symbolism, while skipping how Barack Obama (in whose administration Clinton served) claimed himself opposed to gay marriage during his successful 2008 campaign (opposition was also Hillary Clinton’s official stance during her failed 2008 campaign).

Another ideological label for professor Mary Ann Glendon (the paper rarely if ever labels liberal professors):

Mr. Pompeo said the new panel, called the Commission on Unalienable Rights, would be led by Mary Ann Glendon, a conservative Harvard Law School professor and former ambassador to the Vatican. She said the panel had been asked to examine principles, not policy.

The Trump administration is being widely criticized for human rights abuses related to the poor conditions under which immigrants are being held in federal detention centers near the border between the United States and Mexico. Critics also point to, among other things, President Trump’s steadfast support for Crown Prince Mohammed bin Salman of Saudi Arabia and President Vladimir V. Putin of Russia, both accused of rampant human rights violations.

A March 2019 “news analysis” from Wong, “The Rapture and the Real World: Pompeo Mixes Beliefs and Policy” warned in the text box that Pompeo was “A diplomat who says the Bible ‘informs everything I do.’”