NYT’s Page One Tries to Dissuade ‘Incendiary...Hard-Right’ Blackburn From Her Pro-Life Views 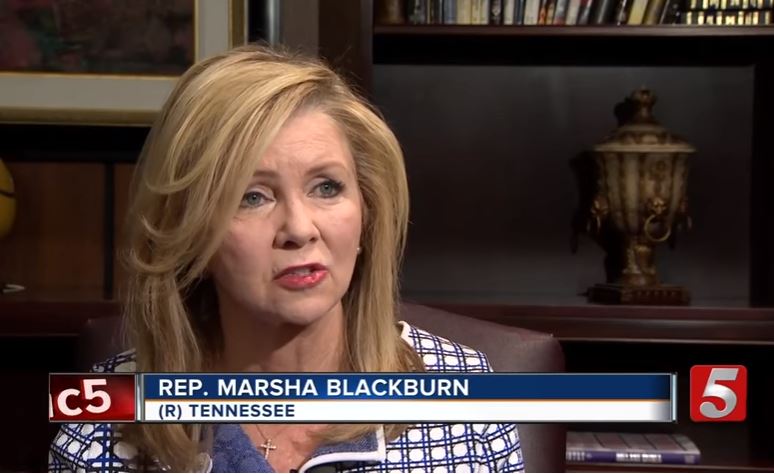 The New York Times, which is always eager to help Republican candidates, insisted that Marsha Blackburn would be making a tactical error in emphasizing her pro-life bona fides as the GOP’s candidate for U.S. Senate in Tennessee. The front-page report by Elizabeth Dias in Monday’s edition blared: “In Senate Bid, Abortion Foe Changes Topic.”

Last month Dias embraced identity politics by celebrating Rashida Tlaib’s Democratic primary victory in Detroit. But the paper’s support for women only goes only to those with a “D” before their name, and Dias’s sympathies on Monday appeared to run against Blackburn and toward her white male Democratic opponent. Tennessee Gov. Phil Bredesen.

Inside the Kingsport Chamber of Commerce one morning last month, a few dozen voters sipped coffee and listened for 45 minutes to Representative Marsha Blackburn tick off all the reasons that this traditionally Republican stronghold in northeastern Tennessee should support her in one of the most high-stakes Senate races this year.

She praised President Trump. She warned of an invasion of liberal policies and a Democratic takeover of committees if Republicans lose the Senate. She stressed securing the border, fighting MS-13 and lowering taxes. She highlighted her work as a Republican House member to “get government off your back.”

But one issue was entirely absent -- the one that had made Ms. Blackburn famous in Washington, and infamous in Democratic circles: abortion.

Dias really bore down on hostile labeling, and went so far as to suggest Blackburn risked the lives of doctors.

Even as the Supreme Court confirmation hearings for Judge Brett M. Kavanaugh have pushed Roe v. Wade to the forefront of American politics, Ms. Blackburn has largely relegated abortion to the background as she campaigns for the seat being vacated by Senator Bob Corker. Like other hard-right Republicans -- including Brian Kemp, the candidate for governor in Georgia -- she is adopting a broader platform, supporting Mr. Trump’s national agenda while focusing on statewide issues important to voters.

It’s a noticeable shift for a politician who three years ago took an incendiary turn in the nation’s culture wars. Amid a divisive battle over the funding of Planned Parenthood, Ms. Blackburn led a congressional committee investigating allegations that the group had tried to illegally profit from the sale of fetal tissue, which the organization denied. Ms. Blackburn fanned the flames by making the audacious charge that the group was selling “baby body parts on demand.”

It was a particularly ugly chapter in a bitter national debate, with abortion rights activists claiming that the threat of subpoenas from Ms. Blackburn’s committee could set back medical research efforts and endanger the lives of doctors and scientists if their names became public. At the same time, abortion opponents earned grass-roots support during the pivotal presidential primaries.

But while Ms. Blackburn’s fierce opposition to abortion rights may have helped her in her deeply Republican district over the years, successful G.O.P. Senate candidates running statewide in Tennessee -- like Lamar Alexander, Fred Thompson, Bill Frist and Mr. Corker -- have not been so hard-edged and fiery.

Both Ms. Blackburn and her Democratic opponent in November, the moderate former governor Phil Bredesen, are stressing business credentials in a state where pragmatic, pro-business ideology has long prevailed.

A recent loss by another Tennessee Republican may have provided a cautionary tale for Ms. Blackburn. Representative Diane Black, who has called family planning “family destruction,” and who helped lead the successful campaign to amend the state’s constitution to remove any right to abortion, lost the Republican primary for governor last month -- a sign that strong anti-abortion positions may not be enough to win statewide.

Tennessee’s three current leaders -- Mr. Corker, Mr. Alexander and Governor Bill Haslam -- are known as pragmatists, not firebrands, and many conservatives in Tennessee fall into that group.

Dias tried to wave Blackburn off the abortion issue.

Mr. Bredesen’s record makes it difficult to use abortion as a political weapon against him. As governor, he allowed a measure for an anti-abortion license plate to become law, and the ACLU retaliated with a lawsuit.

The abortion issue does not resonate as a top political priority for some prominent traditionally Republican donors.

Thomas Cigarran, a principal owner of the Nashville Predators hockey team, has previously donated to Republicans, including Mr. Corker and Mitt Romney, but he will host a fund-raiser for Mr. Bredesen at his home later this month. He said he and other Republicans are looking for a pragmatic and bipartisan leader, not an ideologue.

Many anti-abortion supporters in Tennessee also have a slew of additional political priorities.