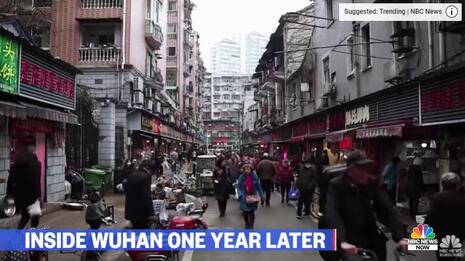 Wokester reporters at the New York Times forced out its editorial page editor this summer after he published an op-ed by Republican U.S. Senator Tom Cotton that called for military help in quelling street riots. Yet it’s perfectly happy to prominently feature Chinese Communist propaganda from its own staffers suggesting China’s brand of authoritarianism is the wave of the future. But don’t expect any backlash from the paper’s “woke” staff: No enemies to the left!

Tuesday’s Times featured Li Yuan’s “The New New World” column “Freedom Through a Chinese Looking Glass – In a world knocked sideways by pandemic, autocratic China, where the virus has been contained, appears enviably free.” The “column” rubric is a misnomer, because it’s smack on the front page of the Business Day section.

She opened on a businessman “[sighing] with relief” that “He was headed to China,” with enviably low infections. He felt “safe, energized and free.”

While many countries are still reeling from Covid-19, China -- where the pandemic originated -- has become one of the safest places in the world. The country reported fewer than 100,000 infections for all of 2020. The United States has been reporting more than that every day since early November.

A journalist really should know better than to take a Communist dictatorship’s reporting as fact, or to downplay freedom of speech.

The pandemic has upended many perceptions, including ideas about freedom. Citizens of China don’t have freedom of speech, freedom of worship or freedom from fear -- three of the four freedoms articulated by President Franklin D. Roosevelt -- but they have the freedom to move around and lead a normal day-to-day life. In a pandemic year, many of the world’s people would envy this most basic form of freedom.

The global crisis could plant doubts about other types of freedom. Nearly half of voting Americans supported a president who ignored science and failed to take basic precautions to protect their country. Some Americans assert that it is their individual right to ignore health experts’ recommendations to wear masks, putting themselves and others at increasing risk of infection. The internet, which was supposed to give a voice to the voiceless, became a useful tool for autocrats to control the masses and for political groups to spread misinformation.

Only then did the obvious criticism come. Still there was not a single mention of the concentration camps filled with Muslims.

China’s freedom of movement comes at the expense of nearly every other kind. The country is about the most surveilled in the world. The government took extreme social-control measures at the beginning of the outbreak to keep people apart -- approaches that are beyond the reach of democratic governments.

“There are actually a lot of parallels between how the Chinese government treats a virus and how they treat other problems,” said Howard Chao, a retired lawyer in California who invests in start-ups on both sides of the Pacific.

But any flare of criticism of the Chinese government was quickly stamped out.

Of course, the Chinese government is eager to help the world forget that it silenced those who tried to warn the world in the early days of the outbreak.

But there’s no denying that China’s success in containing the outbreak burnished Beijing’s image, especially when compared with the failures of the United States. It has given currency to the so-called China model -- the Communist Party’s promise to the Chinese public that it will deliver prosperity and stability in exchange for its unrelenting grip on political power.

“In this year of pandemic, the Communist Party has provided the public a social good: stability,” said Dong Haitao, an investor who moved to Beijing from Hong Kong in August.

And how did China contain the outbreak? Yuan leaves that blank, but one tool in its authoritarian arsenal is locking people in their homes, and that's not just metaphorical.

It isn’t clear whether this shift in perception can be sustained after the pandemic ends. But the West may find it has to work harder to sell its vision of freedom after China has made its model seem so attractive.

Yuan hasn’t always been so eager to carry the regime’s water. An April 2020 column by Yuan provided some welcome counterpoint to the Times’ sickening impulse to believe the Chinese Communist Party’s propaganda: “China's Coronavirus Propaganda Stirs Anger Toward the U.S.”