The New York Times has openly relished ripping down and vandalizing statues, as demonstrated by the full-page photo essay on the front of the Friday National section under the suspiciously celebratory headline “Dumped, Painted, Toppled, Boxed Up and Hoisted Away.” 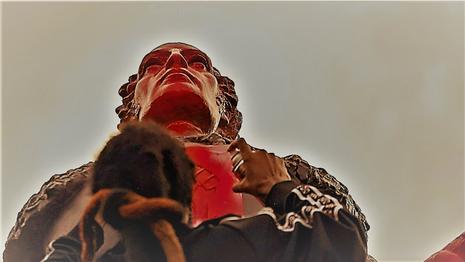 The statues have stood for more than a century in some places. Some are cast in bronze, others carved in stone. And all over the world, as protests against racism and police violence have renewed attention on legacies of injustices, people have been asking: Does this statue still need to be here?

The answer from some protesters has been a resounding no.

In England, a 17th-century slave trader was dumped into Bristol Harbor. In Antwerp, a Belgian king who brutalized Congo was burned and ultimately removed. And in the United States, more than a dozen statues have been toppled, including several Confederate figures.

In dozens more cities, those that still stand have been marked with graffiti, challenged anew with petitions and protests, or scheduled for removal.

Here’s a look at what’s happened to some of them.

Interestingly, the paper led off with a racist newspaper publisher. But the bit on Confederate General Robert E. Lee’s statute in Richmond, Va. included no mention of Democratic Gov. Northam’s own past donning of racist imagery.

Gov. Ralph Northam of Virginia, a Democrat, has ordered the removal of the statue under a new state law that goes into effect on July 1, which will allow cities to decide for themselves the fates of such monuments. (A judge later blocked the removal.) ...

The nihilism has embraced such historical figures as Christopher Columbus and...a prototype of a Texas Ranger?

In Dallas, construction crews recently removed a 12-foot-tall bronze statue of a Texas Ranger, long seen as a mythical figure in state folklore, amid concerns over historical episodes of police brutality and racism within the law enforcement agency. It had stood in the main lobby of the city’s Love Field airport since 1963.

A “Political Memo” by Maggie Haberman and Jonathan Martin only briefly mentioned the destruction of statues of Washington and Grant, and then did so in an oddly sideways fashion to criticize Trump.

But Mr. Trump has been unwilling to spotlight the destruction of statues dedicated only to broadly popular figures, such as George Washington and Ulysses S. Grant. His inclination on race is always to reach for the most incendiary rhetoric, lest his supporters miss the point.

A nytimes.com search indicates the paper hasn’t run full stories on the destruction or removal of statues of Grant or Washington or Thomas Jefferson, making only brief mentions in longer stories. The paper did note a debate over the impending removal of a statute grouping including Abraham Lincoln, but avoiding putting “Lincoln” in the print headline: “National Debate Swells Over Ambiguous Statue.”

In 2011, the Times suggested ripping down a Saddam Hussein statue in Iraq was not a newsworthy event, yawn.