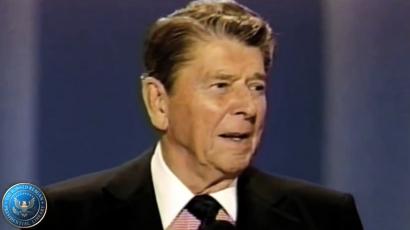 In “Reconciling the Pandemic With the Nation’s Self-Image,” her left-wing essay disguised as news in Wednesday’s New York Times, culture reporter Jennifer Schuessler used an ill-concealed gloating tone, as if the pandemic, which caught the whole world (except China) off guard, is the final blow to naive Reaganesque pride in American uniqueness.

She even quoted a liberal historian attacking America for being in the thrall of Ronald Reagan.

But first, there was this:

“It can’t happen here” is an enduring refrain in American culture, a reflection of the idea -- whether invoked ironically or in earnest -- that the United States has a special destiny, and stands apart from the forces shaping the rest of the world.

Now, with a devastating global pandemic definitely happening here, much of the nation is asking how and why and what it means that a country that sees itself as the world’s wealthiest, most powerful and most scientifically advanced leads the world in both cases and confirmed deaths.

....for some, the severity of the crisis...has also upended their conception of the country, shattering the already battered idea of American exceptionalism, if not turning it on its head.

Such analogies also underline the idea of American specialness -- that we are under attack, as the post-Sept. 11, refrain went, “because of who we are.” But an attack by pathogens resists that same kind of self-flattering narrative....

Notice the statistical sleight of hand in the next paragraph. Schuessler previously cited raw figures of the U.S. death toll to bash Trump's response. But to bash American ethnocentrism, she suddenly switches to a per capita measure, which makes America’s coronavirus problem look relatively less deadly than Europe's (and Trump's response better, though the Times would never admit that part).

Even references to America as the “epicenter” of the crisis, when per capita death rates in many other countries, including a number in Western Europe, are higher, Ms. Gessen said, reflects a wrongheaded frame.

(Schuessler is the latest Times reporter to use the coronavirus to push left-wing politics.)

The idea of American exceptionalism is a squishy but durable concept....For the mid-20th-century scholars who developed the concept, it referred to the fact that the United States, alone among the wealthy Western nations, never had a working class party, or developed the kind of welfare state and safety net that exist in most European countries.

Only once did she hint at the ideological aspect of her argument, before bashing “the American myth of rugged individualism.”

The idea of American exceptionalism has long been in ill repute among critics on the left....But others see the crisis as the outgrowth of an exploitative system that leaves everyone fending for themselves.

After quoting a historian who wrote a textbook supposedly “intended as a conservative riposte to authors like Howard Zinn,” she concluded with liberal professor David Kennedy, who required no ideological label when he said, "For the last 40 years in this country, we’ve been in thrall to the kind of message Ronald Reagan delivered in first inaugural: Government is the problem, not the solution...."