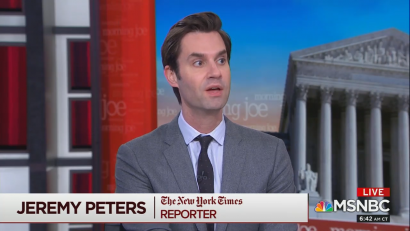 New York Times reporter Jeremy Peters is still waging attacks on conservatives in the time of coronavirus. On Tuesday’s front page, Peters devoted 1,700 words to “A Culture War Is Simmering in Quarantine,” deriding conservative protests over oppressive state restrictions while framing (unlabeled) liberal politicians and activists as founts of wisdom and sweet reason.

Peters’ word choice made it clear whose side he’s on.

This is what it looks like when a pandemic collides with the culture wars in America.

The mayor of Louisville, Ky., warned churches that holding services on Easter Sunday would defy the city’s social distancing guidelines. Mitch McConnell, the Kentucky Republican and Senate majority leader, answered with a stern letter, arguing, “Religious people should not be singled out for disfavored treatment.”

The Democratic governor in Michigan extended bans on certain outdoor activities to include using motorboats. Conservatives called her an authoritarian and caricatured her move as a slap at people who enjoy the outdoors. “You can’t go fishing,” a local activist lamented in an interview on “Fox & Friends.”

For now, Mr. Trump is speaking to the minority of Americans who believe the government has gone too far in trying to contain the threat from the virus. And he is doing so by spreading misinformation and innuendo about how the restrictions affect issues like gun ownership and freedom of worship....

Pointing to a recent survey from the right-leaning American Enterprise Institute that found nearly 90 percent of houses of worship in the country were no longer offering services as usual....

He offered no ideological label for the pro-abortion Center for Reproductive Rights or the ACLU, both of whom are suing “conservative” Texas.

Peters disdained the Trump-centric nature of some rallies while getting in a drive-by fact-check at Sean Hannity.

One man who also attended the protest held a sign that read “Facts not fear,” a variation of the saying that Sean Hannity uses on his radio and Fox News programs -- “Facts without fear” -- to leave his fans with the false impression that they are getting the truth and nothing but.

Peters concluded with a crack at the “overwhelmingly white” protests and emphasized that the virus is hitting blacks hard (the paper has tried to make a racial issue out of the protests). He even linked a Kentucky protest to a rise in state coronavirus cases.

The people at these protests have been overwhelmingly white. And while the coronavirus can strike people of any race, nationality, religion or political persuasion, data shows it is infecting and killing black people in the United States at disproportionately high rates.

Its spread also appears to be worsening in some of the states where the protests have taken place. In Kentucky.... Andy Beshear, officials reported a sobering development on Monday.

The state recorded its highest number of new coronavirus cases yet in a single day: 273.