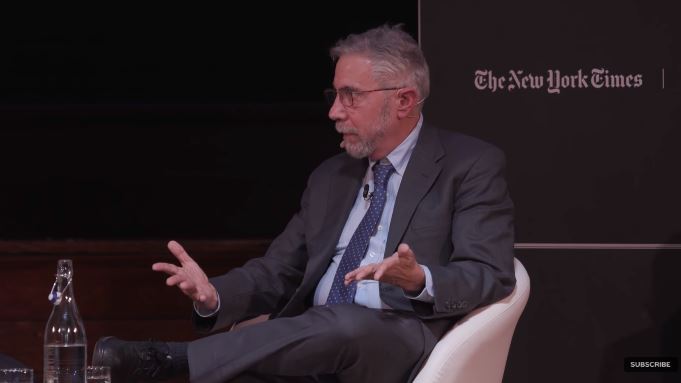 New York Times columnist Paul Krugman, respected economist turned classless Democratic hack, demonstrated his unseemly willingness to politicize crises, in his Tuesday column “Paranoid Politics Goes Viral.” The text box: “When everything is a liberal media conspiracy.” From there he went after “right-wing” media and politicians.

We still don’t know how much damage Covid-19 – the coronavirus disease – will do, but it’s reasonable to be very concerned. After all, it appears to be highly transmissible, and it is probably a lot more lethal than ordinary flu.

But not to worry, say right-wing pundits and news organizations: It’s all a hoax, a conspiracy by the liberal media to make Donald Trump look bad. Administration officials and Trump himself have echoed their claims.

Krugman is spreading a lie above; Trump never said the coronavirus was a hoax.

This craziness was, however, entirely predictable to anyone who has been following right-wing politics. It’s just the latest battle in a long-running war on truth, on the very idea that there exists an inconvenient objective reality.

Krugman did snipe briefly at Bernie Sanders (he’s never been a Bernie fan):

Now, this kind of conspiracy theorizing isn’t exclusively the province of the right. You can, for example, see some similar tendencies in Bernie Sanders’s team....

Krugman then moved back to his usual position, attacking the “paranoid style” of the right, which “can be deadly,” while shoehorning "climate change" into the conspiratorial mix.

This is obvious when it comes to climate change, where conspiracy-theory-fueled denial plays a big role in blocking action, and hence poses an existential threat to civilization.

One of those “existential threats” is....noting liberal media bias?

In today’s case, analysis was skewed toward not seeing a threat -- and the skew was enabled, in part, by claims that all the evidence that there was, indeed, a threat was a hoax perpetrated by the liberal news media.

It’s true that Democrats are criticizing Trump’s actions, suggesting that his refusal to accept responsibility for, well, anything is putting America at risk. Last time I checked, however, criticizing America’s leaders was still legitimate.

But that’s the thing about political paranoia: You see even the most normal criticism as part of a sinister conspiracy. And the fact that this kind of paranoia has infected our ruling party is scarier than any virus.

This is far from Krugman’s first nasty foray into politicizing national emergencies. Three days after the horror of 9-11, he saw a bright side -- a gruesome take on the “broken window” hypothesis: “Now, all of a sudden, we need some new office buildings.” Krugman continues to offend regarding 9-11 on an anniversary basis.

He used the shooting of Rep. Gabrielle Giffords to falsely attack Republicans as responsible, and turned the 2015 massacres in Paris by radical Islamists into personal attacks on Republicans.