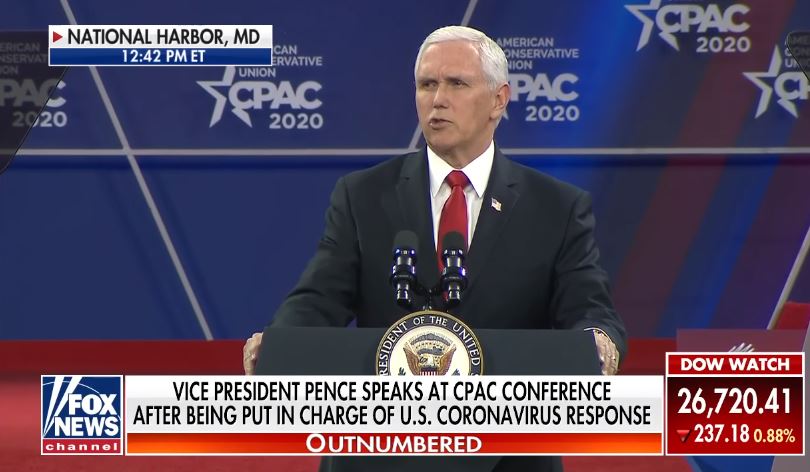 Continuing to politicize the coronavirus, the New York Times Abby Goodnough on Friday attacked President Trump putting Vice President Mike Pence in charge of the coronavirus task force in “Trump Said Pence Had ‘Talent’ on Health Policy. A Review of His Record.”

So what does Mr. Pence’s record on health care look like? He has no training or expertise in health policy. Paradoxically, the two health initiatives that he got the most attention for in Indiana are actions that many in the Republican Party have strongly opposed.

In 2015, he was one of the first Republican governors who agreed to expand Medicaid under the Affordable Care Act, a move that others in his party have shunned because of their opposition to the law.

That same year, he allowed -- albeit reluctantly -- a program to provide clean needles for intravenous drug users in a rural county that was in the throes of an HIV outbreak.

But while his decision allowed such exchanges to open statewide, no state funding was made available for them. More broadly, critics said that Mr. Pence, like previous Indiana governors, had failed to invest adequately in public health.

She even made an unrelated assault on Pence’s pro-life stance.

As a member of Congress from 2001 to 2013, his deep opposition to abortion led him to initiate efforts to strip federal funding from Planned Parenthood. A Planned Parenthood clinic had been the only place for HIV testing in Scott County, where the outbreak took place. It closed in 2013, largely due to cuts in state public health funding.

What explains the paper’s hostility to Pence? Perphaps the part in bold below.

A staunch conservative and evangelical Christian, Mr. Pence was also known for promoting anti-abortion legislation during his time as governor, including a law that, among other things, required that miscarried or aborted fetuses be cremated or interred. Women expressed outrage about the law on social media in a campaign that became known as #periodsforpence.

Compare Goodnough’s instant hostility to Pence with the hosannas that greeted Ron Klain, former aide to Vice President Joe Biden and political operative, as Obama’s “Ebola czar.” There was no criticism of Obama appointing a political fixer to help solve a public health crisis in Alan Rappeport’s flattering October 2014 profile “Ron Klain: At Home in the Halls of Power.” Rappeport didn’t hold Klain’s utter lack of medical expertise against him.

The selection of Ron Klain as Ebola czar brings an experienced Washington hand and someone highly familiar with the workings of the Obama administration to the center of a growing health crisis. While Mr. Klain does not have medical expertise, he knows his way around the worlds of government and business.

And a vice president doesn’t?