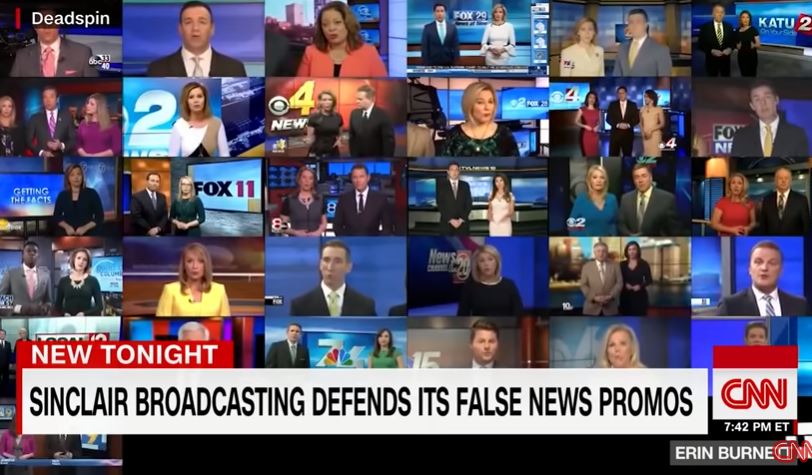 The New York Times, which dispenses unlabeled liberal reporting as slant every day, is keeping a wary eye on any conservative competition in the news business, eager to drop the “fake” label on their heads.

Friday’s Business pages included the warning, “Americans Trust Local News. That Belief Is Being Exploited,” by Dartmouth College professor of government Brendan Nyhan, who used to write for a liberal blog called Spinsanity. The URL includes the words “fake local news,” perhaps an artifact of a harsher previous headline.

The nature of the news misinformation problem may be changing. As consumers become more skeptical about the national news they encounter online, impostor local sites that promote ideological agendas are becoming more common. These sites exploit the relatively high trust Americans express in local news outlets -- a potential vulnerability in Americans’ defenses against untrustworthy information.

After noting misinformation distributed by the infamous Russian Internet Research Agency, Nyhan found “dubious outlets” on only one side of the political divide.

All of them originate with a company called Locality Labs L.L.C., which created similar networks of questionable local websites in Illinois and Maryland, and state and local business and legal sites around the country. There’s little information about these sites. They typically lack mastheads, local addresses and clear disclosure of their ownership or revenue sources.

Voters could easily become confused about the origins of information from these seemingly innocuous local-sounding outlets. In 2016, for example, websites in the Illinois network interviewed Republican candidates favored by a conservative state political committee, which then paid to mail print newspaper versions of the sites to voters without identifying them as political advertising.

Covertly ideological local sources aren’t exclusively online. The media giant Sinclair has similarly blurred the lines between local and national journalism in television news. When local stations are acquired by Sinclair, a recent study shows, their news content becomes more nationally focused and more conservative. The company often issues so-called must-run national segments, such as a recent commentary that sought to blame illegal immigration for sexual violence against children. And in March 2018, Sinclair directed local stations to air a promotional clip in which anchors read a company script denouncing “the troubling trend of irresponsible, one-sided news” as if they were using their own words, a tactic that was exposed in a viral clip.

(The mainstream press doesn’t need to coordinate their liberal messages – it has always come naturally to journalists.)

The Times has previously singled out Sinclair as a stand-alone example of political bias in the news, ignoring the broadcast networks, CNN, and MSNBC.

All of these outside groups seem to be trying to capitalize on people’s trust in local news. In the 2018 Poynter Media Trust Survey, the political scientists Andy Guess, Jason Reifler and I found that Americans express greater trust in news from local television and newspapers than from national outlets. This is especially true of Republicans, the partisan group that is most skeptical of the national media.

Nyhan is a professor of government at Dartmouth College and very occasional contributor to the paper’s blog “The Upshot,” not a news reporter, but in print the story looks like another news report. He tends not to delve into the very good ideological reasons why Republicans are so skeptical of the national media.

On Friday, Nyhan attributed doubts about the national press in general to misinformation campaigns, especially foreign ones. He ignored the left-wing, ideological bias angle, but uncovered all sorts of harmful right-wing bias at the local and national level (in the form of Sinclair Broadcasting Group). He concluded with outrage:

The prevalence of these impostors is likely to increase as the 2020 election approaches, threatening to mislead more voters and to promote greater skepticism toward all news media, including the local outlets that so many Americans rely on and trust.