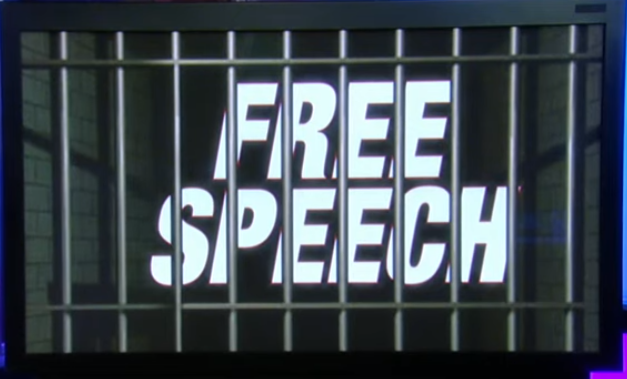 New Yorker staff writer Andrew Marantz’s new book, Antisocial: Online Extremists, Techno-Utopians, and the Hijacking of the American Conversation, is a nearly 400-page episode of moral panic about right-wing, anti-Semitic extremists on the Internet, who he blames for ushering in the Age of Trump.

Liberal journalists Jane Mayer and Chris Hayes provided back-cover blurbs, and Marantz has been making the liberal rounds, including Brian Stelter’s podcast, so you know where he’s coming from.

The book itself actually doesn’t go as far as his October New York Times essay, “Free Speech Is Killing Us.” Yes, he means it literally, calling for regulation of hateful social media memes and podcasts and forums on Reddit, which evidently directly caused ethnically motivated massacres in El Paso and Pittsburgh and New Zealand:

Having spent the past few years embedding as a reporter with the trolls and bigots and propagandists who are experts at converting fanatical memes into national policy, I no longer have any doubt that the brutality that germinates on the internet can leap into the world of flesh and blood.

The question is where this leaves us. Noxious speech is causing tangible harm. Yet this fact implies a question so uncomfortable that many of us go to great lengths to avoid asking it. Namely, what should we -- the government, private companies or individual citizens -- be doing about it?

Marantz wants the First Amendment to be as circumscribed as the Second Amendment.

Using “free speech” as a cop-out is just as intellectually dishonest and just as morally bankrupt.

And who decides what should be banned? Presumably, people who think like Marantz. That would certainly be convenient.

The book itself (as opposed to the op-ed) isn’t explicitly censorious, consisting mostly of interviews and profiles of a motley crew of conspiratorial, often anti-Semitic “alt-right” personalities, the memes they created, and the resulting bans from social media outlets. But it’s crammed with extraneous and dishonest attacks on conservative politicians, personalities, and publications, past and present. A few of his benighted observations:

Ronald Reagan played to racism in his Neshoba County Fair speech when he mentioned “states’ rights.” National Review founder William F. Buckley, a conservative gatekeeper against bigotry, “produced a good amount of it himself.” Matt Drudge was a “disreputable blogger” who committed the apparent sin of breaking news unfavorable to Democratic president Bill Clinton (Clinton’s affair with Monica Lewinsky, suppressed by the same responsible news media Marantz thinks so highly of).

Fox News “prime-time hosts often deliver racist messages that hardly qualify as dog whistles, so clear are they even to a casual listener.” Marantz must have incredible hearing, as the phrase “dog whistle” recurs like a verbal tic through this long book, 380 pages in an unusually small font. Even Canadian psychologist Jordan Peterson, popular on YouTube, is seen as kind of a gateway drug to the alt-right.

Marantz’s censorious streak occasionally surfaces, as when he actually asks “an anchor at a major TV network” in the fall of 2015 whether the Donald Trump juggernaut could be stopped by the press refusing to give him coverage: “The anchor and I were supposed to be members of the Fourth Estate, yet we felt powerless to do anything but watch the phenomenon unfold.”

Why would being a journalist entitle you to any kind of “power” to sway an election in the first place?

The anchor replied, in part, “First, there’s no way Fox News would participate in any blackout.”

Marantz confesses: “Of all that I resented about the Deplorables, one of the things I found most irksome was that they forced me to think like an establishment shill.” Yep.

In Antisocial, only one extreme is an existential threat. There is nothing on the violence of Antifa, or threats by radical transgender activists against feminists on Twitter, nothing on the anti-Semitic left online. Many of the figures he interacts with in Antisocial have had their own controversies, sometimes involving anti-Semitic or otherwise bigoted remarks. But when he talks to Jesse Jackson there’s no mention of his “Hymietown” comment. He sympathizes with April Ryan, White House correspondent for American Urban Radio Networks, whose bodyguard assaulted a journalist in August (albeit perhaps too late for inclusion in the book) .

There’s nothing on New York Times editor Tom Wright-Piersanti’s anti-Semitic tweets or Times editor Sarah Jeong’s anti-white tweets. The Southern Poverty Law Center is granted credibility, but its libelous “hate” designations of Muslim reformers are skipped. Violent rhetoric directed toward President Trump in works of art and even the New York Times are ignored. A single example, of a Trumpian Julius Caesar, assassinated by stabbing for the benefit of a Central Park crowd during an outdoor production of the titular Shakespeare play, is hand-waved away as mere “dramatic catharsis” for Trump haters.

His introduction to Chapter 15, in which he admits to searching for a fascist villain to fit his narrative, gives the game away: “For much of 2016, I searched for an extremist meme peddler to write about....none of them fit my needs.” His “needs” were evidently to use racist, anti-Semitic extremists to frame the entire conservative universe in an unflattering light.

Antisocial has some redeeming features. Marantz pits the “alt-right” against the “alt-light,” a useful distinction. He introduces us to some folks we hope to never meet again, in various states of denial or psychological damage. (He doesn’t find much gay-bashing, perhaps because a surprising number of alt-right figures are gay.) Still -- who appointed a left-wing writer in Brooklyn to decide what we should be able to watch, read, and write on social media?