September 27, 2018: It was not quite a year ago that the riveting hearing took place pitting the dueling testimonies of Supreme Court nominee Brett Kavanaugh and Christine Blasey Ford, who accused him of having sexually assaulted her at a gathering during high school. 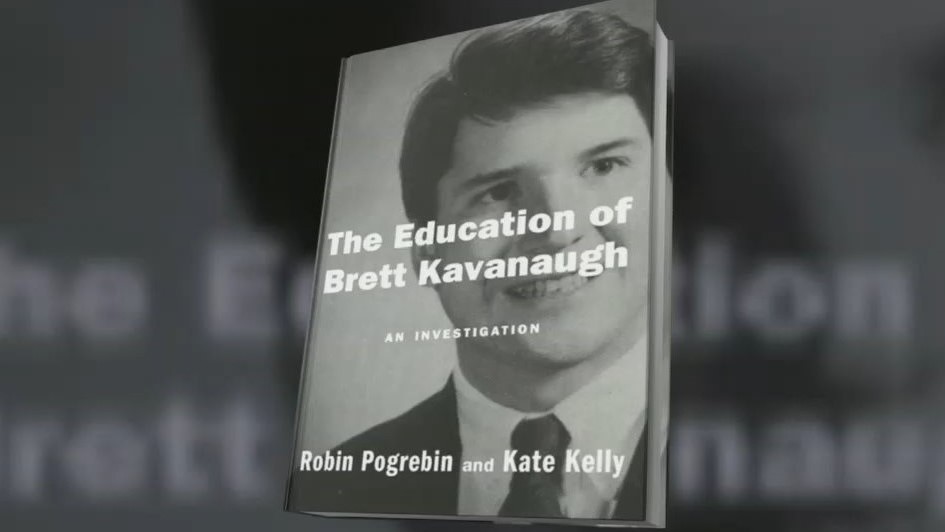 New York Times reporter Robin Pogrebin parlayed her slanted reporting on the case and her Yale connection (she was in the same freshman dorm as Kavanaugh, though nothing here is a personal account) into a book deal, with fellow reporter Kate Kelly. Both reporters contributed slanted anti-Kavanaugh reporting during the controversy, and retained the same tone for the book, The Education of Brett Kavanaugh – An Investigation.

The cover is a black-and-white yearbook photo of Kavanaugh, framed off-kilter to conveniently makes the judge look vaguely menacing. The dust jacket blurb makes it clear that the authors think the hearings (after which the Senate eventually narrowly confirmed Brett Kavanaugh) went wrong:

In September 2018, the FBI was given one week to investigate the charges against Brett Kavanaugh before he was sworn in to his lifetime position as the newest associate justice of the United States Supreme Court...many questions remained unanswered, leaving millions of Americans troubled and unsatisfied....The Education of Brett Kavanaugh challenges preconceived notions of truth and fairness, forcing us to rethink the personal prisms through which we viewed the shocking accusations made against the judge -- and the Senate’s decision to confirm him anyway.

But the book’s release was botched by an unforced error that showed how eager the paper was to use the book as an anti-Kavanaugh weapon.

An article “adapted” from the book ran in the paper on September 15, not just a cut-and-paste excerpt, but an article shaped as a separate story by the reporters, with extra intonations of the Yale class war hiding the second-hand flimsiness of what they unearthed. The results is half-baked sociology that you don’t get from the book itself.

But the “newsy” part was another accusation of sexual impropriety about Kavanaugh during a dorm party in his freshmen year at Yale, passed on by one Max Stier.

But the story quickly imploded back on the paper’s reputation, when Mollie Hemingway of The Federalist, who had secured an advance copy of the book, noted that the article irresponsibly left out vital information from the book -- that the woman who allegedly suffered the humiliation by Kavanaugh, one Tracy Harmon Joyce, refused to be interviewed, and that her friends say she had no recollection of the incident.

Which reduces the bombshell to mere campus legend and hearsay from Stier, who incidentally served as one of Bill Clinton’s lawyers opposite Kavanaugh during the Monica Lewinsky controversy, a fact totally unmentioned by the authors.

The paper was pressured to issue an Editor’s Note, which finally appeared in print the next Sunday. Given that the reporters had written a separate article just for the paper, it seems unlikely the omission was, as they claimed, a mere mistake in the editing process.

The authors were reduced to retweeting pathetic defenses of their hit piece from the left.

The authors tried to box in the "bro" Kavanaugh early in the book:

If Kavanaugh mistreated Ford and Ramirez but has conducted himself honorably in the past thirty-six years, does he deserve to be on the court?f there is not dispositive proof that Kavanaugh engaged in such misbehavior, were the accusations enough to eliminate him from consideration? Was his temperament during the last day of testimony in itself disqualifying?

None of those options gave Kavanaugh the presumption of innocence.

The chapter titles are rendered in Latin phrases for some reason, perhaps to lend the book some unearned gravitas (it’s surprising that Omerta wasn’t the name of a chapter.)

The authors admitted Kavanaugh “wasn’t easy to demonize,” then spent much of the rest of the book, especially the final chapters, doing so. They claimed his all-boys prep school risked “becoming a breeding ground in the early 1980s for a casual brand of misogyny.” They made his joking reference to a popular Las Vegas tourism slogan seem sinister: “What happens at Georgetown Prep stays at Georgetown Prep.”

The writers downplay Ford’s hazy memory about the alleged attack in a suburban Maryland home (she was unable to pinpoint the year or place), saying only “the details of that hasty departure are no longer clear.”

No incident in Kavanaugh’s life is too small to exaggerate:

In September 1985, Kavanaugh and a group of his friends came to blows with a local New Haven man at the bar Demery’s after attending a UB40 concert. Kavanaugh was questioned by the police after tossing the ice from his glass at the man.

That is a dramatic rendition of a nothing-burger scoop that backfired on the Times so badly, one is surprised to find it referenced here. It came courtesy of New York Times Magazine contributor Emily Bazelon, the Yale Law School professor who had no business doing reporting on the story, given her public hostility toward Kavanaugh. Later the authors claimed the ice incident showed Kavanaugh “helping provoke a bar fight.”

The reporters get awfully picayune, faulting the judge for his “grudging admissions of excessive boozing.” How many times and ways does Kavanaugh have to say he drank a lot in high school and college?

But as will be seen, the bias really kicked in when the book moved to Ford and Kavanaugh’s testimony.