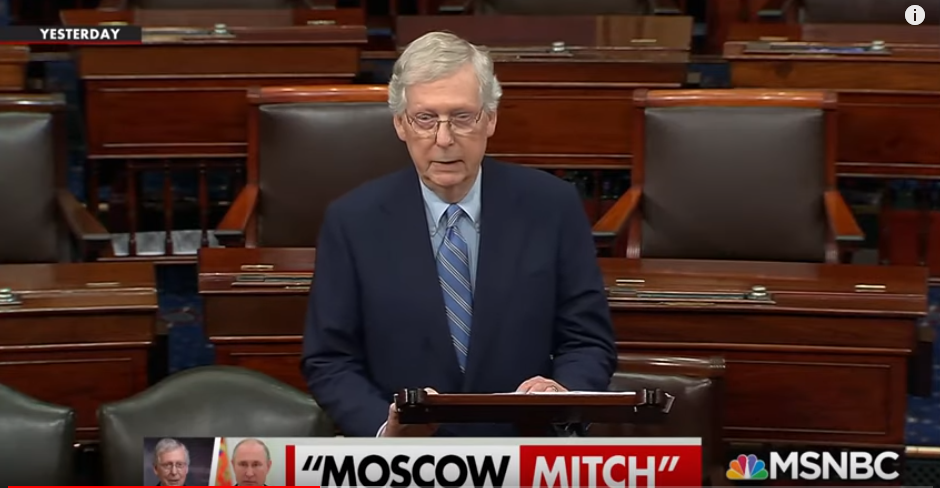 It’s Hulse’s favorite kind of story: Democrats gleefully putting Republicans under pressure, with Hulse cheering them on. Hulse tends to condone whatever political tactics the Democrats use against Republicans, however disreputable they might be.

Senator Mitch McConnell is usually impervious to criticism, even celebrating the nasty nicknames critics bestow on him. But Mr. McConnell, the Senate majority leader, is incensed by the name “Moscow Mitch,” and even more miffed that he has been called a “Russian asset” by critics who accuse him of single-handedly blocking stronger election security measures after Russia’s interference in 2016.

Democrats had been making the case for months, but it was supercharged last week by the testimony of Robert S. Mueller III, the former special counsel, who told the House Intelligence Committee that the Russians were back at it “as we sit here.”

Mr. McConnell cites several reasons for his opposition -- a longstanding resistance to federal control over state elections, newly enacted security improvements that were shown to have worked in the 2018 voting and his suspicion that Democrats are trying to gain partisan advantage with a host of proposals.

Republican colleagues say that Mr. McConnell, a longtime foe of tougher campaign finance restrictions and disclosure requirements, is leery of even entering into legislative negotiation that could touch on fund-raising and campaign spending.

But whatever Mr. McConnell’s reasoning, the criticism has taken hold -- even back home in Kentucky, where the majority leader faces re-election next year.

A photo caption emphasized how the insult (which would have been met with cries of red-baiting if attached to a Democrat) evidently drew blood: “Senator Mitch McConnell, the majority leader, is usually impervious to criticism. But 'Moscow Mitch' has left a mark.”

For once, Democrats seemed to be getting to a man who has embraced his portrayal as Darth Vader and the Grim Reaper overseeing a Senate graveyard for legislation that he opposes. When an unsubstantiated West Virginia Senate campaign ad in 2018 called him “Cocaine Mitch,” he began answering his Senate telephone with that identifier.

“Moscow Mitch”? Not so much: “I was called unpatriotic, un-American and essentially treasonous,” he fumed on the Senate floor.

Democrats pressed their advantage. And why not? The hashtag #MoscowMitchMcTraitor was trending on Twitter, and Senate Republicans of all stripes were being asked about the blockade.

Important context omitted from the gleeful pro-Democratic pile-on: What exactly did the Barack Obama administration do when it learned of the Russia interference in 2016, before the election? An NBC News investigation fact-check suggested Obama partisanship was in play:

The Obama administration didn’t respond more forcefully to Russian hacking before the presidential election because they didn’t want to appear to be interfering in the election and they thought that Hillary Clinton was going to win and a potential cyber war with Russia wasn’t worth it, multiple high-level government officials told NBC News.

With the focus on the issue intensifying, Mr. McConnell and Senate Republicans will face more pressure to act.

Mr. Schumer encouraged that idea Tuesday. “If McConnell wants to address election security in the appropriations process, we would welcome his support on an amendment to send more funding to the states,” he said. “We want to get something done on election security because this is not about party, this is a matter of national security.

Mr. McConnell said Monday that he would not be intimidated into acting on election interference.

He also will probably not be answering his phone “Moscow Mitch.”