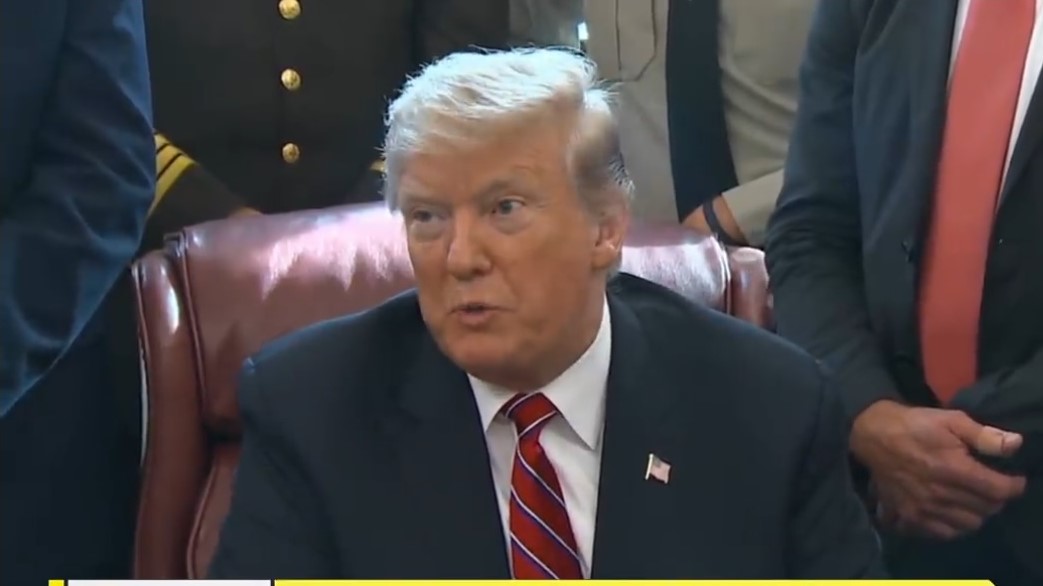 The online deck of headlines expanded on that sledgehammer point: It Isn’t Complicated: Trump Encourages Violence: “He doesn’t deserve blame for any specific attack. He does deserve blame for the increase in white-nationalist violence.”

The Times is engaging in one of its periodic freakouts over Trump’s rhetoric, trying to locate a surge in hate crimes that it can blame on the president. It’s part of the paper’s pattern of seeing anti-Semitism and other “hate crimes” solely on the right, actual evidence to the contrary notwithstanding. The column’s text box stated: “He deserves some blame for rising white-nationalist attacks.” This is the central argument:

It isn’t very complicated: The man with the world’s largest bully pulpit keeps encouraging violence and white nationalism. Lo and behold, white-nationalist violence is on the rise. You have to work pretty hard to persuade yourself that’s just a big coincidence.

What did Trump say this time? He made some questionable rhetorical flourishes about tough guys in an interview with the right-wing news site Breitbart, which nonetheless didn’t rise to the level of a “threat,” and certainly not the “white nationalist” threat Leonhardt tried so hard to prove. Leonhardt, the paper’s former Washington editor, earlier in 2019 called for Trump’s impeachment, so he’s not likely to give Trump a fair shake:

The president of the United States suggested last week that his political supporters might resort to violence if they didn’t get their way.

Leonhardt ran through some scattered Trump jokey references to violence over the last few years, like encouraging “police officers to bang suspects’ heads against car roofs" (in Leonhardt's paraphrase).

Of course, then candidate-Obama advised a Philadelphia audience in 2008 that when battling Republicans, “If they bring a knife to the fight, we bring a gun.” To the Times, that was merely Obama “showing a more pugnacious side.”

But they do matter. The president’s continued encouragement of violence -- and of white nationalism -- is part of the reason that white-nationalist violence is increasing. Funny how that works.

After Trump’s latest threat, I reached out to several experts in democracy and authoritarianism to ask what they made of it. Their answers were consistent: No, the United States does not appear at risk of widespread political violence anytime soon. But Trump’s words are still corroding democracy and public safety.

His latest incitement fit a historical pattern, and one with “scary echoes,” as Daniel Ziblatt, who co-wrote the recent book How Democracies Die, told me. Trump combined lies about his political opponents -- Democrats who need to be investigated (for made-up scandals) -- with allusions to a patriotic, violent response by ordinary citizens. Latin American autocrats, including Hugo Chávez in Venezuela, have used this combination...

So now the Times considers Chavez an autocrat? That makes a change.

After admitting hate crime statistics are “notoriously unreliable,” he then proceeded to devote the rest of his column to citing them as gospel.

Statistics on hate crimes are notoriously unreliable, but the evidence strongly suggests that they’re rising. The F.B.I.’s data shows an increase. The Anti-Defamation League reports a 73 percent rise in “extremist-related killings” during the last four years.

Not all attacks come from people who identify with the political right, obviously: The 2017 attempted mass murder of House Republicans on a baseball field is one horrific example. But most politically motivated attacks do indeed come from the right. Last year, 39 of the 50 extremist killings tracked by the A.D.L. were committed by white supremacists, and another eight were committed by killers espousing anti-government views.

Robert Cherry at National Review in December 2018 found some problems with the easy link between Trump rhetoric and violence, and questioned the ADL’s statistic gathering.

A closer look at the statistics, however, indicates that linking anti-Semitic acts to Trump’s rhetoric is problematic and much too one-sided. The ADL report found an almost doubling of campus incidents of bullying and harassment, for example, which are most likely associated with left-wing anti-Zionist forces....the ADL relies on reports it receives from a variety of institutions, and at least a portion of the increase in anti-Semitic acts reflected “more people...reporting incidents than ever before.”

The notion of a Trump-inspired rise in anti-Semitic crimes is also knocked down by the data showing similar levels during the Obama years, mostly ignored by the media because those facts didn’t provide any anti-Republican political traction.