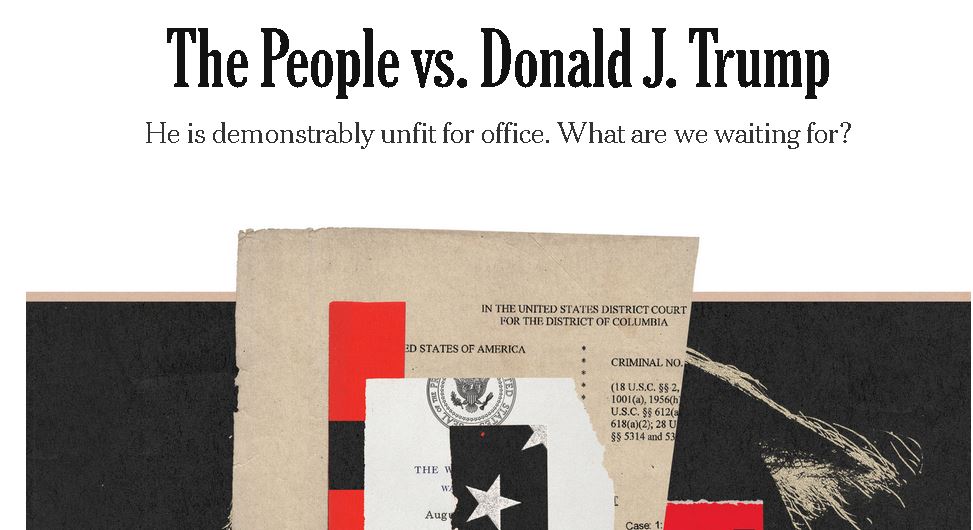 David Leonhardt made the front of the New York Times Sunday Review wanting Congress to hurry up with the vital task of impeaching President Trump in “The People vs. Donald J. Trump.” The subhead: “He is demonstrably unfit for office. What are we waiting for?”

Leonhardt, who was the paper's Washington bureau chief from 2011-2013, garnered front-page, over-the-fold placement in the prominent Sunday Review section for his long indictment, which came in several pieces:

The presidential oath of office contains 35 words and one core promise: to “preserve, protect and defend the Constitution of the United States.” Since virtually the moment Donald J. Trump took that oath two years ago, he has been violating it.

He has repeatedly put his own interests above those of the country. He has used the presidency to promote his businesses. He has accepted financial gifts from foreign countries. He has lied to the American people about his relationship with a hostile foreign government. He has tolerated cabinet officials who use their position to enrich themselves.

To shield himself from accountability for all of this -- and for his unscrupulous presidential campaign -- he has set out to undermine the American system of checks and balances. He has called for the prosecution of his political enemies and the protection of his allies. He has attempted to obstruct justice. He has tried to shake the public’s confidence in one democratic institution after another, including the press, federal law enforcement and the federal judiciary.

The unrelenting chaos that Trump creates can sometimes obscure the big picture. But the big picture is simple: The United States has never had a president as demonstrably unfit for the office as Trump. And it’s becoming clear that 2019 is likely to be dominated by a single question: What are we going to do about it?

....waiting is too dangerous. The cost of removing a president from office is smaller than the cost of allowing this president to remain.

He has already shown, repeatedly, that he will hurt the country in order to help himself. He will damage American interests around the world and damage vital parts of our constitutional system at home. The risks that he will cause much more harm are growing.

For the country’s sake, there is only one acceptable outcome, just as there was after Americans realized in 1974 that a criminal was occupying the Oval Office. The president must go.

Leonhardt dove into the far-fetched attack on Trump via the “emoluments clause” (an anti-corruption clause in the Constitution forbidding anyone holding office from accepting presents from foreign powers). Pivoting off that argument, he hung a lot of credibility on an awfully thin Russia-related reed based on Trump's campaign rhetoric.

Then, of course, there is Russia. Even before Robert Mueller, the special counsel, completes his investigation, the known facts are damning enough in at least one way. Trump lied to the American people during the 2016 campaign about business negotiations between his company and Vladimir Putin’s government. As president, Trump has taken steps -- in Europe and Syria -- that benefit Putin. To put it succinctly: The president of the United States lied to the country about his commercial relationship with a hostile foreign government toward which he has a strangely accommodating policy.

....the Trump administration is almost certainly the most corrupt in American history.

He wound up with pressuring Republicans in Congress, who surely hang on every word of wisdom emanated by Leonhardt.

Consider the following descriptions of Trump: “terribly unfit;” “erratic;” “reckless;” “impetuous;” “unstable;” “a pathological liar;” “dangerous to a democracy;” a concern to “anyone who cares about our nation.” Every one of these descriptions comes from a Republican member of Congress or of Trump’s own administration.

Leonhardt followed up on Monday with a column, “Trump the Vulnerable,” with the wishful hope “I think he is more vulnerable than many people realize.”