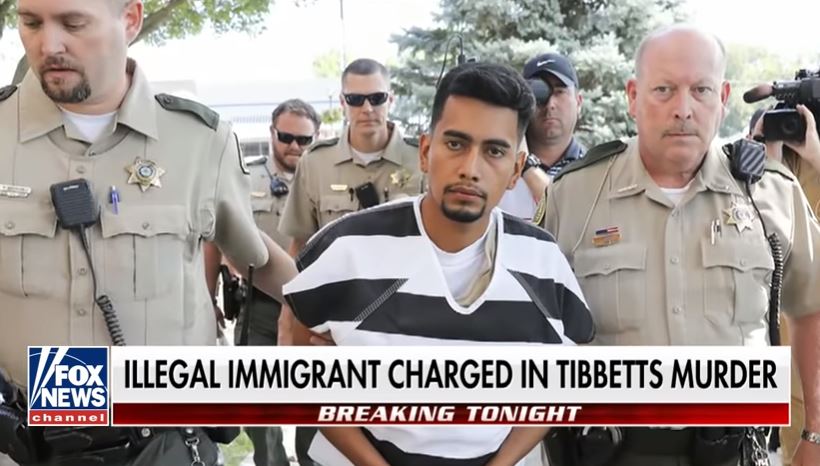 Saturday’s New York Times provided a soft profile of Cristhian Rivera, the accused killer of Iowa woman Mollie Tibbetts: “From Quiet Village in Mexico to a Lonely Furrow in an Iowa Cornfield.” It took nine reporters from across the United States and Mexico to capture this soft-focus portrait (whitewash?) of Rivera, the main reporters being Ann Klein, Mitch Smith, and Miriam Jordan.

Cristhian Bahena Rivera, the Mexican farmworker accused of killing a 20-year-old college student and concealing her body beneath corn leaves, seemed to have built a quiet, productive life in the seven or so years since he slipped across the southwest border and found work in the fields of Iowa.

He tended to dairy cows on a farm owned by a prominent family and returned home each evening to a modest brown trailer along a gravel road outside town.

But Mr. Bahena Rivera’s quiet demeanor sometimes stood out in jarring ways. A neighbor said he did not always follow the local custom of acknowledging him when Mr. Bahena Rivera drove by in a Chevy Malibu. And, more alarmingly, a woman said he made her uncomfortable with a romantic advance and repeated Facebook messages in the middle of the night.

The liberal media trope “seized” made its predictable appearance in paragraph six.

President Trump has cited the first-degree murder charge against Mr. Bahena Rivera as proof of the need for tougher border security. Iowa politicians and conservative news outlets have seized on the case as ammunition as November’s election nears. And here in Brooklyn, population 1,400, residents have struggled to understand how the man they saw at the grocery store could be tied to the death of Mollie Tibbetts, a psychology student and summer camp counselor who disappeared last month while out for a jog.

Mr. Bahena Rivera, who is jailed on a $5 million cash bond, was one of many Mexicans who have made their way to Iowa’s pastures, where farmers often struggle to find eligible workers to tend their crops and cattle. Mr. Bahena Rivera grew up in El Guayabillo, a village of unpaved roads some three hours’ drive from Acapulco on Mexico’s Pacific Coast, and attended the only elementary school in the village of about 400 people.

“A very good person, a simple guy with no vices,” Victor Manuel Nuñez Carbajal, who attended school with Mr. Bahena Rivera, said in a Facebook message. Neighbors told Univision network that his father tended his small corn plot and also milked dairy cows in the village, earning less than $10 a day.

His lawyer, Allan M. Richards, said Mr. Bahena Rivera had been a law-abiding employee since arriving in the United States....

Federal officials said they have no record of Mr. Bahena Rivera entering the country legally and said that he appeared to have used false documents to obtain employment.

The Times dwelled on his love for his former girlfriend:

Outside of work, Mr. Bahena Rivera started dating a Brooklyn high school student, Iris Monarrez, whom he met in 2013. Around 2014, they had a daughter. And for about a year, they lived together. Mr. Bahena Rivera once posted on Facebook that the day he met his girlfriend was “el mejor día de mi vida,” or “the best day of my life.” When she posted a photo of herself in 2015, he wrote in Spanish, “My beautiful cool princess.”

Residents said Mr. Bahena Rivera was an attentive father who was often seen playing with his daughter in the city park.