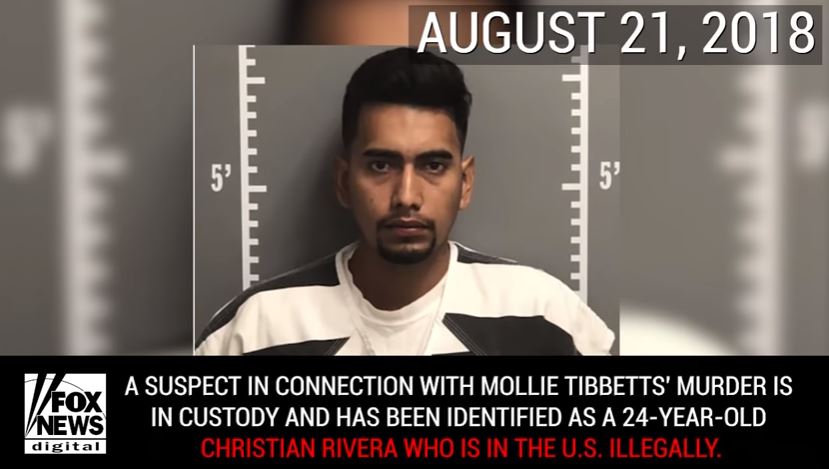 President Trump and congressional Republicans, who are eager to find an issue that can help minimize the losses they expect in the midterm elections, are leaning hard into crime, illegal immigration and public safety to paint a bleak picture of how the country would become less safe under a Democratic-controlled Congress.

The reliable liberal media incantation “seized” made an appearance in the next paragraph, "seized" and "pounced" being code words for “A Republican is bringing up an issue we would rather not have to talk about.”

This week, they sought to put a face with that picture. The news that a missing Iowa college student, Mollie Tibbetts, had been found dead, and that a man the authorities said was an undocumented immigrant was charged with her murder, was seized upon by Republicans, who had already been sounding dire warnings about spreading violence and insecure borders.

“A person came in from Mexico illegally and killed her,” said Mr. Trump, speaking about Ms. Tibbetts in a video he posted to Twitter. “We need the wall, we need our immigration laws changed, we need our border laws changed.”

The din of outrage coming from all sides -- on the left, accusations of callous exploitation and fearmongering; on the right, criticisms that political correctness is trumping public safety -- underlines the growing disparity between those who largely trust Mr. Trump’s diagnoses of the country’s problems and believe he and Republicans should be given more time to fix them, and those who are disgusted with his leadership and want to throw him and his party out of power.

The news of the break in the Tibbetts case on Monday was a tragic ending to her disappearance a month ago. But the timing, as far as Mr. Trump and his allies were concerned, could not have been better. Word that an immigrant had been charged in her death came the same afternoon that Mr. Trump’s longtime lawyer and fixer implicated him in a scheme to pay off alleged paramours and his former campaign manager was found guilty of eight counts of financial fraud.

Peters at least gave the right-leaning media its say.

Fox News set the tone for how prominently the Tibbetts story would feature in the media universe the president and his supporters follow most closely. As other networks covered the president’s growing legal exposure, Fox alone broke in with news of Ms. Tibbetts’s death. Its coverage of her disappearance, and of the discovery of her body, has been exhaustive, with correspondents on the scene in Iowa featuring in multiple segments every hour. On Wednesday night, the host who was filling in for Laura Ingraham opened the program by boasting, “Fox News is the only network fully covering the case.”

That most other major news outlets paid the story comparatively little attention only gave Mr. Trump more ammunition to make his case that the media cannot be trusted.

The paper is giving the accused killer’s lawyer the benefit of the doubt as to the state of his residency (calling him "undocumented"), and assured readers that “most social scientists” think “noncitizens” are less of a criminal threat than citizens.

That has not stopped Mr. Trump, his White House or its supporters from suggesting otherwise....Violent crimes by immigrants have become staples in conservative media, and Breitbart News and Fox News often lead the way....

Some members of Ms. Tibbetts’s family have objected to the swift politicization of her death. “I don’t want Mollie’s memory to get lost amongst politics,” an aunt, Billie Jo Calderwood, told CNN. Samantha Lucas, a second cousin who told CNN that she did not know Ms. Tibbetts well, said she believed Ms. Tibbetts “would not want this to be used as fuel against undocumented immigrants.”

Yet the paper didn’t hesitate a millisecond before politicizing the school shootings in Parkland, Fla. to push stricter gun-control measures.

Peters himself previously accused the Republican Party of playing politics with the scandal of the IRS targeting the Tea Party, and the investigation into the massacre of four Americans in Benghazi, both under President Obama’s watch.