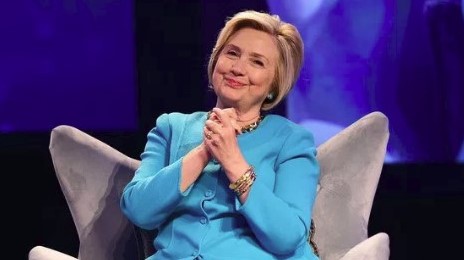 Bye-bye Hillary? Clinton-beat reporter (and reliable Clinton cheerleader) Amy Chozick’s profile on the front of the New York Times Sunday Review featured the headline “Without Her.” It was a regretful (possible) goodbye to Hillary the high-profile feminist heroine, while crediting her with igniting the #MeToo movement, and postponing mention of her inconvenient husband as long as possible.

Hillary Clinton, the first woman who had a real shot at the presidency, has finally set off a national awakening among women. The only catch? She did it by losing.... We wouldn’t be here -- black gowns at the Golden Globes, sexual assault victims invited to the State of the Union address, a nationwide, woman-led voter registration drive timed to the anniversary of the Women’s March -- without Mrs. Clinton’s defeat.

Odd that a reporter would downplay her own paper’s scoop about the depredations of Hollywood producer Harvey Weinstein to boost Hillary Clinton.

And yet, for Mrs. Clinton, it’s the latest -- and perhaps last -- cruel twist in a public life full of them. Her loss to Mr. Trump helped ignite the kind of movement she’d once been poised to lead but that she now mostly watches from the sidelines.

She took a delicate approach to Hillary and “her husband’s personal scandals.” Chozick dubiously credited Clinton, “the bookish, dutiful woman,” for the rising number of women seeking office, before finally addressing the "Bill" elephant in the room.

But on issues of sexual assault, Mrs. Clinton has remained mostly muted, her hands tied as liberals rethink how President Bill Clinton’s accusers were dismissed and shamed in the 1990s. Even the #StillWithHer crowd seems to agree that the #MeToo movement cannot feature Mrs. Clinton.

In November, Patti Solis Doyle, a senior aide to Mrs. Clinton from 1991 to 2008, published an article on CNN’s website in which she said she didn’t take the allegations of sexual harassment and assault against Mr. Clinton as seriously as she should have.

In the days after several Hollywood actresses told The Times and The New Yorker that Mr. Weinstein, a longtime donor to the Clintons, had harassed or assaulted them, Mrs. Clinton denounced his behavior, saying she was “shocked and appalled by the revelations.”

But Chozick rallied around:

A debate ensued, with feminists asking why Mrs. Clinton always seemed to be held responsible for the badly behaving men around her....

A conservative point slipped through:

Conservative critics argue that a second Clinton administration would have allowed Mr. Weinstein to maintain his status as Hollywood kingmaker and powerful Democratic donor....

Chozick balanced that out with an unlikely liberal nightmare -- that a Clinton win would have led to “a backlash against ambitious women” like Hillary. She then sorrowfully nudged Hillary out the door: “...allies of Mrs. Clinton see something tragic about the Trump era, and the resistance mounting against it, as the final note to her public life.”