New York Times in Denial on Liberal Bias: We Play It ‘Straight Down the Middle’

New York Times White House correspondents Maggie Haberman and Peter Baker were joined in Washington, D.C., by executive editor Dean Baquet in a conversation on covering the Trump administration moderated by media columnist Jim Rutenberg. About 33 minutes into the October 12 talk, the subject turned to liberal bias, and there were the usual evasions and denials.

Baker played dumb by suggesting readers were getting the editorials confused with the news: “The truth is, like, I understand--I understand the bias question, I get it, I understand. First of all, we have a newspaper whose editorial page happens to be liberal, and therefore there is a natural assumption, and I get what people think, that must therefore automatically bleed into the pages. I had a very senior White House official one time, not this administration, tell me, you can’t tell me that it doesn’t affect your opinion, what’s on the editorial page every day when you write your story. Not only I can tell you that -- I can swear on a stack of Bibles, I don’t read it.”

Baker made a small admission of possible personal bias, along with the big denial of reporting bias: “Which I don’t. I don’t read our editorials. No offense to our great editorial writers. I make a point of not reading our editorials. If it were up to me, we wouldn’t have editorials because I think it confuses readers into thinking that we are a liberal paper. I don’t consider myself to be a liberal and I don’t think most people I work with consider themselves particularly ideological. I don’t hear them express ideological opinions. I hear them express journalistic opinions, like, we ought to do this story, this is an important story, this is an important target for scrutiny, this is an important mission for us. If we are biased, we are biased toward conflict, and that’s a reasonable debate to have in our industry, how much we are overly wedded to that. But, and I’m not going to deny that more reporters are probably more liberal than they are who are conservative in their private lives. But the ones I know at the New York Times are as professional as they come.” 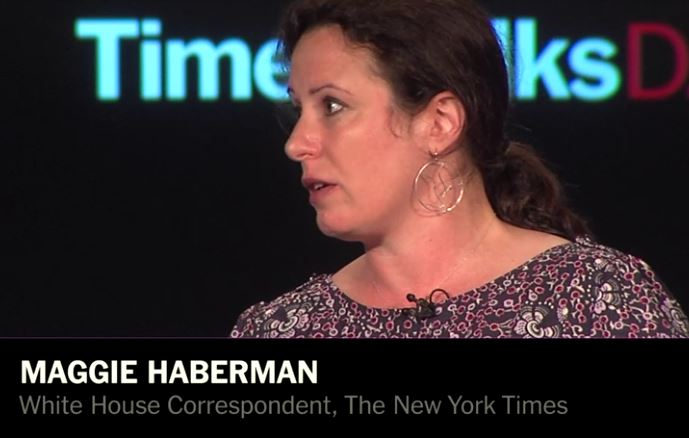 Maggie Haberman was confident her paper played fair because some lefties on Twitter have somehow convinced themselves that the Times is in the tank for Trump: “....I think that I agree with Peter. The only editorial page I read is the Wall Street Journal, and it’s because I just want to understand what is the mind of Rupert Murdoch who advises the president. That’s why I read it. And you can usually tell it as a bit of a weather vane.

But I think that we, I think we try and play this straight down the middle, and frankly, I mean, going back to Twitter, but any given day if you look at Twitter, which admittedly I’m not doing this week that much but if you do -- I doubt it’s changed in a week this much --we are either in Hillary pocket or in Trump’s pocket and because 2016 is still going on, p.s., it’s not actually ended. But I think that’s a mark of us being pretty straight.”

Baker isn’t the most biased Times reporter, but he’s made plenty of Newsbusters appearances, while Haberman is a virtual regular.