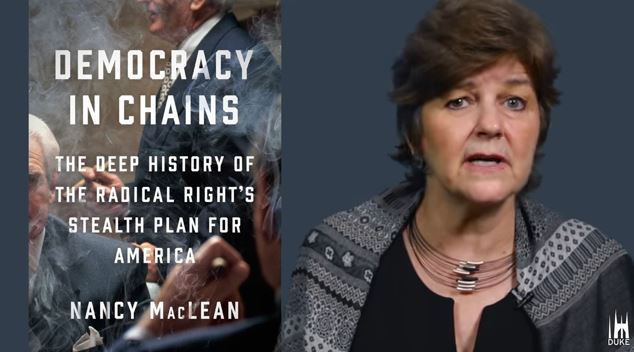 Unprofessional all around: The decision by the New York Times Sunday Book Review to publish a laudatory notice of Democracy in Chains: The Deep History of the Radical Right’s Stealth Plan for America. At this point, the grievous flaws of the work, flushed out by critics on the left and right, should have required that any review come with a warning label.

Yet even months after criticism of the book upon its release, from outlets across the political spectrum, the Times still ran a review by Heather Boushey of Duke professor Nancy MacLean’s deceitful history of the free-market movement and Nobel-winning “public choice” economist James Buchanan in particular. Predictably, the Koch Brothers stood in as modern-day Enemy No. 1 in the left’s fevered imaginings. The online headline: “How the Radical Right Played the Long Game and Won.”

MacLean’s book has been discredited even at left-leaning sites like Vox, although some gullible GOP-loathers, like former NYT book editor Sam Tanenhaus, now at The Atlantic, eagerly latched on.

Under the subhead “Conspiracy theory in the guise of intellectual history,” professors Henry Farrell and Steve Teles excoriated MacLean’s premise at Vox:

MacLean, however, doesn’t want to explain how public choice economists think and argue. Instead, she portrays them as participants in a far-reaching conspiracy. She describes how a movement of “fifth columnists” that “congratulated itself on its ability to carry out a revolution beneath the radar of prying eyes” is looking to fundamentally undermine American democracy. She uses cloak-and-dagger language to suggest that she was only able to uncover the key files explaining what was going on because someone failed to lock “one crucial door” to a half-deserted building on George Mason University’s campus. (George Mason is the site of an unlisted and then-disorganized archive of Buchanan’s papers.)

In language better suited to a Dan Brown novel than a serious nonfiction book, she describes Buchanan as an “evil genius,” and suggests he had a “diabolical” plan to permanently “shackle” democracy, so that the will of the majority would no longer influence government in core areas of the economy....

And many fatal flaws in the book have been spotted by conservative journalists. David Bernstein gives many reasons to be dubious about the book’s veracity at the Washington Post, and a professor colleague of MacLean, Michael Munger, devastatingly showed that her book was “speculative historical fiction” when she turned the Nobel winning economist James Buchanan into a racist Bond villain, not a scholar motivated by a love for individual liberty.

And then there are MacLean's own paranoid postings in defense of her shoddy scholarship, blaming, you guessed it, a Koch Brothers conspiracy.

Boushey, an economist at a left-wing think tank, was oblivious to all that embarrassing history as she gushed over MacLean’s book.

After an opening anecdote displaying a voter telling a pollster that being an obvious liar is a good thing in a politician, Boushey awkwardly segued into her review proper.

Insight into this conundrum comes from an unlikely source, the life’s work of the economist James McGill Buchanan -- who happens to be the subject of a new book, “Democracy in Chains: The Deep History of the Radical Right’s Stealth Plan for America,” by the historian Nancy MacLean. Buchanan, who was born in 1919 and died in 2013, advanced the field of public choice economics into politics, arguing that all interest groups push for their own agenda rather than the public good. According to this view, governing institutions cannot be trusted, which is why governing should be left to the market.

Buchanan won the Nobel Memorial Prize in Economic Science in 1986 for “his development of the contractual and constitutional bases for the theory of economic and political decision making.”

Buchanan, however, also had what MacLean calls a “stealth” agenda. He knew that the majority would never agree to being constrained. He therefore helped lead a push to undermine their trust in public institutions. The idea was to get voters to direct their ire at these institutions and divert their attention away from increasing income and wealth inequality.

This is the sordid tale that MacLean lays out in “Democracy in Chains.” She starts with Buchanan’s early engagement in policy work in the late 1950s, when he offered to help the state of Virginia respond to the federal mandate to desegregate public schools….

Buchanan decided he needed to influence policy at a deeper level. In the ensuing years, he sought to lead an economic and political movement in which he stressed that “conspiratorial secrecy is at all times essential” to mask efforts to protect the wealthy elite from the will of the majority….

We know all of this because MacLean found documentation of Buchanan’s plans --including correspondence, meeting minutes and personal papers -- in his previously unexplored archives. She came upon her biographical subject “by sheer serendipity,” she writes, while researching how the state of Virginia responded to the Brown v. Board of Education decision. Seeing the name of an unfamiliar economist eventually led her to rooms full of documents that made clear how “operatives” had been trained “to staff the far-flung and purportedly separate, yet intricately connected, institutions funded by the Koch brothers and their now large network of fellow wealthy donors.” Buchanan’s papers revealed how, from a series of faculty perches at several universities, he spent his life laying out a game plan for a right-wing social movement.

There's a single mild tidbit where Boushey gently suggested the book isn’t flawless, that MacLean lets her contempt for her subject get in the way just a little bit.

....her overt moral revulsion at her subject can sometimes make it seem as if we’re getting only part of the picture.

Boushey compares MacLean’s book favorably to that of yet another Koch hit, Jane Mayer’s “Dark Money,” and in an embarrassing move, actually cites a book by Teles, the political scientist who co-wrote the withering takedown of MacLean for Vox!

With this book MacLean joins a growing chorus of scholars and journalists documenting the systematic, organized effort to undermine democracy and change the rules. In “Dark Money,” Jane Mayer tells the tale of the Koch brothers….The political scientist Steven M. Teles writes about the chemicals magnate John M. Olin in “The Rise of the Conservative Legal Movement.”

She concluded with hope.

….Perhaps as books like MacLean’s continue to shine a light on important truths, Americans will begin to realize they need to pay more attention and not succumb to the cynical view that known liars make the best leaders.