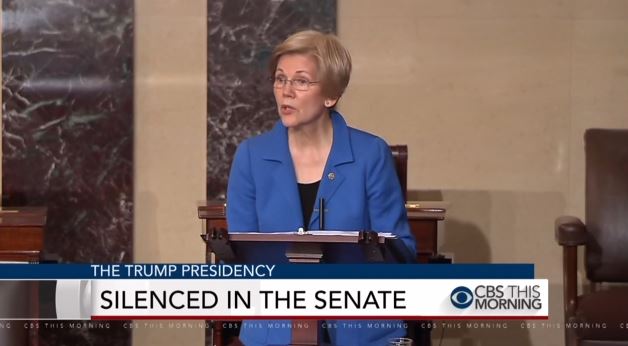 Senate Majority leader Mitch McConnell may have temporarily silenced Democratic Senator Elizabeth Warren, formally rebuking her for breaking Senate rules in her demagogic criticism of her colleague Sen. Jeff Sessions, before he was confirmed as President Trump’s attorney general. But the New York Times won’t shut up until Warren is seen by everyone as a feminist heroine.

Times reporter Matt Flegenheimer set up the liberal senator for future glory in Thursday's “Silencing Warren, G.O.P. Amplifies Her Message.” The text box: “Catapulted into the role of avatar of the liberal resistance.”

Republicans seized her microphone. And gave her a megaphone.

Silenced on the Senate floor for condemning a peer, Senator Elizabeth Warren, Democrat of Massachusetts, emerged on Wednesday in a coveted role: the avatar of liberal resistance in the age of President Trump.

Late on Tuesday, Senate Republicans voted to halt the remarks of Ms. Warren, already a lodestar of the left, after she criticized a colleague, Senator Jeff Sessions, the nominee for attorney general, by reading a letter from Coretta Scott King.

Instantly, the decision -- led by Senator Mitch McConnell, the majority leader, who invoked a rarely enforced rule prohibiting senators from impugning the motives and conduct of a peer -- amplified Ms. Warren’s message and further inflamed the angry Senate debate over Mr. Sessions’ nomination. He was confirmed on Wednesday.

For Ms. Warren’s supporters, it was the latest and most visceral example of a woman muzzled by men who seemed unwilling to listen.

Critics saw something else: a senator who has rankled members of both parties with her nose for the spotlight lobbing a far-too-early salvo in the next presidential race.

Flegenheimer boosted the liberal cause:

Mr. McConnell’s subsequent explanation for his maneuver seemed destined for a future Warren campaign ad: “She was warned. She was given an explanation. Nevertheless, she persisted.” After an unsuccessful effort to draft her for the 2016 presidential race, Ms. Warren is considered a very early front-runner for 2020, should she run.

After the vote to bar Ms. Warren from speaking further about Mr. Sessions, other senators, including Bernie Sanders of Vermont and Tom Udall of New Mexico, read Mrs. King’s letter without facing any objection, prompting some activists to raise charges of sexism.

Ms. Warren has long displayed an instinct for capitalizing on highly visible fights. After she was barred from speaking on the Senate floor, she began reading the 1986 letter from Mrs. King on Facebook. By Wednesday evening, the video had attracted more than nine million views.

And by midafternoon, a fund-raising email from Ms. Warren had arrived in the inboxes of her supporters.

“I’m still banned from speaking on the Senate floor -- but there’s still time for you to make your voice heard,” the email read, with a link to a page for contributions.

She signed off with a familiar message: “Keep fighting.”

Meanwhile, Susan Chira, a “senior correspondent and editor on gender issues” for the paper, used the incident to make a wider claim of rampant sexism in Washington: “Elizabeth Warren Was Told to Be Quiet. Women Can Relate.”

Was there a woman who didn’t recognize herself in the specter of Elizabeth Warren silenced by a roomful of men?

The explosion of indignation, mockery and free publicity that greeted Tuesday night’s move to prevent Senator Warren from reading a letter about Senator Jeff Sessions written by Coretta Scott King resonates with so many women precisely because they have been there, over and over again. At a meeting where you speak up, only to be cut off by a man. Where your ideas are ignored until a man repeats them and then they are pure genius -- or, simply, acknowledged.

Being interrupted or ignored, and being one of the few women in the room, can be both inhibiting and enraging. You check your own perception: Was I being too aggressive, or did I really have a point? Is this about being a woman, or something else?

Raising questions of a double standard, male Democratic senators including Bernie Sanders of Vermont and Jeff Merkley of Oregon later read into the record the very same letter that Senator Warren was reading when the Senate voted, along strict party lines, to ban her from further debate on the nomination of Mr. Sessions as attorney general.

At least Chira made her feminist critique “bipartisan.”

Yet talking over women, or shutting them down, is a bipartisan exercise. During the Obama administration, women in the White House banded together to work on “amplification,” taking care in meetings to repeat other women’s points and give women credit for ideas they had first raised.

Loren DeJonge Schulman, who worked 10 years at the Department of Defense and the National Security Council in the Obama administration, has vivid memories of watching men bridle as senior women challenged them. “The constant allegation from the Department of Defense was that the National Security Council was micromanaging them,” said Ms. Schulman, now a senior fellow at the Center for a New American Security. “Is it really micromanagement, or are you complaining about women nagging?”

Indeed, Senator Mitch McConnell’s condescending defense of the vote to silence Senator Warren prompted the creation of a social media meme and new rallying cry: “She was warned. She was given an explanation. Nevertheless, she persisted.”